Israeli Defense Minister Benny Gantz traveled this week to Azerbaijan on the backdrop of growing tensions with Iran and Jerusalem’s desire to deepen strategic, security and economic ties with Baku. 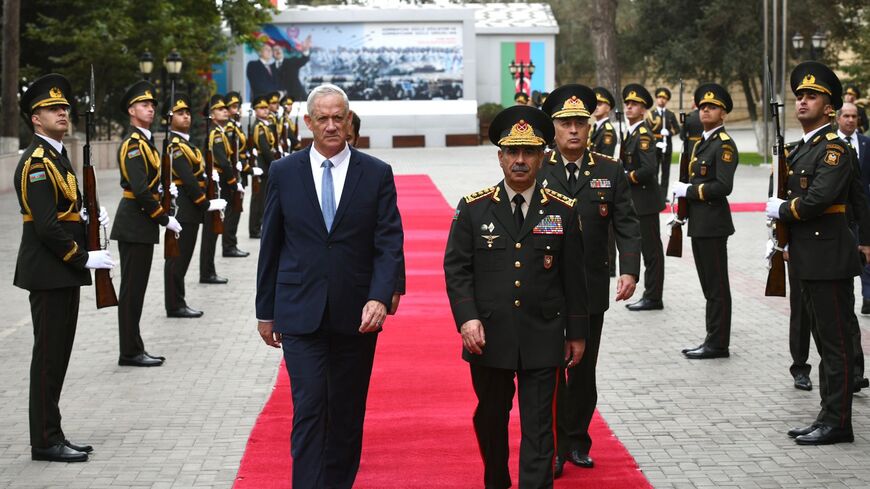 A statement from Gantz’s office said the visit focused on security and policy issues with the aim of fostering defense cooperation between Jerusalem and Baku. Gantz, it read, used his visit to “emphasize the importance of maintaining strategic relations between the State of Israel and the Republic of Azerbaijan” and “reflected on the changes in the Middle East region following the signing of the Abraham Accords.” It noted that Gantz and his dialogue partners also “discussed Israel’s developing ties with Turkey and additional countries in the region and the world.”

Israel and Azerbaijan established diplomatic relations 30 years ago. Ties are mostly economic, with Israel importing fuel from Azerbaijan, and security oriented, with Azerbaijan purchasing Israeli weapons and technology. Israel is the largest supplier of weapons to Azerbaijan. According to the Stockholm International Peace Research Institute, some 60% of Azerbaijan’s defense imports in 2015-2019 originated in Israel, while in 2020, that number jumped to almost 70%.

Israel’s security exports to Azerbaijan also cost it unpleasant headlines. In 2020, Armenia accused Azerbaijan of using Israeli-manufactured drones against it after Azeri official Hikmet Hajiyev said on TV that the military had been using Israeli-made attack drones.

Finance Minister Avigdor Liberman traveled to Azerbaijan last May amid the Russian invasion of Ukraine and the global wheat crisis. Officially, the visit was intended to discuss economic issues, particularly the increased importation of petroleum and other products to Israel. The visit was also clearly intended to strengthen the security relationship between the two states.

Israel's desire to deepen ties with Azerbaijan is about more than trade. Israel also considers Azerbaijan’s proximity to Iran an important strategic asset in the event Israel opts for military action against Iran.

Another sign of deepening ties came to light this week when the Israeli government approved an emergency plan to receive Jews fleeing from Russia. The plan involves possible transition camps for Russian Jews in Finland and in Azerbaijan ahead of their arrival to Israel.