Ali Karimi’s name is being chanted out loud by his fans on the street since the day he threw his support behind the ongoing anti-government protests in Iran that started Sept . 16. 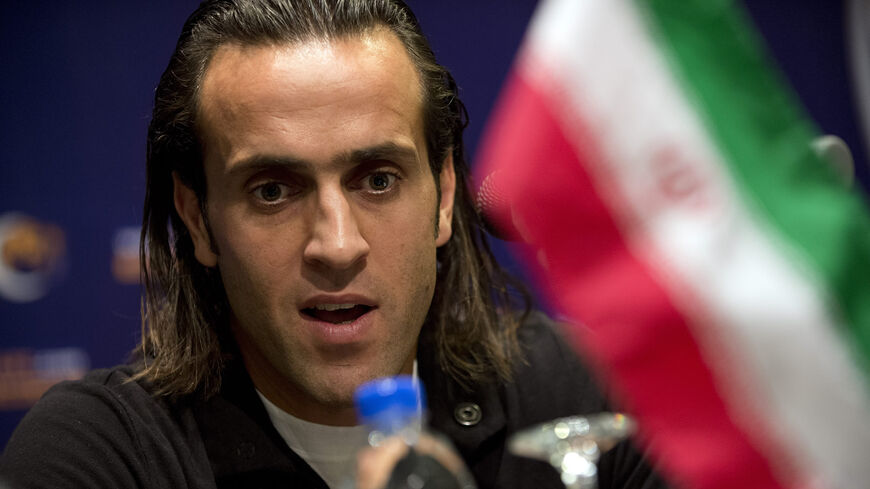 Ali Karimi, a nominee for AFC Player of the Year, speaks at a press conference in Kuala Lumpur, Malaysia, Nov. 28, 2012. - Saeed Khan/AFP via Getty Images

A correspondent in Tehran
October 3, 2022

TEHRAN — Iranian officials have taken aim at Ali Karimi, a legendary and highly popular former soccer player who has been speaking in defense of nationwide anti-government protests in Iran, sparked by the Sept. 16 death of Kurdish woman Mahsa Amini, 22, in custody of Tehran’s “morality police,” for violating hijab laws.

“The prosecutor-general should enter the case of Karimi’s accusations against the entire system and the lies he spreads on social media,” stressed Hossein Ali Haji Deligani, who is a member of parliament and member of the Judiciary Committee within Iran’s Islamic Consultative Assembly. In an interview with the Islamic Revolutionary Guard Corps-affiliated Fars news agency published Sept. 30, he called on the judiciary to put Karimi “on trial.”

The 43-year-old former captain of Iran’s national soccer team has capitalized on his nearly 13 million followers on Instagram and Twitter to express his support for the protests in Iran and hit back at claims made against him.

Last week, hard-line cleric and former member of Iran’s parliament Hamid Rasaee called for the seizure of Karimi’s assets in Iran. Speaking to Iranian state TV Sept. 25, he compared the athlete to exiled Turkish soccer star Hakan Sukur, whose belongings were confiscated on charges of supporting the failed 2015 coup in Turkey, demanding the same for Karimi.

One day after the comments, images circulated on social media of barriers placed at the entrance of a villa, said to have been owned by Karimi, in Lavasan, northeast of the capital Tehran. “According to the order of respected judicial authorities, this property is sealed until further notice,” read a banner on the cement block, though a day later, cranes were seen lifting the block from there. Authorities did not comment on the decisions.

Fars news agency claimed that initial findings indicate Karimi had sold or handed over the majority of his properties before leaving Iran, without elaborating further or providing evidence. Karimi lived in Iran until June 2022 before traveling to Dubai, where he is currently stationed.

The soccer star wrote in reaction that “a house without land is worth nothing,” and that “I’d sacrifice that for the people,” following the news of the actions against the villa.

On Sept. 28, pictures circulated of a Karimi statue vandalized by unknown people overnight in his birth place of Karaj.

Despite Iranian authorities’ repeated threats against famous figures supporting the protests, Karimi has been posting his messages of solidarity, encouragement and condolences to victims on his social media accounts around the clock. In one case, he even shared some tips to bypass filtering amid internet restrictions aimed at crushing the protests.

Many Iranian athletes have supported Karimi by resharing his stories or directly defending his positions, including former captain of Iran’s national team Mehdi Mahdavikia, former soccer players Karim Bagheri and Voria Ghafuri, and veteran wrestling champion Rasoul Khadem. Fans admired his fierce criticism of authorities in the aftermath of a deadly tower collapse in the Iranian city of Abadan in May as bold and compassionate. Karimi’s popularity on Instagram increased dramatically from 9.4 million followers in August to nearly 13 million by the end of September.

Often referred to as the Asian Maradona and “the magician” for his on-the-ball skill and fast dribbling, Karimi has a history of professional honors and controversies. The attacking mid-fielder scored 38 goals in 126 matches he played for the Iranian national team before retiring from his 18-year career in 2014. In 2004, he won the title of Asian Footballer of the Year. Besides, he played for Bayern Munich and Schalke 04 in 2005-2007 and 2011, respectively. His controversial remarks against corruption in soccer and symbolic gestures during the games saw him suspended or even dismissed from the national team on a couple of occasions, although he was always recalled shortly after.

In one controversial move, he wore green wristbands, along with a group of teammates, in a World Cup qualifying match against South Korea in July 2009. The gesture was interpreted as the national team’s support for presidential candidate Mir Hossein Mousavi, who had accused the Ministry of Interior of manipulating the June 12 election in favor of incumbent Mahmoud Ahmadinejad. The disputed vote morphed into unprecedented anti-government protests, known as the Green Movement, named after Mousavi’s campaign color, which were met with deadly clampdown across Iran.