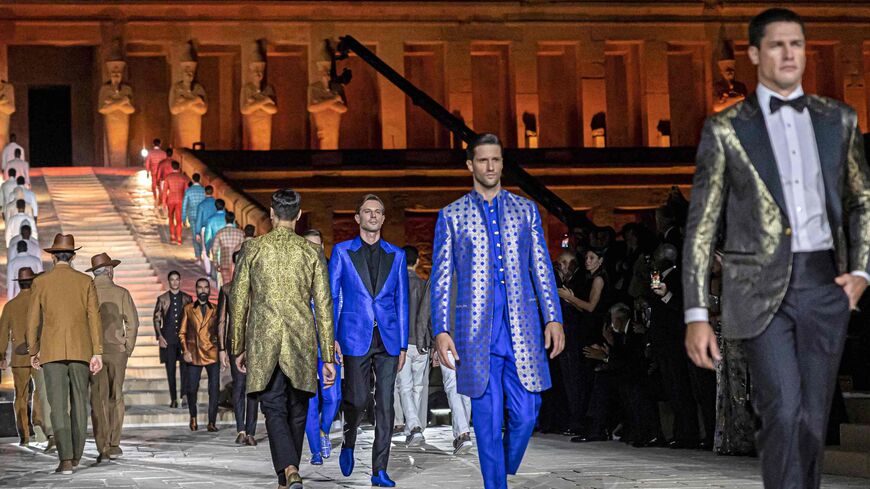 Models present creations by Italy's iconic fashion house Stefano Ricci at the temple of the Ancient Egyptian Pharaoh Hatshepsut on the west bank of the Nile river, off Egypt's southern city of Luxor, on Oct. 9, 2022. - KHALED DESOUKI/AFP via Getty Images

CAIRO — From the dazzling royal palaces of Cairo to the iconic pharaonic temples of Luxor and the emblematic pyramids of Giza, Egypt has started to position itself in recent months as the venue of choice for major international fashion brands to hold large fashion shows.

And meanwhile, Egyptian authorities are trying to seize the opportunity to attract the world’s attention, highlight the diversity that the country has to offer as a tourist destination, and open up a new avenue along the way to promote a key economic sector.

“Egypt has what it takes to organize unforgettable events. Archaeological sites, temples, the pyramids — beautiful places that can host them,” Amr El-Kady, CEO of the Egyptian Tourism Authority, told Al-Monitor.

The last of these major events were held on the evening of Oct. 9 on the west bank of the city of Luxor, where more than 350 guests from all over the world gathered to attend the 50th-anniversary celebration of the Italian luxury fashion house Stefano Ricci.

The temple of Hatshepsut, which was specially illuminated for the occasion, served as a backdrop for the catwalk of models who paraded down its exterior stairs dressed in outfits from the fashion designer. The event was attended by Italian tenor Andrea Bocelli, who opened the ceremony with arias from Verdi’s Aida opera, set in ancient Egypt.

“I chose to celebrate the 50th anniversary of my brand in a magnificent city, full of charm, art and traditions,” Ricci was quoted as saying in the announcement of the event. “For the first time in history, the Hatshepsut Temple will be the exquisite stage on which my fashion show will be performed. Having received this privileged authorization from the Egyptian institutions, [it] is a source of pride for me,” he added.

“The event of Stefano Ricci was really very important because it helps to promote tourism to Egypt, it shows that Egypt is safe and that people should come, and it also shows our archaeological sites for the first time in [such] a beautiful way,” Egypt’s former antiquities minister Zahi Hawass, who attended the event, told Al-Monitor.

Before Stefano Ricci, it was the prestigious Lebanese designer Elie Saab who held a fashion show in the Abdeen Palace in downtown Cairo in late 2021 to unveil its signature villas in a luxury compound developed by the real estate company Emaar Misr. The event was attended by the then-Egyptian Minister of Tourism and Antiquities Khaled El Enany.

Dior resumed last year its tradition of presenting its men’s pre-fall collections in different parts of the world with an event in London, and the company has previously held fashion shows in countries such as Italy, Greece, South Korea, China and the United States, but not in Egypt,  the fashion news website WWD reported. Jones has also staged presentations of his collections in cities such as Miami and Tokyo in the past, but never in Cairo.

All these events fall within the framework of a new branding strategy devised by the Egyptian Ministry of Tourism and Antiquities to show the diversity of experiences that Egypt has to offer to potential visitors at any time of the year, Kady said.

The idea, he added, is to show the world the most artistic and creative side of the country through fashion shows, but also art exhibitions, film festivals, concerts and sports events.

Kady said that the starting point for this branding strategy goes back to the celebration of Cairo’s Golden Parade and Luxor’s Sphinx Avenue Parade last year, which became a great promotion of both Egypt and its capacity to organize major events.

“That’s when international brands started to talk to us. Because they have seen these mega-events and the perfection with which they have been produced,” Kady, who is one of the officers in charge of the new strategy, said.

“We promoted tourism to Egypt but also our abilities and those of Egyptian companies from the private sector to organize such big events,” he added.

In addition to promoting general tourism in the country, Kady noted that the aim of this new branding strategy is also to attract specific, high-income visitors. He also advanced that the ministry is in talks with other international fashion houses to hold more such events in the near future, although he did not offer further details.

“The attendees for Stefano Ricci’s show all came in a private jet. [We want to attract] that kind of elite, high-standing tourism. [It’s] very good for luxury tourism in Egypt, which is growing now,” Kady said.