The Turkish president’s controversial economic policies have led to rare public criticism by a business group that has long backed his party. 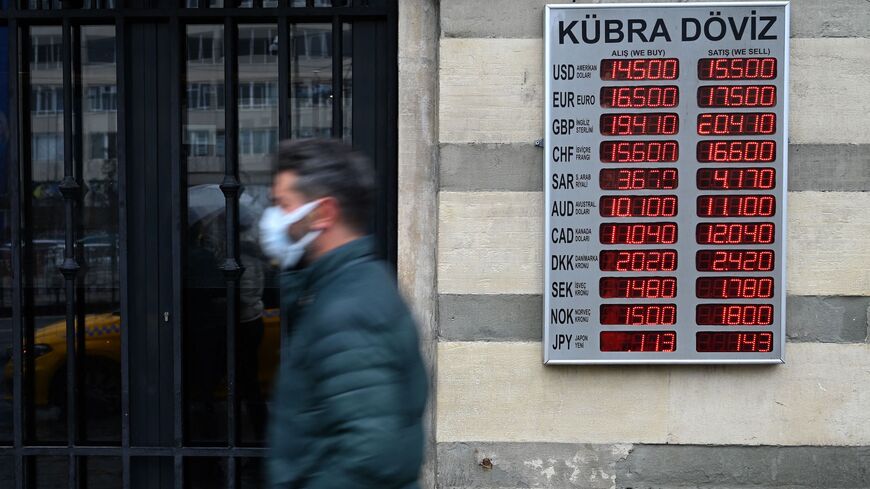 A man walks in front of a screen showing rates against Turkish lira near a currency exchange agency at Kaarakoy in Istanbul on Dec. 16, 2021. - OZAN KOSE/AFP via Getty Images

In a rare public disapproval of Ankara’s ways, MUSIAD chair Mahmut Asmali grumbled last week about economic uncertainty, including the central bank’s policy rate, though he backed Erdogan’s push to lower the rate to single digits by the end of the year. A series of unorthodox cuts have brought the rate down to 12% from 19% over a year despite inflation topping 80%.

“We, too, are tired of talking about interest rates and rate cuts,” Asmali told the financial daily Dunya, suggesting that the rate should be cut to 9% in October or November with an assurance that it would not be touched again in the short run. “Let’s stop talking about rates and look ahead,” he said. “Industrialists and producers are averse to uncertainty. Let’s achieve stability and move ahead.”

The MUSIAD head also complained that private banks, in particular, “should open the loan taps to those who produce and create jobs. And the central bank’s financing here should be longer-term, not weekly,” he said.

Heeding pressure from Erdogan, who holds the unconventional view that high interest rates cause high inflation, Turkey’s central bank began to cut its 19% policy rate in September 2021, when inflation stood at about 20%. Four cuts in as many months brought the rate to 14% in December. The controversial policy fueled a rush for dollars, with the Turkish lira slumping about 50% against the greenback in the same period. To stop the collapse of the currency, Ankara introduced a special deposit scheme at the expense of straining public finances. Under the scheme, the treasury and the central bank compensate lira depositors for any losses they incur from the depreciation of the currency.

The fall of the lira, coupled with global inflationary pressures, continued to stoke prices, with consumer inflation hitting 83% in September. Still, the central bank delivered two fresh cuts in August and September to bring its policy rate to 12%, going against a global monetary tightening cycle. This has led to an unprecedented gap of 71 percentage points between the bank’s benchmark rate and consumer inflation. But Erdogan remains determined to avoid economic contraction or recession ahead of elections next year and insists on further rate cuts.

With the central bank widely expected to comply, observers now wonder whether it will gradually reduce the rate to 9% by year-end or go for a single big cut, as MUSIAD suggests. The answer might come on Oct. 20, at the next meeting of the bank’s monetary policy committee.

Like other business people, MUSIAD members also worry that a too-generous hike of the minimum wage in December would aggravate employers' costs. Though they have not spoken out publicly on the issue, they are reportedly cautioning Ankara. Nearly half of the country’s wage-earning employees are paid the minimum wage or slightly higher salaries.

The government has already shown it will not shy away from populist spending to woo voters despite spiraling inflation. Scrambling to boost its sagging popular support ahead of elections in June 2023 at the latest, the government is reportedly readying to raise the minimum wage, public salaries and pensions at rates above the official inflation figure.

Labor and Social Security Minister Vedat Bilgin pledged last week the minimum wage hike would “wipe away the damage that inflation has inflicted on laborers.”

Anticipation has built that the minimum wage — raised to 5,500 liras (about $300) in July — could jump to between 8,000 and 9,000 liras in December, well above the roughly 7,000 liras that the official inflation rate would require. Some speculate the government might go even for 10,000 liras to win over voters.

Employers, however, are uneasy about the extra burden they would have to shoulder. The current 5,500-lira minimum wage costs 7,603 liras to employers, when social security premiums and other fees are included. The business community is apprehensive also that such hikes could further stoke inflation.