US again approves most aid to Egypt despite rights concerns 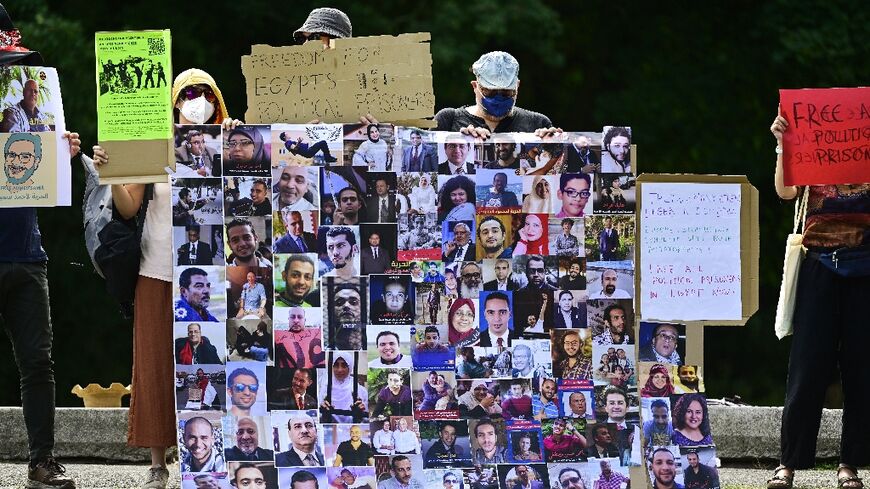 Demonstrators hold portraits of people they say are political prisoners as they demonstrate against the visit of Egypt's President Abdel-Fattah al-Sisi to Berlin in July 2022 - John MACDOUGALL
Agence France-Presse
September 14, 2022 — Washington (AFP)

Secretary of State Antony Blinken finalized a package of $1.17 billion for Egypt, which has been one of the largest recipients of US assistance since it became the first Arab nation to normalize relations with Israel in 1979.

Blinken decided to direct a portion of aid, $130 million, away from Egypt after determining it did not meet rights standards.

But he gave the green light to the rest, partially under an exemption to assist counter-terrorism efforts and also after certifying that Egypt "is making clear and consistent progress" on due process for prisoners.

"This step recognizes the significant efforts underway through the presidential pardon committee and the national political dialogue, even against the backdrop of very significant concerns about fundamental freedoms in Egypt," a senior official said on condition of anonymity.

The official said the Biden administration believed that Egypt was "vital" to a number of hotspots including Gaza, Libya and the Horn of Africa.

Some of Biden's political allies have pressed for a wider cutoff of aid to Egypt, which rights groups estimate is holding more than 60,000 prisoners of conscience.

Senator Chris Murphy, a Democrat, scoffed at the idea that Egypt was making progress and earlier this week called on the administration to withhold more funds.

"If you're going to be an ally of the United States, you shouldn't be locking people up for political speech," he said in a speech on the Senate floor.

But the Biden administration quickly found a partner in Egypt when it helped broker a ceasefire last year following fighting between Israel and Hamas, the Islamist militant movement that controls the Gaza Strip.

Egypt next month will also play host to the COP27 UN meeting on climate change, a key priority for Biden.

Murphy in his speech noted that Egypt has kept working with the United States, including over Gaza, despite professed anger over the holdup of aid a year ago.

"Why? Because all of these areas in which we engage are beneficial for the Egyptians. They don't do it as simple payback for our aid," Murphy said.