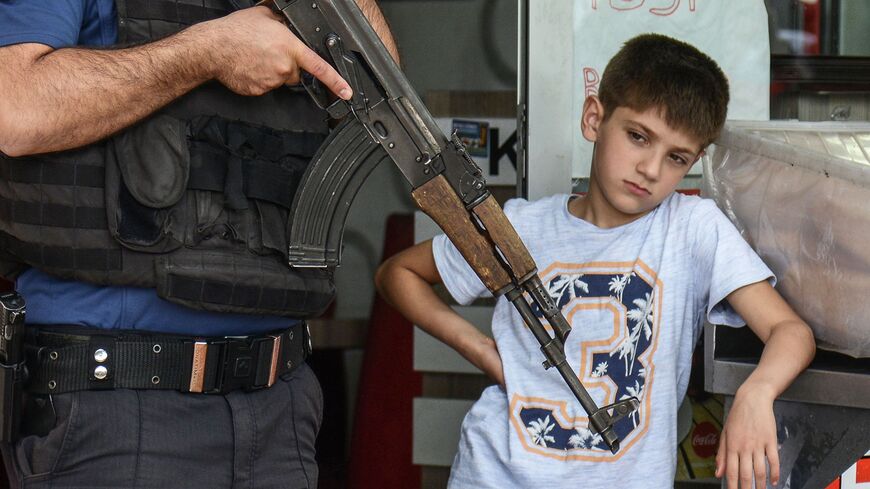 A boy looks on next to a police officer holding a Kalashnikov assault rifle during a demonstration in solidarity with Kurdish hunger-striking prisoners in Diyarbakir on May 24, 2019. - ILYAS AKENGIN/AFP via Getty Images

ISTANBUL — Thirteen-month-old Kaan Tas was being pushed around a garden by his sister when she noticed blood coming from his head. He died a short while later, the latest young life lost to gun crime in Turkey.

The Tas family was visiting the southern city of Gaziantep when Kaan was hit in the head on Tuesday evening by a “tired bullet” — a round fired into the air, usually at celebrations such as weddings or send-offs for men starting their military service. The phenomenon is widespread in Turkey and is one of the problems of growing gun ownership, according to campaigners calling for tougher restrictions and penalties on weapons.

Erkan Aydin, a lawmaker from the Republican People’s Party (CHP), recently said guns kill 15 people a day in the country of 84.7 million.

In a question submitted to Interior Minister Suleyman Soylu earlier this month, Aydin said media reports showed 3,801 armed incidents last year, a 75% increase on 2015. The vast majority involved firearms, of which there are 25 million in circulation, he added.

“Are you doing any work to prevent personal weaponry?” he asked Soylu. “Do you plan to change the legislation to cut down on personal weapons? Are you researching the reasons for the increase in violence in society?”

The Umut Foundation, which campaigns against gun violence, held a “March of the Shoeless” in Istanbul Wednesday. The shoes of gun violence victims from across Turkey were laid on a red carpet to remember them.

“We have friends among us who have experienced great suffering,” said the foundation’s president, Ozben Onal. Her mother established the foundation after Onal’s brother Umut was killed by a gun in 1993 at the age of 17.

“Since legal regulations have not been created and measures have not been taken, personal gun ownership continues to increase every year as a result of people being able to buy weapons from the internet with just a click,” she added. “As a result of increasing personal weaponry, dozens of people are injured and killed every day. Many of our innocent people are harmed, especially with weapons that are recklessly fired into the air during weddings, soldiers’ celebrations and other entertainments.”

Nearly 628,000 people possess five-year licenses to keep or carry a gun in Turkey, but many more are thought to own unlicensed weapons.

Timur Demirbas, an Umut Foundation board member and law professor at Yasar University in Izmir, called for tougher law enforcement.

“Unlicensed handguns and shotguns are very common,” he said. “It’s estimated that there are 20 to 25 million guns [in Turkey] and approximately 4,000 people are victims of crimes committed with weapons each year. Effective punishment is required. We have laws that envisage various criminal sanctions [but] the most important thing is that the controls are carried out effectively by law enforcement.”

Gun laws were relaxed last year and eligibility criteria to obtain a license were expanded to several new professional areas. In Turkey, only people work in certain professions are eligible to obtain a gun license.

He also called for jail terms of up to 25 years for those who kill by firing guns into the air.

Seventeen-year-old high school student Busra Konyar was killed by such a bullet two years ago while shopping in Tokat in Turkey’s Black Sea region. Her killer was sentenced to nearly six years in prison but was released after serving just eight months.

“She was a brilliant, intelligent 17-year-old girl who treated everyone equally, did not hurt anyone, looked at life with joy and had dreams,” her mother Naksiye said at Wednesday’s demonstration. “She left behind a grief-stricken father and mother and two embittered siblings. Everywhere I look, I see my Busra. The activities we did with her, the places she sat, slept and traveled never leave my mind. I take the last clothes she wore, I smell them. No matter how upright her father stands, he secretly cries in his bed at night.”

Many other families share similar stories. Often, the perpetrator cannot be found.

“We lost our 15-year-old son to a bullet. It’s not clear who fired it,” he said. “The pain is indescribable. Think about it: When a person goes to bed in the evening, does he pray to be able to see his child in his dream?  That’s what we're going through. When we wake up in the morning, we go to his room saying, ‘God willing, it’s a dream,’ but it’s not.”