The Takeaway: Hopes dim for Iran deal before US midterms 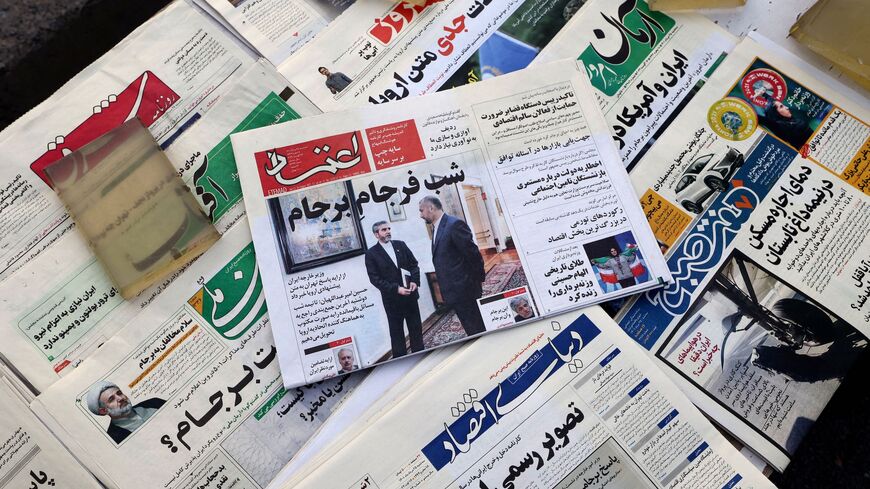 A picture shows a newspaper stall with a view of Etemad newspaper's front page bearing a title in Farsi, "The night of the end of the JCPOA" and cover photos of Iran's Foreign Minister Hossein Amir-Abdollahian and his deputy and chief nuclear negotiator, Ali Bagheri Kani, in the capital Tehran on Aug. 16, 2022. - ATTA KENARE/AFP via Getty Images

The Iran deal isn’t doomed, but expectations are low that an agreement will be reached before the November midterms.

A senior European source told Ali Hashem this week a deal won’t happen before the elections, if at all. “Because of the last Iranian response, there can be no return to the [Joint Comprehensive Plan of Action] before the midterms,” adding that the longer the wait, the more risk there is to close the deal.

The Europeans may be seeking to keep the pressure on Iran, while Washington may be more inclined to wait, especially with elections in both United States and Israel fast approaching.

Israeli Prime Minister Yair Lapid said Tuesday it’s too soon to know whether his government’s efforts to kill the deal paid off, reports Rina Bassist. But according to The Times of Israel, President Joe Biden told Lapid that an Iranian nuclear agreement is off the table at least for the foreseeable future.

Moving “backwards.” Iran and the United States in recent weeks appeared close to a breakthrough in the talks that had been deadlocked since March. But last Thursday, the US said Iran’s latest response to the EU-drafted text aimed at reviving the multilateral accord was “not constructive.”

Chief EU diplomat Josep Borrell then said he was “less confident” about the prospects of quickly closing a deal. On Wednesday State Department deputy spokesperson Vedant Patel said it was “unfortunate that Iran's response to us took us backwards.” The US is currently reviewing Iran’s proposal and will send its feedback to the EU soon, Patel said.

Meanwhile, Tehran’s nuclear program is moving ahead. The IAEA reported on Wednesday that Iran’s stockpile of highly enriched uranium has grown considerably in recent months, and the country continues to stonewall inspectors on outstanding safeguards issues.

Limbo period. Despite the recent setback in the negotiations, both the U.S. and Iran have a strong interest in keeping the prospect of a deal alive, said Henry Rome, the Eurasia Group’s deputy head of research.

“There's a reluctance on both sides to declare that the approach over the last 18 months has failed,” Rome said. “And so we are stuck in a bit of a limbo period, where neither side is moving decisively towards the finish line, but also no one wants to call it quits.”

Suzanne DiMaggio, a senior fellow at the Carnegie Endowment for International Peace, agrees neither side is likely to admit defeat should the negotiations become deadlocked.

“If creative diplomacy is unable to jumpstart renewed momentum, a temporary time out is likely,” said DiMaggio. “As precarious as it is, the JCPOA is the only readily available basis for negotiations with Tehran. It’s hard to imagine starting something from scratch in today’s geopolitical environment.”

Sept. 12 - Next week in Vienna, the IAEA will hold its quarterly Board of Governors meeting. Given the sensitive nature of the negotiations, the board isn’t expected to censure Iran for its failure to cooperate with inspectors, as it did in June.

Sept. 19 - World leaders including Biden, Lapid and most likely Iranian President Ebrahim Raisi will descend on New York City that week for the UN General Assembly. The administration has faced Republican pressure to deny Raisi a visa but has indicated it would grant one in line with its UN obligations.

Nov. 1 - Israel will hold its fifth election in less than three years. Staving off the nuclear deal would be a boost for Lapid’s candidacy, as former Prime Minister Benjamin Netanyahu runs to the right of Lapid, including on Iran.

Nov. 8 - Congressional unease with the possible deal is mounting ahead of the crucial midterm elections. US lawmakers are largely powerless to stop the agreement’s revival, but under a 2015 law can still register their disapproval.

Tension has been mounting between Hamas’ political leaders and the Islamic Jihad movement over the deaths caused by Islamic Jihad’s rockets fired at Israel. Senior sources who attended an Aug. 22 meeting between the two groups’ leaders in Gaza City said that Hamas called on Islamic Jihad to financially compensate the families of the civilian victims who were killed by its rockets that accidentally fell inside the Gaza Strip. The sources said Islamic Jihad refuses to do so and denied that any of its rockets landed in the impoverished Palestinian enclave. Our correspondent in Gaza writes that deaths from local rockets are “one of the most sensitive issues affecting the relationship between Palestinian society and the armed resistance factions.”

2. Netanyahu, Liberman face off before elections

There’s a long list of former Benjamin Netanyahu aides who have turned against him. But as Ben Caspit writes, “the greatest friend-turned-foe, an almost mythological nemesis and the Netanyahu family’s ultimate demon, is Avigdor Liberman, currently Israel’s finance minister.” As Israel heads for its latest election in November, it is Liberman who could stand in the way of Netanyahu’s determined comeback. The former prime minister needs two additional Knesset seats to reach a 61-seat majority, and his latest game plan calls for preventing Liberman’s party from gaining sufficient votes. But with two months to go before the elections, will Netanyahu’s anti-Liberman campaign succeed?

As Egypt gears up to host the COP27 United Nations climate conference in Sharm el-Sheikh this November, the government has rolled out a series of environmental initiatives, reports Hagar Hosny. They include a new campaign that aims to raise awareness of how nature reserves help preserve biodiversity. Cairo has also announced plans to plant 100 million trees in an effort to double the per-capita share of green spaces. Each tree will have a special code, similar to a birth certificate, which will include information on the tree, such as its age, type and quantity of carbon dioxide it absorbs.

Qatar estimates its hosting of the FIFA World Cup this November will bring as much as $17 billion in profits. And as Sabena Siddiqui reports, the football tournament’s economic impact will extend beyond the tiny Gulf state. Neighboring countries, including the United Arab Emirates, will become a base for the tens of thousands of football fans flocking to Doha. Even Iran expects a spurt in tourism and has reached a series of agreements with Qatar to host World Cup attendees.

Hayat Tahrir al-Sham, the powerful militant group that controls parts of northwest Syria, has allowed the reopening of a church in Idlib countryside months after HTS leader Abu Mohammed al-Golani met with the area’s Christian community. HTS provided security as Christians gathered to celebrate Saint Anna’s Day at an Armenian Apostolic Church on Aug. 28, a decade after the church’s closure. Its reopening sparked anger and criticism among jihadists who had defected from HTS. But as Khaled al-Khateb explains, Golani’s recent outreach to Idlib’s Christians is likely an effort to brand himself as a moderate.

Join Al-Monitor PRO on Thursday, Sept. 8 at 11 am ET for a live Q&A webinar with Rama Chakaki, who will discuss the nexus of innovation, AI and social impact in the Middle East.

Ben Caspit speaks this week with Amir Tibon, who serves as deputy editor for Haaretz’s English edition, about prospects for a revived Iranian nuclear agreement.