Palestinian Authority steps up arrests in Nablus under Israeli, US pressure

Clashes broke out between the Palestinian security forces and citizens in Nablus, in the wake of the arrest of a wanted person by Israel, in a move further deepening the popular anger against the Palestinian Authority. 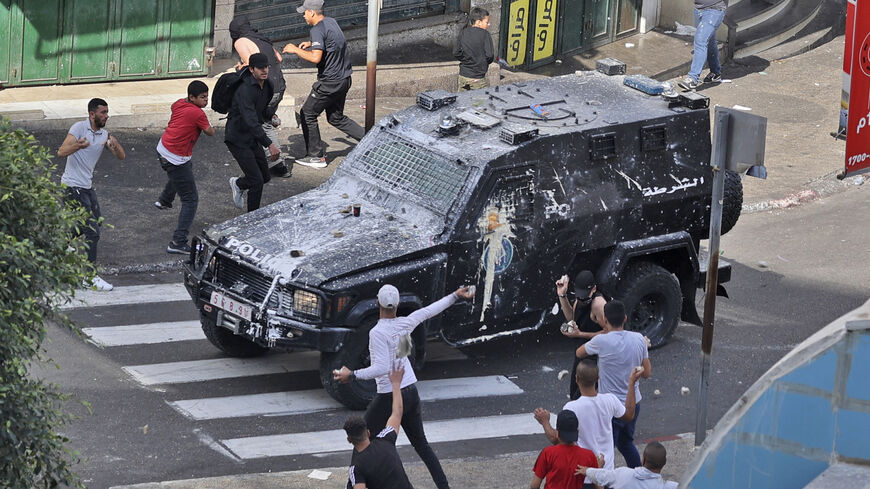 RAMALLAH, West Bank — In a tight-knit ambush Sept. 20 in Nablus in the northern West Bank, Palestinian security forces arrested two Hamas fighters — Musab Shtayyeh, who is high on Israel’s most wanted list and had survived several assassination attempts, and Ameed Tbaileh, who is also wanted by Israel.

The arrest raised the ire of resistance fighters in Nablus, Jenin and several camps in the West Bank, prompting violent confrontations with the Palestinian Authority (PA) security forces. The clashes led to the killing of a 53-year-old man from Nablus and the injury of dozens of others.

The following day, on Sept. 21, the security forces and Palestinian fighters reached an agreement to end the fighting, under the brokerage of local figures and the so-called Factional Coordination Committee in Nablus, which includes all PLO factions.

Under the agreement, a committee shall be formed to follow up on Shtayyeh’s case with the security services, and the security forces would cease to arrest those wanted by Israel in Nablus, release those who were arrested during the clashes and refrain from prosecuting anyone who took part in them.

Ghassan Hamdan, spokesman for the Factional Coordination Committee in Nablus, told Al-Monitor that the agreement does not include any guarantees or clear texts for its implementation, whether regarding the release of Shtayyeh or the commitment to refrain from pursuing those wanted by Israel in the West Bank.

He said that a committee will be formed to visit Shtayyeh in prison, check on his health condition and follow up on his case and the cases of those who participated in the clashes.

Hamdan noted that the agreement aimed to contain the situation and prevent its expansion.

The agreement, he added, achieved relative calm in the city of Nablus and ended the confrontations, but it seems too weak to prevent a recurrence of similar events, especially if the PA resumes the arrest of Palestinians wanted by Israel.

Hours after the agreement was reached, the security services launched a new campaign of arrests in Nablus, detaining dozens of individuals whom the PA claims were involved in acts of vandalism and robberies during the clashes. Their families have denied these allegations.

The Lawyers for Justice group, which is following up on their case files, said in a Sept. 23 statement on its Facebook page that these arrests, which targeted 19 people, were political.

The group condemned the security forces, saying that the agreement that ended the clashes in Nablus “was nothing but empty words.”

On Sept. 22, the PA’s General Intelligence Service announced the seizure of a weapons-manufacturing workshop in Hebron governorate and the confiscation of equipment and special parts used for the manufacture of weapons.

The Israeli Kan channel said in a tweet on the same day, “The Palestinian intelligence stormed a workshop in Hebron, which produced Carlo-type weapons and M16 rifles, and they confiscated all the weapons there.”

The channel quoted a Palestinian source as saying that the workshop had sold weapons to be used against Israel.

Israel’s Channel 12 reported Sept. 23 that the Israeli army handed over to the Palestinian security services a list of the names of militants from Nablus who were being pursued by Israel to arrest them, in a serious test of its work.

It seems the PA tried to promote the arrest of Shtayyeh as a great achievement. Speaking on a Channel 12 TV program, the channel’s correspondent quoted Palestinian sources as saying, “Musab Shtayyeh is a figure that carried out strategic missions for Hamas in the city of Nablus. He was also Israel’s assassination target two months ago for recruiting Hamas members with Iranian funding and recruiting members of the security services, and he bought weapons and ammunition for $1 million.”

The PA security services’ move to confront the resistance in the West Bank came in light of the Israeli army’s increasing raids in Nablus, while threatening to invade the city.

The move also follows several meetings held by Palestinian officials, including head of the PA’s General Intelligence Service Majed Faraj and Minister of the General Authority of Civil Affairs Hussein al-Sheikh, with Israeli and US officials, during which the latter put pressure on the Palestinian security services to play their role in controlling security in the West Bank, while publicly criticizing the weakness of the PA’s security forces.

Suleiman Bisharat, director of the Yabous Center for Consulting and Strategic Studies, told Al-Monitor, “The PA’s quest to deal with the situation of resistance [in the West Bank] is complicated for two reasons. The first is that it wants to prove its ability to manage public affairs, which requires it to implement practical steps and fulfill the signed agreements [with Israel], by controlling the street and keeping it under its will.”

The second reason, he noted, is that the PA cannot face the pressures of Israel and the United States, which demand guarantees that it can ensure security in the West Bank without granting it political sovereignty. “This is humiliating the PA before the local public opinion,” he said.

Bisharat pointed out that the PA’s attempt to prove its ability to manage the field situation is creating internal tensions and humiliating it, in addition to widening the chasm between the official institutions and the angry and resentful masses of the general political and economic situations.