Banks in Lebanon have been shut down for nearly a week amid fears of a bank run. 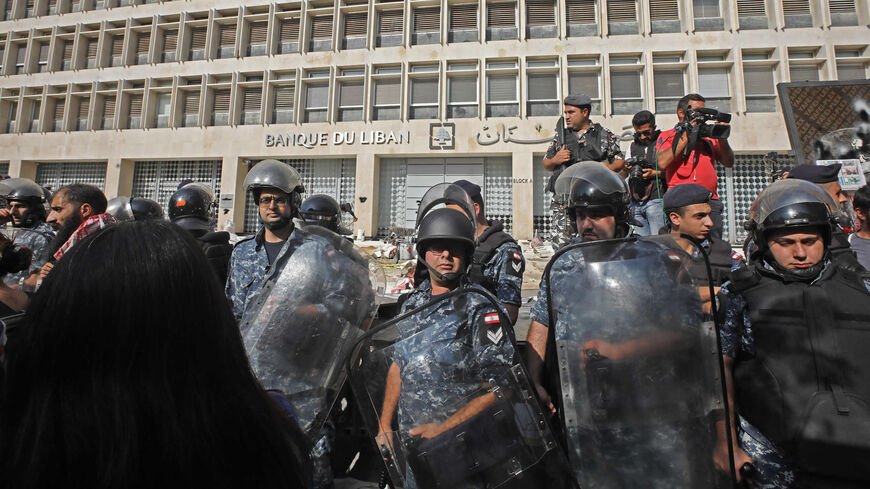 BEIRUT — The Association of Banks in Lebanon (ABL) announced Sept. 25 that banks across the country would reopen their doors Sept. 26 after they had been closed for five days following a spate of heists carried out by depositors to recover their frozen savings.

On Sept. 26, several banks opened their doors to clear some urgent banking operations, namely for commercial, educational and medical institutions, while transactions for ATMs have also resumed for all clients, according to a statement by the ABL.

As for individual depositors, the measures remain unclear as each bank is adopting its own steps. For instance, a bank in Beirut has reopened two of its branches to provide services for institutions only. Meanwhile, individuals can only reach this bank’s customer service by phone or make withdrawals and deposits through the ATM.

This situation has obstructed many issues for citizens who, for instance, have bank checks they need to cash.

On Sept. 21, ABL had announced in a statement that “banks will remain indefinitely closed amid an ambient climate of incitement to violence against banks, which threatens the safety of employees and customers, especially in the absence of any measures or even assurances from the state and all security authorities to secure a safe working environment for them.”

The decision came after several people broke into banks in various areas of the country, some armed, to force the employees to hand them over their savings that the banks have been withholding since a devastating economic crisis broke out in Lebanon in October 2019.

The five-day closure had further angered the people who found themselves unable to carry out any transactions.

Tarek, 40, who works in web design, told Al-Monitor, “It is very upsetting that banks closed; they are harming us and it  costs us money.”

He added, “I had to deposit money in my account because I have online payments to renew website subscriptions. Now I have to pay a $180 penalty,” because he was unable to wire the funds on time.

Nisreen Hamdan, a 26-year-old university student, told Al-Monitor, “I am waiting for the banks to open so that I can cash a cheque for $850 that I had gotten for a freelance project I did with an association. Also, I am unable to withdraw my money from the ATM because my card is suspended. I remain penniless until banks reopen.”

Nada Nehme, a woman in her 40s, told Al-Monitor, “What’s worse is that we cannot even inquire about our accounts. We don't know if we received a transfer or not. Customer service, even by phone, is unavailable.”

A bank employee who spoke on condition of anonymity told Al-Monitor about the issues her customers faced during closure of the banks. “Some merchants were unable to get the weekly withdrawals they are allowed so they can pay for their goods. One customer’s card was swallowed by the ATM, and she has been waiting for banks to reopen to get it back and withdraw her money. One customer could not close on a house abroad because he was unable to transfer the money on time.”

Tarek Helou, a young man in his 20s who works in a Beirut cafe, told Al-Monitor, “I was not really affected by the closure because I have stopped depositing my money in banks since 2019. I have zero trust in banks now. Even my workplace now pays us in cash instead of by bank transfer, so I don't really care whether they reopen or not.”

Rafiq Gharzi, a lawyer from the Depositors Union, a nongovernmental association that supports depositors, founded in 2019, told Al-Monitor, “It is clear that the banks are looking for an excuse to control people more because there is no legal or moral justification for the banks to actually shut their doors.”

He said, “It is as if the banks were telling people and depositors, ‘Either you stop demanding your rights and submit to our conditions and policies and accept that we stole your money, or we will close all branches and paralyze the entire country.’”

Gharzi noted, “Closing the banks will not protect them from people's anger. If they want people to stop demanding their rights, they have only one solution — to give people access to their savings and adopt a fair, comprehensive and logical solution.”

Patrick Mardini, economist and head of the Lebanese Institute for Market Studies, told Al-Monitor, “The banks’ problem is that they have deposits of over $100 billion and their assets do not exceed $20 billion, so they can barely pay 20% of the depositors' money.”

He added, “That's why banks have resorted, since the start of the crisis in 2019, to forcing depositors to withdraw their money [even those deposited in US dollars] in Lebanese pounds. Today, some depositors want their money in US dollars and are no longer satisfied with withdrawing their savings in Lebanese pounds at an unfair exchange rate. People can clearly see that banks do not have a clear plan, and the Lebanese judiciary is not doing them justice, so they took matters into their own hands. I believe the political authority is the one to blame here because it did not find a proper solution, nor did the judiciary do anything to help depositors.”

An employee at the Credit Libanais Bank told Al-Monitor on condition of anonymity, “When banks were closed, we went to our branch and put money in the ATM and carried out some necessary transfers.”

He added, “Of course I am concerned since some people were saying that without bloodshed depositors cannot get their savings from banks, but from the bottom of my heart I feel for these people and indeed, some banks are benefitting from this closure.”

In a Sept. 21 statement to the local An-Nahar newspaper, Interior Minister Bassam Mawlawi said that he does not support the closure of banks because this will deepen the crisis and increase pressure on citizens, calling on banks to reopen and strengthen their security.

The Association of Depositors in Lebanon, an association specialized in defending the rights of depositors, tweeted Sept. 16, “The war to recover deposits has begun, and we will not remain silent until our rights are fully restored.”

Since October 2019, banks have imposed strict restrictions on depositors' withdrawals, especially in US dollars, and did not give the Lebanese people the freedom to dispose of their money. And for a long time, they only allowed them to withdraw their money in Lebanese pounds, whose value had greatly depreciated against the dollar, which caused frequent problems between depositors and bank employees.

On Sept. 14, Sally Hafez stormed the Sodeco branch of BLOM Bank to recover her savings to pay for her sister’s cancer treatment. Hafez held up the bank using what later turned out to be a toy gun and managed to recover part of her savings.

In light of this wave of hold-ups, many fear that banks could resort to closing or imposing new measures on depositors, which will negatively affect people and their ability to run their businesses and pay for their rising living costs.