Israel, US at odds over rules of engagement

The Israeli leadership has shut down a US demand to review its policies on soldiers opening fire. 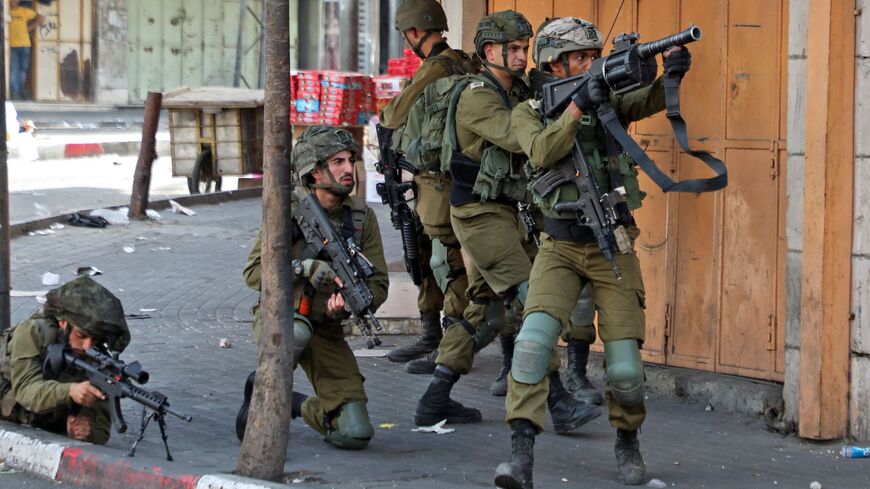 Israeli soldiers take aim during clashes with Palestinian protesters following a demonstration to denounce the annual nationalist "flag march" through Jerusalem, in the city of Hebron in the occupied West Bank on May 29, 2022. - MOSAB SHAWER/AFP via Getty Images

The Israeli leadership reacted harshly Sept. 7 to American calls for Israel to reexamine its military’s rules of engagement. The American call came on the backdrop of an internal IDF report that said it was likely American-Palestinian journalist Shireen Abu Akleh was shot dead by an Israeli soldier by mistake. According to army sources cited in the Israeli press, it was “highly probable” an Israeli soldier under fire erroneously targeted Abu Akleh, mistaking her for a Palestinian militant. No criminal investigation into any soldier is expected.

Expressing sorrow over her death and describing it as a “tragedy that occurred amid heavy enemy fire,” Prime Minister Yair Lapid clarified that Israel is not reassessing its rules of engagement.

He said, “The IDF never intentionally shoots at innocent people. We are deeply committed to freedom of the press and to some of the most stringent rules of engagement in the world. But to be clear, I will not allow an IDF soldier who was protecting himself from terrorist fire to be prosecuted just to receive applause from abroad. No one will dictate our rules of engagement to us when we are the ones fighting for our lives. Our soldiers have the full backing of the government of Israel and the people of Israel.”

Earlier in the day, Defense Minister Benny Gantz said that only IDF chief of staff can determine the rules of engagement. He noted, “The chief of staff, and he alone, determines and will continue to determine the open-fire policies, in accordance with the operational need and the values ​​of the IDF, including the purity of arms. The commanders and soldiers strictly implement the rules. There was and will be no political involvement in the matter.”

Lapid, Gantz and Bennett's comments came following reports that the United States was looking into the issue of IDF engagement rules in connection to Abu Akleh’s death and in general.

On Sept. 6, Israeli news outlets reported that the State Department was assessing the ultra-Orthodox Netzah Yehuda infantry battalion following suspicions of inappropriate behavior by the soldiers toward West Bank Palestinians. Last August, four soldiers in the battalion were filmed beating a detained Palestinian. The US Embassy in Israel was reportedly asked to prepare a file on the battalion, including interviews with Israelis and Palestinians.

Also on Sept. 6, responding to a question about the circumstances of Abu Akleh’s death, State Department deputy spokesperson Vedant Patel said, “We continue to underscore the importance of accountability in this case, and we’re going to continue to press our Israeli partners to closely review its policies and practices on rules of engagement and consider additional steps to mitigate the risk of civilian harm, protect journalists and prevent similar tragedies in the future. Ultimately, that is a key goal for us, as the statement from [State Department Spokesman] Ned Price yesterday, is to underscore that similar actions and similar occurrences don’t happen in the future. And that’s what we continue to reiterate with our Israeli partners.”