Iran has vowed to respond to any “hostile actions” after an Iranian drone was reportedly shot down en route to Erbil. 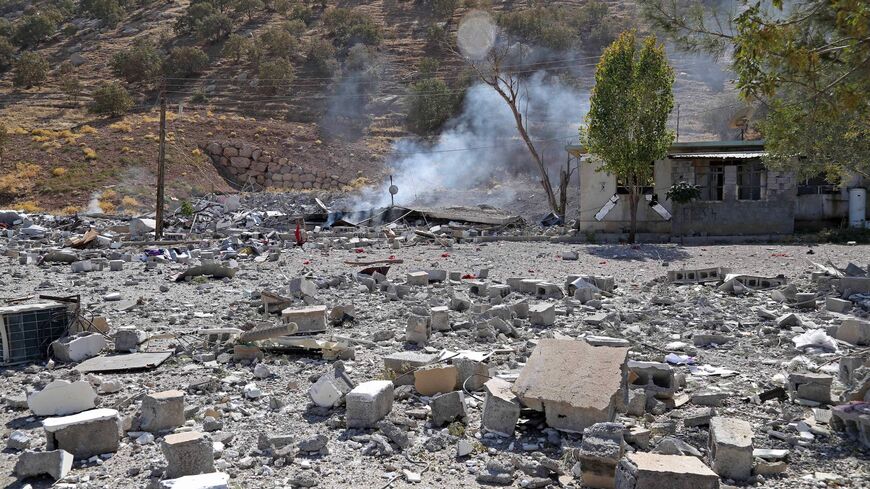 A partial view shows the aftermath of Iranian cross-border attacks in the area of Zargwez, near the Iraqi city of Sulaimaniyah, on Sept. 28, 2022. - AFP via Getty Images

The threats followed Wednesday’s shooting down of an Iranian drone that was reportedly heading toward the capital of the Kurdistan Region of Iraq, Erbil. Earlier this week, Iran unleashed a wave of missile and drone attacks against Iranian Kurdish opposition forces based inside the Kurdish region, killing at least 14 people, including a pregnant woman and a US citizen. It was among the deadliest spate of such attacks in recent years.

The attacks came amid mass protests across Iran triggered by the Sept. 16 death of 22-year-old Mahsa Amini. The Iranian Kurd perished after being severely beaten by Iran’s dreaded morality police. Iran’s clerical regime has sought to paint the tragedy as part of a foreign plot designed to destabilize the Islamic Republic, with the Kurds serving as willing pawns.

In a televised interview, Iran’s hard-line President Ebrahim Raisi said the United States was behind the unrest. “We should not allow the enemy to weaken our national unity,” he said.

The demonstrations are into their third week with no signs of abating as Iranian women continue to rip off their headscarves and protesters spray anti-government graffiti on walls across the capital, Tehran. Dozens of people, mostly protesters, have died in clashes with security forces and thousands have been arrested in a spiraling crackdown.

“If the Americans take action against Iranian drones, the armed forces of the Islamic Republic of Iran will respond to this hostile action, and we reserve the right to confront and take revenge,” Bagheri warned, adding, “If a hostile action against Iran [or] its national security interests takes place from American bases in neighboring countries, we will definitely respond to those bases.”

As of the time of publication of this article, the State Department had not responded to Al-Monitor's request for comment.

Many analysts contend that the hawkish rumbles emanating from Tehran are linked to the government's attempts to deflect attention from the protests, which have united Iranians across class, religious and ethnic divides for the first time.

“The Iranians are feeling the pressure and getting increasingly desperate to distract attention away from home by finding and blaming external enemies,” explained Dlawer Ala’Aldeen, who runs the Middle East Research Institute, an Erbil-based think tank.

Asso Hassan Zadeh, a Kurdish Iranian analyst and member of the Kurdistan Democratic Party of Iran, which suffered the brunt of the attacks, said Iranian drones continued to hover over the party’s compound in Khoya, some 65 kilometers (40 miles) east of Erbil.

By attacking the Kurdish opposition in Iraqi Kurdistan, Tehran hopes to frame the protests as foreign-inspired Kurdish unrest. “As such, their ongoing threats are primarily directed at the KRG and the Iranian Kurdish opposition, both being defenseless targets. They know that the US administration’s threshold for engagement is very high. The US has no appetite for military escalations, let alone a war, even after the death of a US citizen in the strikes,” Ala’Aldeen told Al-Monitor.

A senior KRG official speaking to Al-Monitor not for attribution observed, however, that as confected as it sounds, Iran “basically believes its own rhetoric.”

The official described a meeting between a KRG leader and Iran’s former Foreign Minister Mohammad Javad Zarif on the sidelines of a recent security conference in Munich (when Zarif was still foreign minister) to illustrate his point. “Zarif told us he was ‘concerned’ about American bases in Iraqi Kurdistan,” the official recalled. Zarif said he had “info” that the Americans were airlifting members of the Mojahedin-e-Khalq from Albania to bases in Iraqi Kurdistan, “where they were being trained against Iran.”

The Mojahedin-e-Khalq, or MEK for short, is an armed Iranian resistance group that degenerated into a cult under its current leader, Maryam Rajavi, and that used to be on Saddam Hussein’s payroll to fight the Iranian regime. She and thousands of MEK members were relocated to Albania with the help of the Trump administration.

“It was quite difficult for [the KRG leader] to keep a straight face. But he told Zarif that there was ‘nothing secret’ about the base and that anyone could drive past it and easily see what was going on within,” the official said. The KRG leader assured Zarif that the base was used by coalition forces exclusively for operations against the Islamic State in Syria. The official declined to identify the base.

“Our initial instinct was to scoff. But in hindsight, it’s clear that a top Iranian diplomat would not come into a meeting making such claims unless he actually believed them,” the official said.

The Islamic Republic clearly feels under constant siege. The attacks on Kurdish Iranian opposition groups are nothing new and recently, Tehran has started targeting Iraqi Kurdish energy facilities to signal displeasure with KRG policies seen to conflict with its own interests.

Arzu Yilmaz, a visiting scholar at Hamburg University and the author of numerous studies on the Kurds, said the attacks on Iraq should be seen through the lens of regime consolidation on the part of Iran. At the same time, they reflect the regional power struggle between Iran and Turkey that is playing out in the Kurdish sphere, Yilmaz told Al-Monitor. Turkey supports the Iraqi Kurds and Iraq’s Sunnis against Iranian-backed Shiite groups amid continuing and thus far fruitless efforts to form a new government in Baghdad.

Abdullah Mohtadi is the leader of Komala, which was among the three Kurdish Iranian parties struck by Iranian forces this week. He believes Iran’s game plan is to draw the Kurds back into armed conflict. “We are trying to avoid this and to keep the mass political protests flourishing,'' Mohtadi told Al-Monitor. The main Kurdish Iranian opposition groups largely renounced violence in the early 1990s, saying they would henceforth pursue their demands for greater rights through peaceful means.

However, violence in Iran is poised to increase following calls from an alliance of Kurdish Iranian opposition parties for a second general strike tomorrow in the Kurdish-majority northwest. The first strike called on Sept. 19 was widely observed across the country and marked a dramatic escalation in the unrest. “Things risk getting hot tomorrow,” Hassan Zadeh warned.