As US awaits Iran deal response, new Vienna round unlikely

A European Union source said negotiators would only return to the Austrian capital to ink a final agreement. 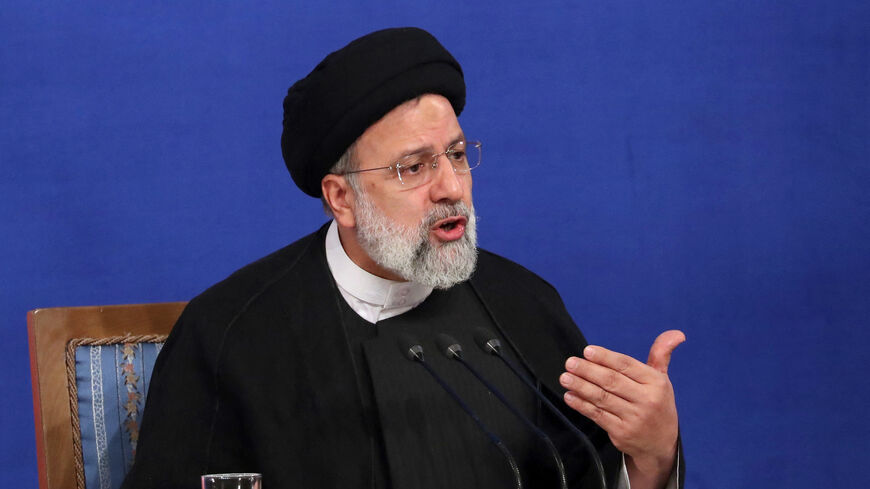 Iranian President Ebrahim Raisi sits near a portrait of Iran's Supreme Leader Ayatollah Ali Khamenei as he speaks during a press conference in Tehran on Aug. 29, 2022. Raisi today said reviving a 2015 deal with world powers is "meaningless" unless the UN nuclear watchdog puts an end to the probe on undeclared sites in the country. - STR/AFP via Getty Images

A deal is taking shape that would revive the landmark Iranian nuclear agreement, but US and Iranian negotiators are unlikely to return to Vienna to hash out their remaining differences, a European Union source told Al-Monitor.

Asked whether further talks could be held to bridge the gaps between the two sides, an EU source said “there will be no new round of any kind. Next time in Vienna will be a ministerial [meeting] to adopt the agreement — if there is an agreement.”

In recent weeks, the United States and Iran have indirectly exchanged views on what the EU described as a “final” proposal to revive the 2015 nuclear accord known as the Joint Comprehensive Plan of Action (JCPOA). EU foreign policy chief Josep Borrell has called both the US and Iranian responses “reasonable.”

Last Wednesday, Washington sent the EU, which is mediating the indirect talks, its response to Iran’s initial comments. Tehran says it’s now carefully studying the US feedback, with the semi-official Nournews reporting on Sunday that the Iranian review will take at least until the end of the week.

Biden administration officials say gaps remain but that prospects for a renewed deal have improved after Iran made some concessions, including dropping its demand for the Islamic Revolutionary Guard Corps’ removal from the US terrorism blacklist.

On Monday, State Department deputy spokesperson Vedant Patel declined to speculate on the expected timeframe for Iran’s response or the likelihood of another round of talks in the Austrian capital.

“I will let Iran and the EU speak to timelines, but as you know, we responded to the EU on Wednesday and now it's up to Iran to answer and then send their response to our texts back,” Patel told reporters in a phone briefing.

US officials have previously warned that time is running out to restore the deal. After former President Donald Trump withdrew from the JCPOA in 2018, Iran began steadily violating the accord, which set curbs on the purity and amount of Iran’s enriched uranium stockpile in exchange for international sanctions relief.

The UN nuclear watchdog assesses that Iran has further stepped up its underground uranium enrichment, according to Reuters. The news agency on Monday cited an International Atomic Energy Agency (IAEA) report to member states, which said Iran has begun enriching uranium with one of three cascades of advanced IR-6 centrifuges at its Natanz enrichment plant.

The IAEA has been at the center of one of the remaining hurdles to a resurrected deal. Iran has demanded that the agency shut down its yearslong investigation into uranium traces discovered at three of Iran’s old but undeclared nuclear sites. The latest European draft proposal to revive the 2015 agreement reportedly offered to close the investigation if Iran provides the IAEA with technically credible explanations for the nuclear material before the deal’s implementation day.

In a press conference in Tehran on Monday, Iranian President Ebrahim Raisi described the so-called safeguards issue as a pillar of the agreement.

"It is meaningless to talk about an agreement without the resolving of safeguard issues," Raisi told reporters.

Israel, meanwhile, has mounted a last-ditch diplomatic blitz to raise its concerns over the deal. A diplomatic source familiar with Israeli national security adviser Eyal Hulata’s meetings in Washington last week said that US officials pledged they would not pressure the IAEA to close its investigation prematurely.

Israel's Mossad director David Barnea will hold his own talks on the Iranian file in Washington this week. Israeli media also reports that Israeli Prime Minister Yair Lapid is seeking a phone call with President Joe Biden to discuss the nuclear deal.