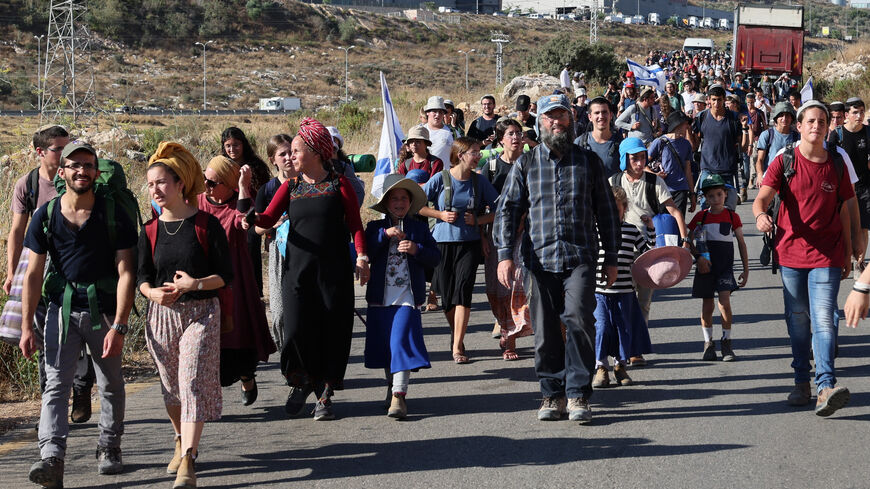 Israeli settlers gather as they try to establish a wildcat settlement outpost near the already established settlement of Barkan in the occupied West Bank on July 20, 2022. - JACK GUEZ/AFP via Getty Images

A group of 15 ultra-Orthodox families announced today they have established an illegal outpost in the southern West Bank within walking distance from the ultra-Orthodox settlement of Metzad. The group includes families with children and also yeshiva students.

The great majority of West Bank wildcat outposts were established in the past two decades by settlers and right-wing activists identifying themselves with the national religious stream, namely Orthodox Jews. The group that established the new outpost — named Derech Emunah — are ultra-Orthodox Jews. The group said they had set up some 15 wooden structures on the site, including homes for the families to live in, a makeshift synagogue and a makeshift yeshiva.

Settler leader Tzvi Succot, who intends to run for the pro-settler Religious-Zionist (Orthodox) party Knesset list primaries, told the press, "It is very exciting to see how members of the ultra-Orthodox community join with dedication to the holy mission of settling the land of Israel, breaking through the choking ring placed on the settlement enterprise in the West Bank. I hope the state of Israel won’t play a discrimination game and won’t demolish the new community, while all around it are hundreds of Arab-constructed illegal buildings that are not subjected to the law."

Israeli nongovernmental organization Peace Now called upon Defense Minister Benny Gantz to dismantle immediately the new West Bank outpost. "Security forces must demonstrate zero tolerance to the outpost criminals, whether they are ultra-Orthodox, Zionist ultra-Orthodox or just criminals. Defense Minister Benny Gantz is avoiding evacuating the Homesh outpost. We call on him to instruct today, to demolish the new outpost. Any minute that the outpost is still standing shows that all he (Gantz) cares about is pleasing [right-wing Justice Minister Gideon] Saar and [right-wing Knesset member] Matan Kahana. It shows that he tries pleasing the ultra-Orthodox parties at the expense of the State of Israel," Peace Now said.

Peace Now was referring to Israeli authorities refraining so far from demolishing Homesh outpost despite the Supreme Court order to do so. Last week, Israeli authorities acknowledged that the outpost should be demolished but asked that it be done when security agencies see fit. Homesh has been in the eye of a political storm in Israel ever since the killing last year of Yehuda Dimentman outside the outpost by a Palestinian assailant.

On Aug. 11, IDF troops and police officers demolished the Ramat Migron outpost, including the homes of three families and a makeshift yeshiva.