Israel demolishes one West Bank outpost, stalls on another

The Ramat Migron outpost was demolished this morning and now Israeli settlers and right-wing politicians are focusing on preserving the iconic Homesh settlement. 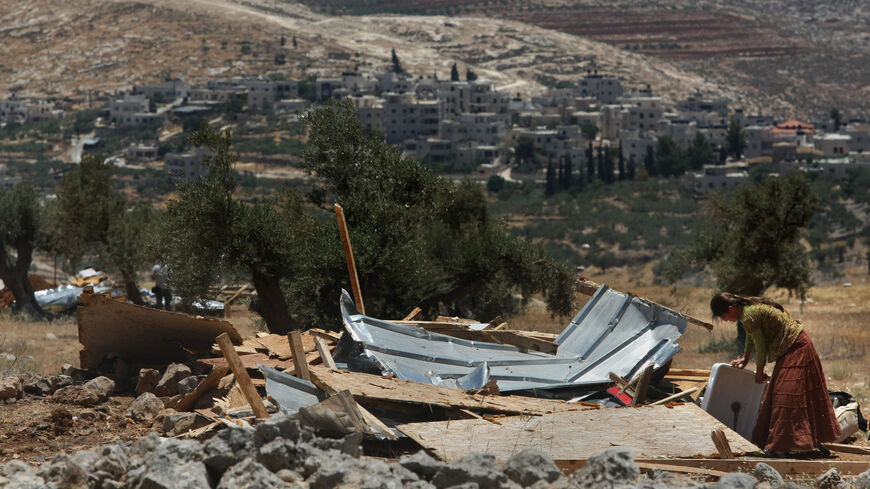 A Jewish settler salvages a sink after Israeli police completed the demolition of her outpost on June 3, 2009, in Ramat Migron, east of the West Bank city of Ramallah. - Uriel Sinai/Getty Images

IDF troops and police officers demolished the Ramat Migron outpost this morning in the West Bank. The security forces reportedly tore down four buildings, including the homes of three families and a makeshift yeshiva. Settlers in the place complained of policy brutality, but the police spokesperson rejected the claims, arguing that the evacuation was orderly and conducted according to the law.

Ramat Migron is not far from the relocated site of the original Migron outpost, 14 kilometers north of Jerusalem and near the Palestinian city of Ramallah. Both outposts have been the scenes of controversies and legal disputes. Settler residents have clashed several times with local Palestinians, with both sides blaming each other for violence. The first Migron was evacuated in 2012, under the Benjamin Netanyahu government, following a court ruling that it was built on private Palestinian land. Most of its occupants were offered relocation to a nearby hill. Still, a few houses still stand on the original site and are the topic of a legal dispute.

The evacuation of Ramat Migron comes on the backdrop on another ongoing controversy over the dismantlement of the Homesh West Bank outpost. Homesh, in the northern Samaria region, was first evacuated in 2005, in the framework of the Gaza withdrawal. Thus, by law, Israelis are forbidden from entering the premises. Still, over the years, right-wing activists have repeatedly tried to resettle the place, establishing a makeshift yeshiva on the hill.

The government came under pressure not to evacuate Homesh after the 2021 killing of Israeli settler Yehuda Dimentman by Palestinian assailants. Until then, the IDF had sent troops to evacuate the makeshift buildings every few months, but such efforts have halted since the killing.

In response to a petition by the nongovernmental organization Yesh Din last May, the state recognized that the settlement must be evacuated. Last June, the Supreme Court recognized the difficulties encountered by local Palestinian farmers in reaching their land and encouraged the Defense Ministry to address the issue. The court also demanded to be updated on progress toward the settlement's evacuation. On Aug. 10, government representatives informed the Supreme Court that Homesh would eventually be evacuated but that no date had been set. The government asked the court to let it proceed with the evacuation on its own schedule.

Reacting to the state’s response, Yesh Din said, “The state continues its foot-dragging and refuses to carry out its legal and moral obligation, which is to evacuate the outpost built illegally on private land belonging to the village of Burqa. The expulsion of Palestinians and the stealing of their land must end. Every day that passes increases the injustice and rewards lawbreakers. The defense minister and the prime minister, like their predecessors, prove that the rule of law will always take second place in the face of political interests and appeasing the settlers."

Yesh Din's statement went on, "The Supreme Court must bring them back into line by a clear judicial ruling that expresses its displeasure at this conduct, which is a complete infraction of the law and infringement of Palestinian rights.”

Interior Minister Ayelet Shaked, who heads the right-wing Zionist Spirit party, told the press today, "We oppose the defense minister's position that Homesh should be vacated, and we believe in the settlement enterprise throughout the country. This government did not vacate the [Homesh] yeshiva, while Netanyahu did."

Settlers from Homesh told the media yesterday they believe that the outpost would soon be regularized, rendering the Supreme Court's deliberations irrelevant. "Today it is already clear to everyone that we should never reward terror and that the Homesh settlement and presence there are a fait accompli," they said.

Several right-wing Knesset members reportedly asked Supreme Court President Esther Hayut to postpone any decision on Homesh until after the Nov. 1 elections, as the issue was highly politicized and subject to public debate.