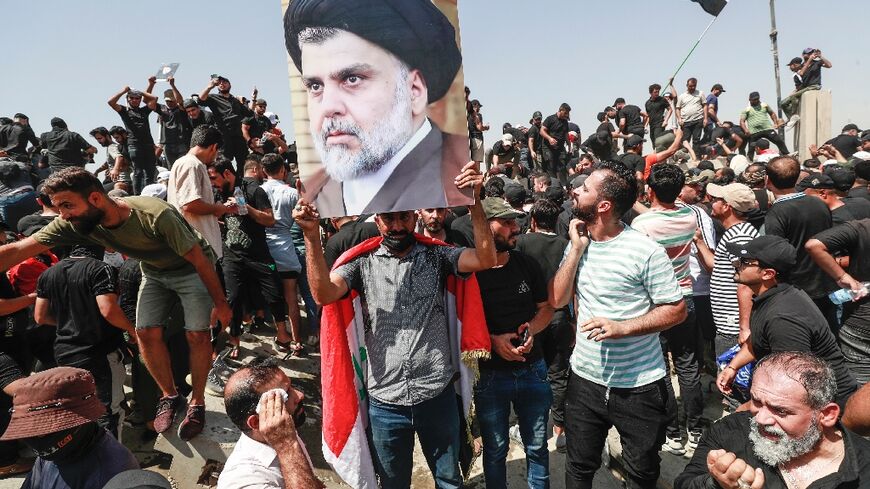 Supporters of Iraqi cleric Moqtada Sadr raise his portrait on a bridge in Baghdad before they occupied parliament on July 30, 2022 - Ahmad Al-Rubaye
by Guillaume Decamme
August 29, 2022 — Baghdad (AFP)

When he raises his index finger and frowns, Iraq holds its breath. The mercurial Shiite cleric Moqtada Sadr has yet again showed his strength in Iraqi politics, able to mobilise his loyalists with a tweet.

On Monday, in a short message, he announced his "definitive retirement" from politics and the closure of all institutions linked to his movement.

Shortly thereafter, thousands of his supporters mobilised, storming the government palace in Baghdad's fortified Green Zone and prompting the army to declare a curfew.

Today, as in past years following the 2003 US-led overthrow of dictator Saddam Hussein, Iraq cannot ignore the grey-bearded preacher.

Sadr, 48, who wears a black turban symbolic of a descendant of the Prophet Mohammed, once led a militia against American and Iraqi government forces.

Ten months after elections, the oil-rich but impoverished country is still without a new government.

Sadr's bloc emerged from the ballot as the biggest parliamentary faction, but intense negotiations since then have failed to bridge the divide between it and rival Shiite groups.

In June, his 73 lawmakers quit in a bid to break the logjam, but that led to his rivals, the pro-Iran Coordination Framework, becoming the largest bloc in parliament.

Sadr says he simply wants a new election. The Coordination Framework says it wants a government to be formed first -- and then for elections to be held, under conditions.

Analysts have said Sadr has used street protests to signal that his views must be taken into account in government formation. 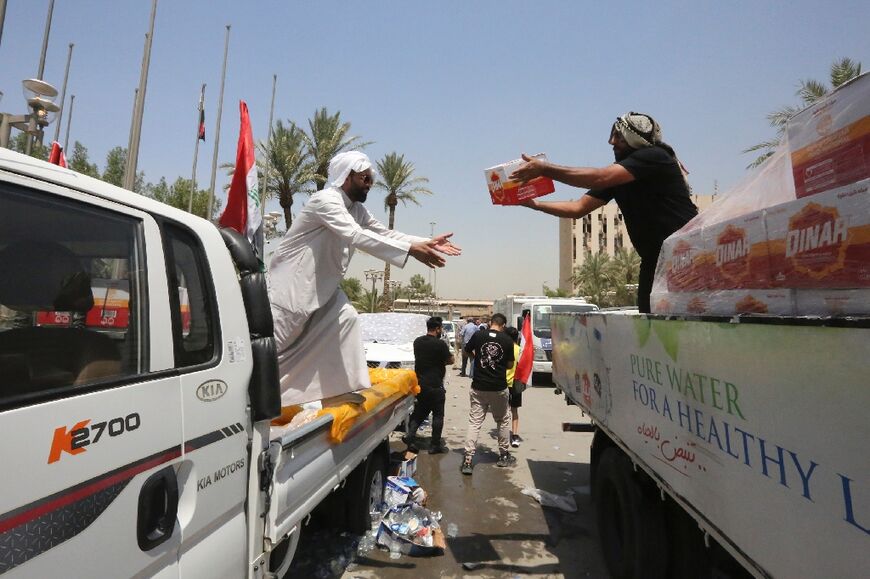 In late July, he backed via Twitter the takeover of parliament inside the fortified Green Zone that houses diplomatic and government buildings.

Sadr called it a "spontaneous revolution... a first step" towards "an extraordinary opportunity for a fundamental change".

But the chameleon-like figure has made several reversals over the years, including in 2008 when he suspended activities of his 60,000-member Mahdi Army, which had been one of Iraq's most active and feared Shiite militias.

He reactivated the group after a US drone strike in Baghdad killed Iranian General Qasem Soleimani in January 2020.

Sadr retains a devoted following of millions among the country's majority Shiite population, including in the poor Baghdad district of Sadr City.

"He can occupy the streets. No one in Iraq can do it as well as him," said Hamdi Malik, of the Washington Institute for Near East Policy. 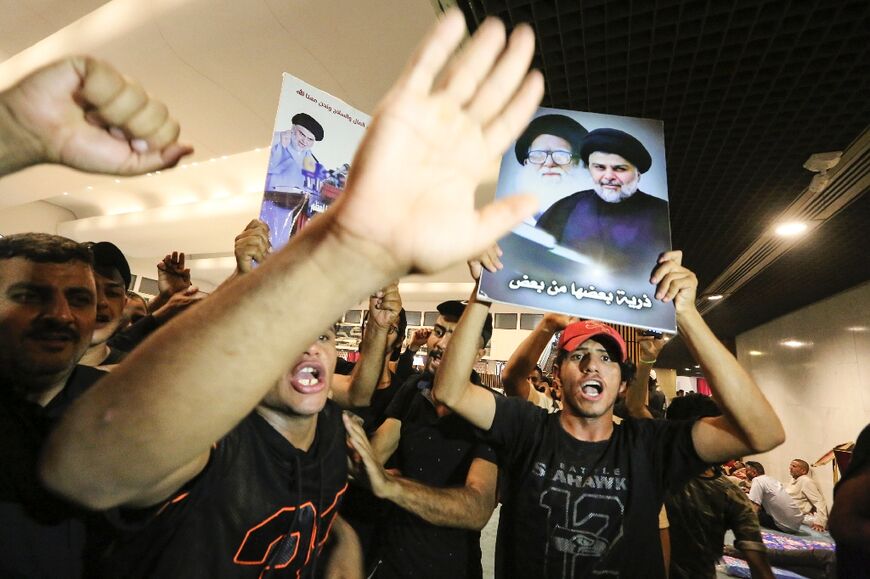 Perhaps uniquely in Iraq, Sadr has "a very obedient base" which also comprises a formidable online presence attacking his rivals in cyberspace, Malik said.

"Everything is revolving around him. That in Iraq is very important," he added.

During youth-led protests that erupted in 2019, Sadr sent thousands of followers to support the movement.

He then called them back, and later invited them to "relaunch the peaceful reformist revolution". 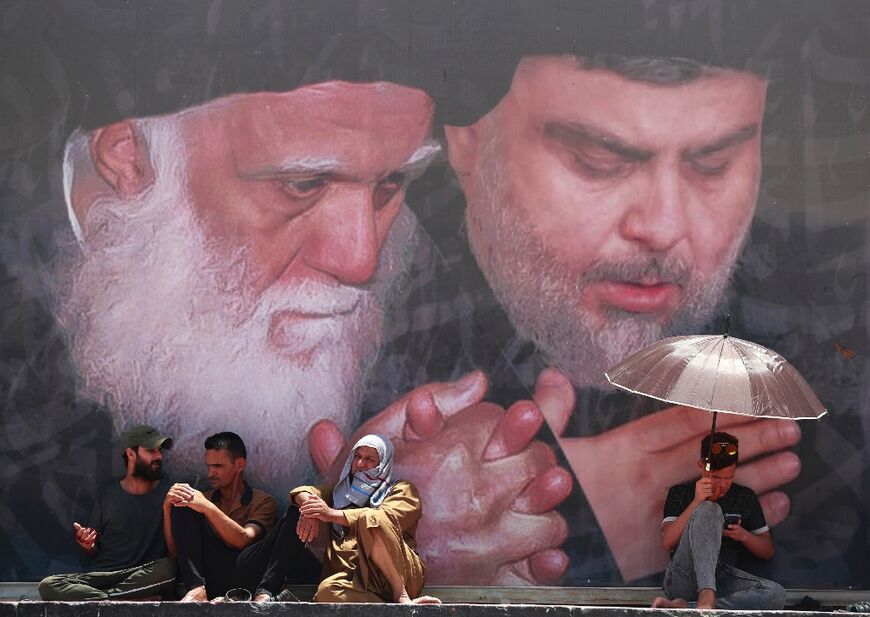 Ben Robin-D'Cruz, a specialist in Shiite movements at Aarhus University in Denmark, said Sadr "tries to position himself simultaneously in the centre of the political system while distancing himself from it".

His religious character, the researcher said, "allows him to create this illusion of transcending politics".

Born in 1974 in Kufa, near the holy Shiite city of Najaf, Sadr is described by some who are close to him as easily angered.

The round-faced Islamic leader comes from an influential clerical family and is the son of Mohammed Sadek Sadr, whom Saddam had assassinated in 1999.

Sadr initially said he would not take part in the October election but then backtracked to campaign on vague themes of reconstruction, opposition to Iranian influence, and a pledge to "end corruption".

He has a checkered relationship with Iran.

Sadr's bloc contested the 2010 legislative election in an alliance with the Supreme Iraqi Islamic Council, a Shiite group with links to the Islamic republic.

In October, though, Sadr campaigned as a nationalist.

The current standoff pits him against the pro-Iran Coordination Framework which includes lawmakers from the party of Sadr's longtime foe, ex-prime minister Nuri al-Maliki. Sadr supported Maliki's bid for the premiership in 2006, but his followers later pulled out of the former premier's cabinet. 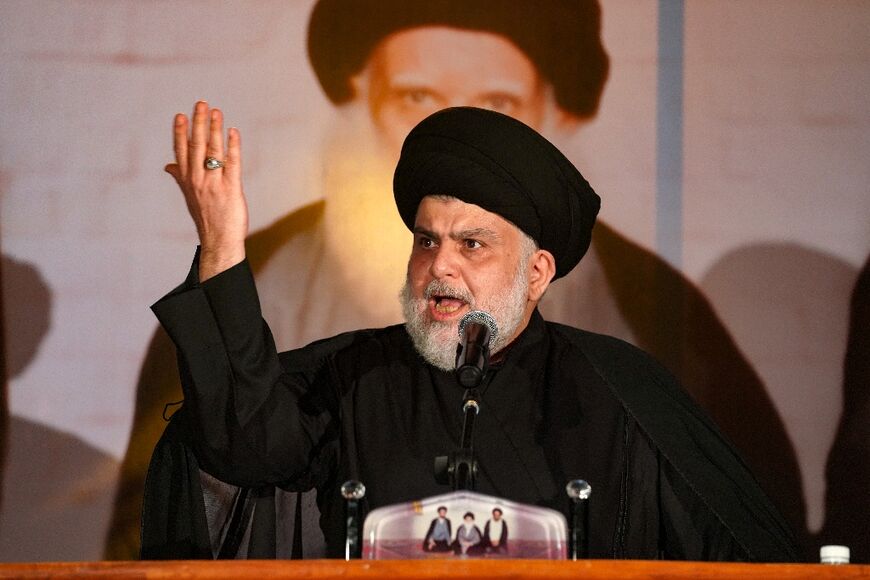 As a result of past deals, the Sadrists also have representatives at the highest levels of government ministries and have been accused by their opponents of being as corrupt as other political forces.

Supporters of Sadr, however, are ready to follow him almost blindly and view him as a champion of the anti-corruption fight.