Iraq's judiciary said Sunday it lacks the authority to dissolve parliament as demanded by populist Shiite Muslim cleric Moqtada Sadr, who is engaged in an escalating standoff with political rivals.

Followers of Sadr, in defiance of his Shiite rivals of the pro-Iran Coordination Framework, have been staging a sit-in protest at Iraq's parliament.

In the latest twist to the political turmoil, the firebrand cleric has urged the judiciary to dissolve parliament by the end of this week to pave the way for new legislative elections.

But the judiciary replied that "the Supreme Judicial Council has no jurisdiction to dissolve parliament", citing "the principle of a separation of powers".

Under the constitution, parliament can only be dissolved by an absolute majority vote in the house, following a request by one-third of deputies or by the prime minister with the approval of the president.

Nearly 10 months on from the last elections, Iraq still has no government, new prime minister or new president, due to disagreement between factions over forming a coalition.

In the latest turmoil to strike the oil-rich but war-scarred nation, Sadr has called for "early democratic elections after a dissolution of parliament".

Although it did not endorse the dissolution of parliament, the Supreme Judicial Council said it agreed with Sadr's criticism of the system's "failure to elect a president of the republic, a prime minister and the absence of a government formed within the constitutional timeframe".

"This is an unacceptable situation that must be remedied," it said.

The Coordination Framework opponents of Sadr launched their own Baghdad sit-in on Friday, nearly two weeks after the cleric's supporters stormed parliament and began an open-ended protest, first inside, then outside the legislature.

The opposing encampments are the latest turn in a standoff which has so far remained peaceful. 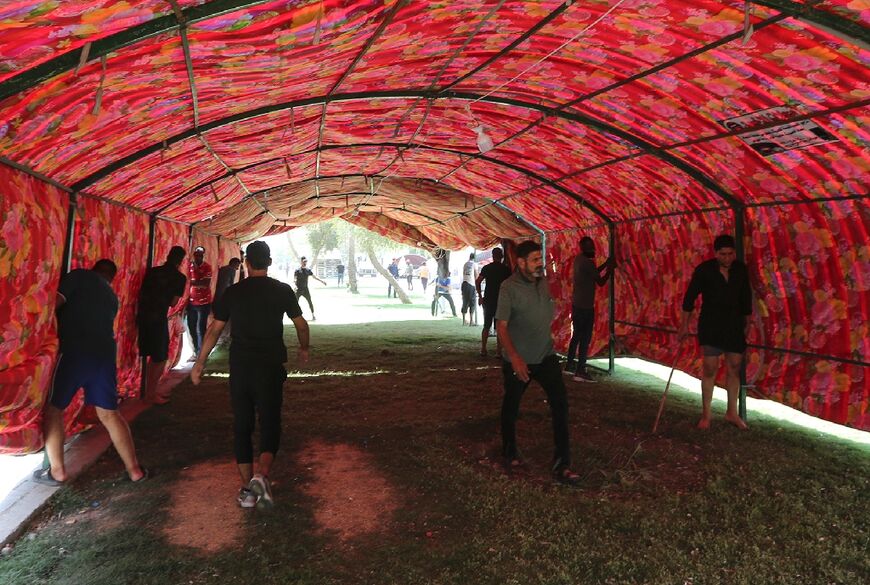 On Twitter, a close associate of Sadr, Saleh Mohamed al-Iraqi, said it was time to show "which of the two sides has the most support" among the Iraqi people.

He called on Sadr's supporters across the country to rally in Baghdad for a "million-man demonstration".

The demonstration would take place at 5:00 pm (1400 GMT) on Saturday, he said, calling for it to be "unprecedented in terms of numbers".

Sadr's camp launched the sit-in two weeks ago after the Coordination Framework nominated a candidate they saw as unacceptable for prime minister.

The cleric's bloc emerged from the October elections as parliament's biggest, but still far short of a majority.

In June, 73 of his lawmakers quit in an aborted bid to break the months-long political logjam.