Palestinian mother Rasha Qadoom mourns her five year-old daughter Alaa, who was killed in an Israeli bombardment of Gaza, as she looks after her surviving child Rayed, who was wounded - Mahmud HAMS
by Claire GOUNON
August 9, 2022 — Gaza City (Palestinian Territories) (AFP)

Palestinian mother Rasha Qadoom clutches tight the tiny pink rucksack belonging to her five-year-old daughter Alaa -- which will never again be carried on her little back.

Alaa was the first of 16 children killed in three days of intense conflict between Israel and Islamic Jihad militants in the densely populated Palestinian enclave of Gaza.

"It was a Friday like any other," said Qadoom, 27, remembering how Alaa had been dressed in a pink T-shirt to match her pink bag with a pink ribbon tied in her hair.

"She was happy, she wanted to go to the park with her aunt."

But as she went to her aunt on Friday afternoon, Israel launched an intense "pre-emptive" bombardment of militant positions. 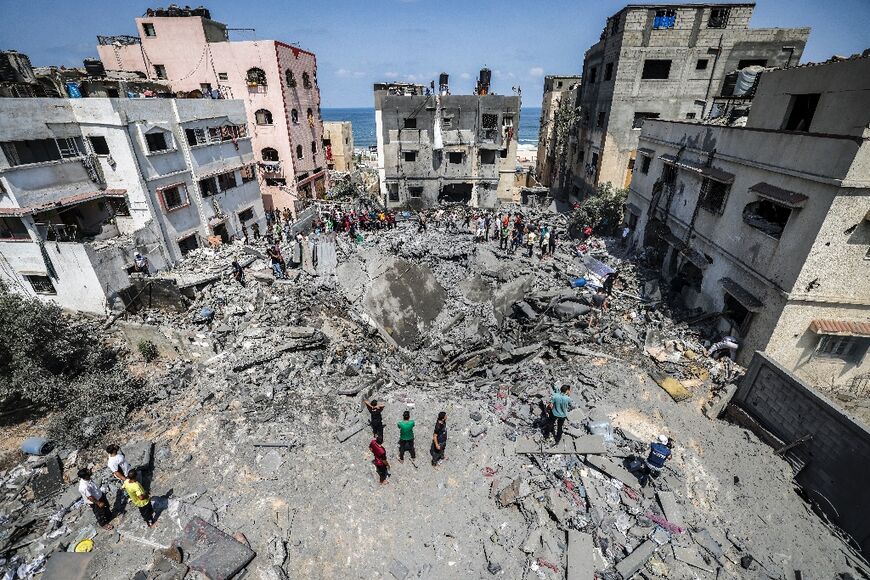 Alaa was knocking on the door of her aunt's home when a missile smashed down from the sky.

Later that day -- hours after Alaa was killed -- militants began firing barrages of rockets in retaliation. The violence raged until a tenuous truce came into force late Sunday.

Contacted by AFP, the Israeli army said it "only strikes military targets" and that Alaa's father Abdullah, who was wounded in the strike, was a high-ranking member of Islamic Jihad.

"Unfortunately, according to reports received following this strike, his daughter who was in his presence during the strike was hurt," the army said in a statement.

In her hands, Qadoom holds the blood-stained rags of Alaa's T-shirt, unable to comprehend why her daughter died.

"Nobody was armed in the neighbourhood. Instead of going to play in the park, she came back to me with clothes full of blood," she said.

"What was the point of this war?" she asked. "We lost children... all her dreams were in a school bag and a notebook."

The health ministry in the Palestinian territory run by the Islamist group Hamas said 46 people were killed, including 16 children.

After the strike in which Alaa was killed, the Israeli army said it was targeting members of Islamic Jihad operating in the area. 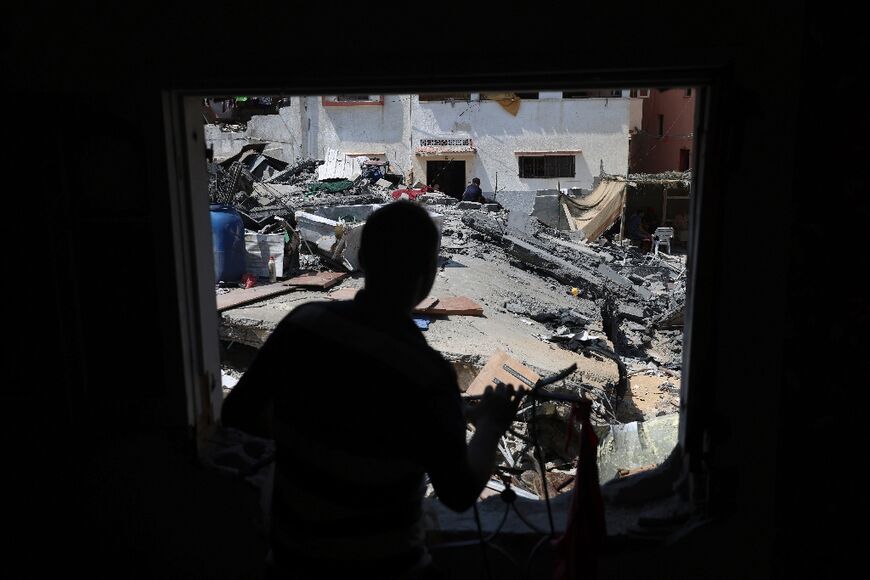 Israel also said that some of the civilian deaths recorded in the Palestinian toll were the result of militant rockets that fell short or misfired.

Elsewhere in Gaza City, a few blocks back from the Mediterranean Sea in a neighbourhood with houses crammed tight together, the home of the Shamalagh family was blown up.

Only a gaping hole remains.

Poking out of the slabs of smashed concrete are the remains of people's lives; a new fridge, a sofa crushed by tons of concrete, a stuffed toy animal.

Dozens of paper scraps from what was an English textbook lie in the dirt.

One page, a lesson focused on the British seaside town of St Ives, sets a task for schoolchildren in the blockaded enclave: "Think of your ideal location for a holiday."

The shattered building was once home to 17 people, including children, who were given just a 30-minute warning to leave by Israel before the devastating air strikes hit. 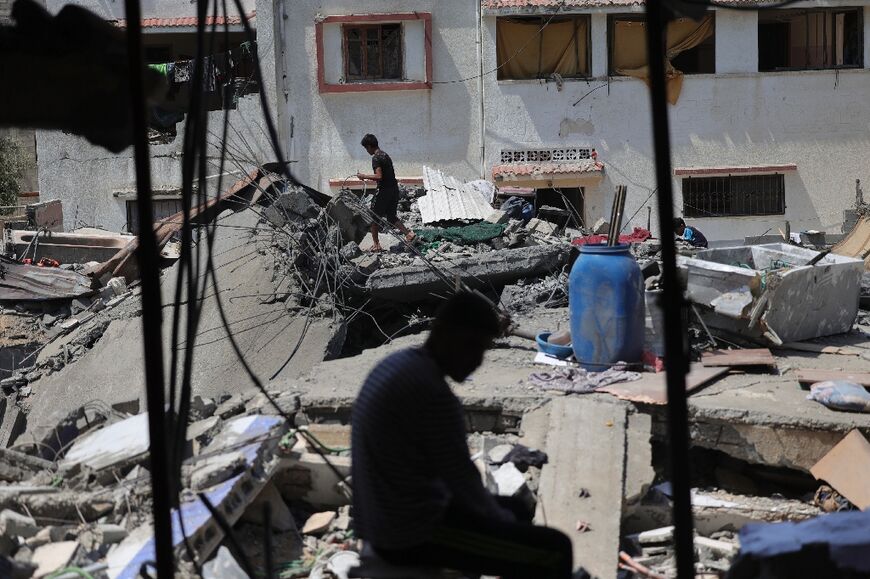 Sitting beside the ruins of her home, 70-year-old Nadia Shamalagh said that, even after the Egypt-brokered ceasefire began late Sunday, she struggled to rest.

"I couldn't sleep, I was staring at the ceiling and thinking 'they (Israel) are going to strike'," she said.

"Everyone was scared, the children couldn't stop crying."

Shamalagh says they had nothing to do with any of the Palestinian political or militant groups.

"They are not linked to Hamas, Fatah or Islamic Jihad," she said.

In Gaza, the cost of war on children is not only on those killed or wounded, but impacts all.

The conflict was the worst violence in Gaza since an 11-day war between Israel and Palestinian armed groups in May 2021, when 66 children died in Gaza, and two in Israel.

In June, Save the Children had already warned in a report of the impact on the young since conflict escalated with Israel in 2007 after the Islamist group Hamas took control in Gaza. 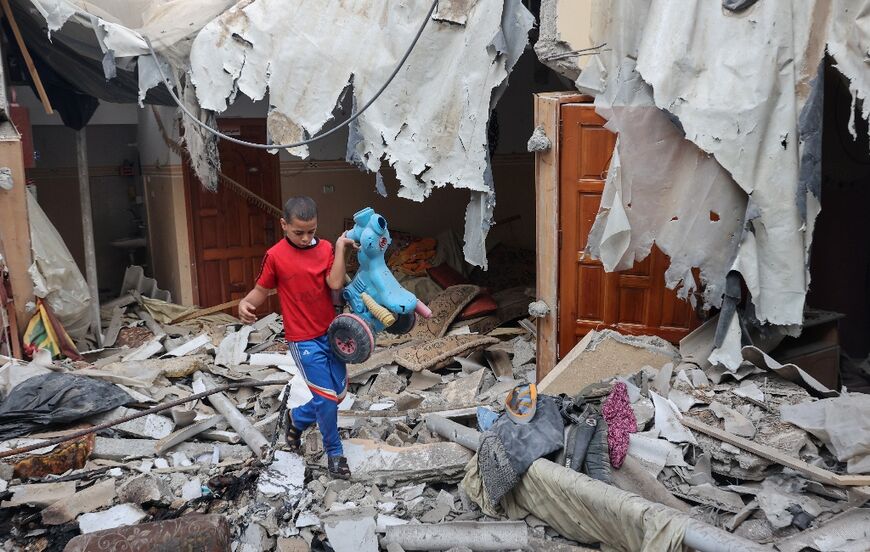 "During this time, their childhoods have been marred by five escalations in violence and a decade and a half of blockade," the aid agency said.

"They have repeatedly experienced or witnessed traumatic events and serious violations of their rights."

In her exhaustion, Shamalagh simply repeats a phrase, over and over.

"What is this life?" she said. "Are we going to continue to live this tragedy?"

Behind her, two girls have dragged a plank of wood out of the wreckage and placed it on a concrete block, sitting on either side and rocking on a makeshift seesaw.