Northern Syria is experiencing a heat wave, which is taking a heavy toll on camps for displaced persons who face chronic diseases, wildfires and water scarcity. 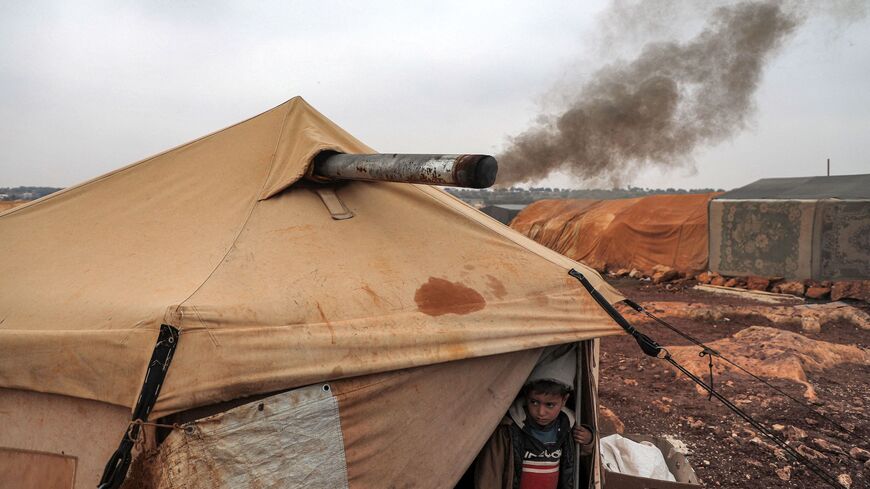 Smoke from an indoor bonfire exits from the chimney of the tent of Umm Raed at a camp for the displaced in Kafr Uruq in Syria's northwestern rebel-held province of Idlib on Dec. 16, 2021. - AAREF WATAD/AFP via Getty Images

The number of fires in camps for the displaced in northwestern Syria has risen to 126 since the beginning of the year after three new fires broke out on Aug. 24 due to high temperatures inside the tents and a reliance on indoor cooking stoves.

More than 590 displaced camps suffer from a lack of water. Also problematic is the decrease in water allocations in other camps due to a lack of official support and a high rate of daily consumption, according to the Syria Response Coordination Group, a nongovernmental organization operating in northwest Syria.

In a statement posted July 19 on its Facebook page, the group warned of the increase in fire incidents in the camps in northern Syria, which have become recurrent because of a heat wave, the widespread and incorrect use of nonrefined fuels, and the lack of awareness among children on how to use these products, causing fires to break out and resulting in civilian casualties.

The group added that one of the most prominent factors that increases the risk of tents catching fire is the reliance on cooking stoves inside, a habit developed by 90% of the displaced families. Also, the use of canvas tents is a cause of fires, especially since nearly 96% of camps lack the necessary insulation to prevent the outbreak of blazes.

In another Facebook post on June 13, the Syria Response Coordination Group called on humanitarian organizations operating in the area to establish firefighting points within the camps and to provide them with personnel to train them on how to deal with fires in such a way as to avoid casualties.

The group also appealed to those concerned to find suitable housing for the displaced — preferably near city centers and residential complexes — until appropriate conditions are available for the return of the displaced to their cities and villages.

Ahmad Daas, a displaced person in the Bahwartah camp near the Turkish border, told Al-Monitor, “Our tents are not equipped with any insulation against the sun’s heat. It is like we are sweltering inside because of the scorching heat. We do not have any fans.”

“[If we did have fans], we would need power panels and batteries to operate [them]. This is why I spend most of my time in the shade of olive trees. But despite the heatwave, the lack of water remains our main concern and exacerbates our suffering,” he added.

Daas explained that “the high temperatures make the tent vulnerable to catching fire. The poor equipment used inside tents, such as cooking utensils, makes things worse. Usually, fires break out as a result of faulty equipment and not from their misuse.”

“We also lack fire extinguishers, which delays our response to a fire, not to mention that most of the [camp’s] residents do not know how to use them. We also do not have any specialized teams to deal with these incidents,” he added.

Amin Qassem al-Alloush, the official in charge of the Khair al-Sham camp in the northern part of the Idlib province, told Al-Monitor, “About 446 families have been living in dilapidated tents that have not been replaced for more than two years due to bad weather conditions, which is one of the main reasons for the outbreak of fires.”

“The slightest spark could set the tents on fire, and it would be too late for the fire extinguishers. The lack of electricity pushes people to use old batteries, and short circuits have also been behind the outburst of flames inside the tents,” he added.

There are more than 1.8 million displaced persons living in 1,633 camps spread in the north of Syria near the Turkish border, according to August data from the Syria Response Coordination Group.

These people suffer from difficult humanitarian conditions, most notably an unhealthy environment, pollution, the spread of open sewage pits, deprivation of basic resources and income, and dependence on humanitarian aid. Children are dropping out of school, and families are in constant shortage of food and water, not to mention the absence of the most basic daily services.

Calls continue to be made to humanitarian organizations to alleviate the suffering of the displaced and provide protection as well as winter heating.

There is also a major deficit in humanitarian response, reaching 57.4% in the food security and livelihoods sector; 69.8% in the water and sanitation sector; 86.5% in the health and nutrition sector; 62.3% in the non-food resources sector; 58.2% in the shelter sector; 64% in the education sector; and 70.8% in the protection sector, according to the Syria Response Coordination Group data.

Ahmed Kattan, director of the camp response projects at the Bonyan Organization, a Gaziantep-based nongovernmental organization working to help war-torn communities in the Middle East, told Al-Monitor, “The fire outbreaks in the camps that caused many people to die, especially children, or caused permanent scars and disabilities, are not something new. But these cases started to be reported in 2019 when NGOs and camp management groups began working on setting forth a reporting mechanism, which sparked the attention of supporters, especially when the numbers of fires reached shocking numbers with devastating consequences.”

“In order to reduce fires, the Bonyan Organization implemented several projects, such as building separate kitchens for each tent, educating people on the need to cook in the allocated space and setting up firefighting points equipped with the necessary material in each camp. This is not to mention general training for camp residents on how to deal with fires and how to use fire extinguishers and special training for the teams responsible for firefighting points,” Kattan said.

He attributed the obstacles to the response of organizations to stave off the danger of many fires to the large financial cost. “The firefighting points in the camps are effective, but they need a team supported by a monthly financial allowance because volunteering operations often result in lack of commitment and failure,” he said.

Kattan also mentioned problems related to the lands on which the camps were established. “The landlords do not accept any construction work on their lands. This is why the organizations have recently sought to replace the tents with well-designed and well-planned housing [in other areas] to ensure dignity and protection for the displaced people,” he explained.