Several businesses in Lebanon have started utilizing co-working spaces, allowing them to cope with crises by sharing ideas and skills as well as offices. 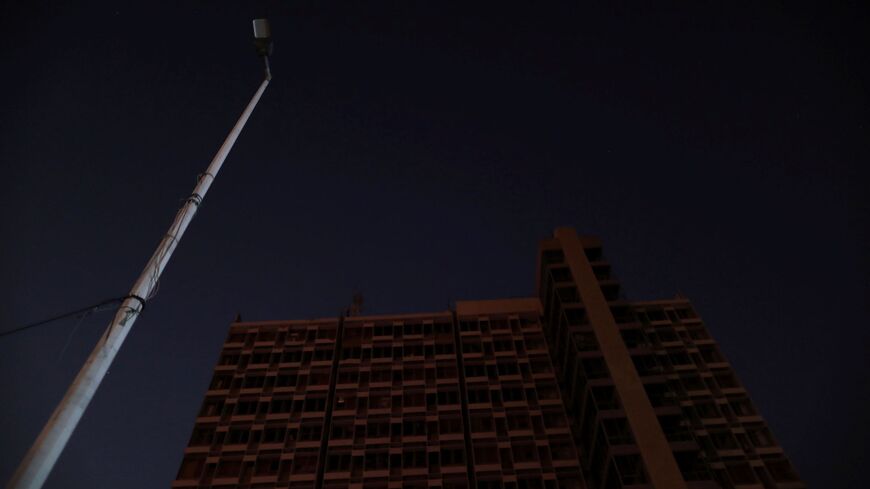 A turned-off lamppost near the headquarters building of Lebanon Electricity company (EDL) from outside on April 28, 2022 in Beirut, Lebanon. - Marwan Tahtah/Getty images

Beirut, Lebanon - Lebanese companies, freelancers, and professionals are trying co-working spaces to cope with the financial and practical obstacles of the economic crisis.

The ripple effects of the country's currency crash, banking crisis, and inability to import needed resources have led to rising rents, unaffordable and unreliable generators and expensive transport. Co-working spaces offer a solution.

“We are currently around 98% full and we have been so all year,” Kim Mouawad, senior community manager at Beirut Digital District, told Al-Monitor. According to Mouawad, the demand for co-working spaces has grown due to the need for reliable internet and electricity 24 hours a day.

The shared office spaces often include private desks, offices, conference rooms, break rooms, a mini café, and a kitchen and bathrooms. They are helping Lebanese companies and freelancers preserve jobs and generate income in fresh dollars through working and partnering with companies abroad.

Co-working spaces were present prior to Lebanon’s financial crisis, but companies would typically seek to rent private offices in buildings. However, acceptance is increasing recently as businesses seek novel approaches to survival.

Prices vary depending on the location, the service provided, the size of the company, and the length of the commitment. For instance, memberships to private desks range from $60 to $150 a month, and private offices range from $200 to $500 a month, in fresh dollars (dollars that were transferred directly from abroad and are currently unavailable in Lebanese bank accounts).

Ellie Msallem, manager of Park Innovation, a co-working space in Semqanieh, Mount Lebanon, told Al-Monitor that the digital economy is thriving in Lebanon as people receive payments in fresh dollars from foreign firms, and they’re preferring to work in co-working spaces.

“The goal is not just to enhance the working experience; it’s to enhance the entire experience," Mssallem said. “We have a graphic design company, software building company, web development company and digital HR company, so there is a diverse selection of companies that use the space.”

Mssallem has noticed a rise in demand for hot desks, which are desks that people utilize only when they want to. Companies and NGOs, in addition to requiring more offices, meeting rooms, and conference rooms, are seeking more private desks.

People from all sorts of backgrounds coexist in Baddawi, a co-working space in Tripoli. Manager Hussein Zeid said, “Tripoli really requires more workplace spaces due to its inadequate electricity and household facilities.” 70% of their clients are Lebanese, and 30% are Syrians and Palestinians, Zeid said.

According to Zeid, young people in Tripoli are using the studio to shoot visual content and collaborate with global companies, using their social media platforms for promotions. Also, he described how the co-working space has enabled a new project that helps local women who make handmade crafts to sell and market their products professionally.

Mokhtar Itani, community manager of the Olive Grove, a co-working space in the heart of Beirut, told Al-Monitor: “The demand for private offices is very high. We are fully booked and we have twenty waiting lists, but sustaining stable electricity is becoming a challenge.”

Ali Chocker, a computer engineer, told Al-Monitor, “Using a co-working space in Lebanon makes sense because my team and I work late to accommodate the work schedules of US companies we serve.” Also, he said, the arrangement reduces his anxiety and loneliness while granting him extensive networking possibilities.

Rania Hamedeh, founder of a local gourmet start-up company, told Al-Monitor that in addition to being convenient and cost-effective, co-working helped her find partners such as a graphic designer, a marketing expert, and a social media professional.