US: Iran aims to send drones to Russia for use in Ukraine 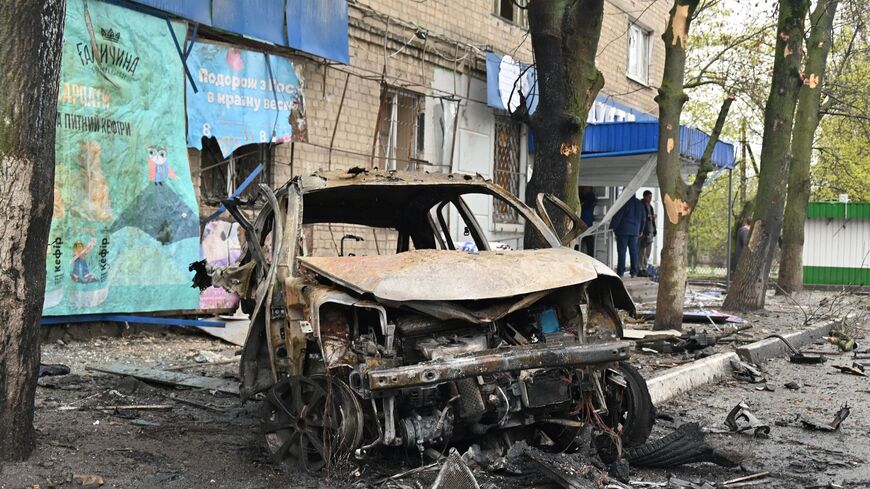 Debris from a destroyed car litter the street at the scene of an explosion near a grocery store, following bombardment at in Ukraine's second city Kharkiv on April 18, 2022. - SERGEY BOBOK/AFP via Getty Images

Iran is preparing to send armed drones to Russia for use in the Kremlin’s war against Ukraine, according to declassified US intelligence revealed by the White House on Monday.

“Our information indicates that the Iranian government is preparing to provide Russia with up to several hundred UAVs [drones], including weapons-capable UAVs, on an expedited timeline,” US National Security Advisor Jake Sullivan told reporters today.

Sullivan also said Iran’s government has planned to begin training Russian troops as soon as “early July” on how to deploy the weapons. It remains unclear whether Tehran has sent any drones to Russia yet, he noted.

Why it Matters: Sullivan's announcement comes days before US President Joe Biden's meetings with regional leaders in Israel and Saudi Arabia later this week, where Iran will be on high on the agenda.

US efforts to rally global support for Ukraine following Russia’s invasion drew lackluster responses from some of Washington’s Middle Eastern partners at the United Nations. The West’s failure to convince OPEC members to increase oil production to offset global prices has further pressured the US administration towards a politically awkward rapprochement with Saudi Arabia, the cartel's largest oil producer.

Biden and other US officials may push for greater unity on Ukraine during their visit to the Middle East this week, while offering support for joint air defense cooperation to better deter Iran’s increasingly sophisticated drone and missile attacks in the region.

Washington’s broad military and intelligence support for Ukraine has not gone unnoticed in Gulf capitals, according to former US officials briefed on the matter. From the earliest days of Russia’s assault, the White House’s national security council led a successful effort to help Kyiv maintain air superiority against Russia’s more advanced air force. American officials encouraged Ukrainian counterparts to move around their air defense systems and aircraft ahead of the invasion, two US officials told Al-Monitor at the time, as the US rushed mobile anti-aircraft systems into the country.

Meanwhile, Turkey’s provision of armed Bayraktar TB-2 drones has been credited with helping tip the balance of the conflict in Kyiv’s favor, enabling the Ukrainian Air Force to remain largely grounded and out of harm’s way during Moscow’s initial assault.

The United States has authorized some $7.3 billion worth in direct military aid to Ukraine, including 12 HIMARS mobile artillery systems and precision ammunition seen as key to US-backed efforts to target Russian command headquarters in the field. The Russians have failed to destroy a single HIMARS system belonging to Ukraine, a senior Pentagon official told reporters yesterday on the condition of anonymity, adding that Moscow’s forces have been making “very incremental, highly costly progress” in certain areas of the Donbass.

Iran’s alleged support for Russia’s war effort comes as the IRGC’s top political official on Monday ridiculed the proposed US-led air defense initiative across the Middle East, saying the plan – like other US-backed coalition in the region – was bound to fail.

What’s Next: Biden is expected in Israel on Wednesday, where he will survey the country’s emerging air defense technologies and discuss “security, prosperity, and [Israel’s] increasing integration into the greater region,” the White House announced last month. Israeli officials are expected to push for increased US funding for joint development of air defense systems.

Biden will later head to Jeddah, Saudi Arabia, for a meeting with leaders of the Gulf Cooperation Council, plus Jordan, Egypt and Iraq. He is also expected to meet with Saudi Crown Prince Mohammed bin Salman, the White House confirmed last week.

Know More: Give a listen to Al-Monitor’s latest podcast episode, featuring veteran US diplomat Martin Indyk’s take on what outcomes may be in store.