This week, Israel’s Supreme Court struck down the cap imposed by the Interior Ministry on the number of Ukrainian refugees allowed into the country. 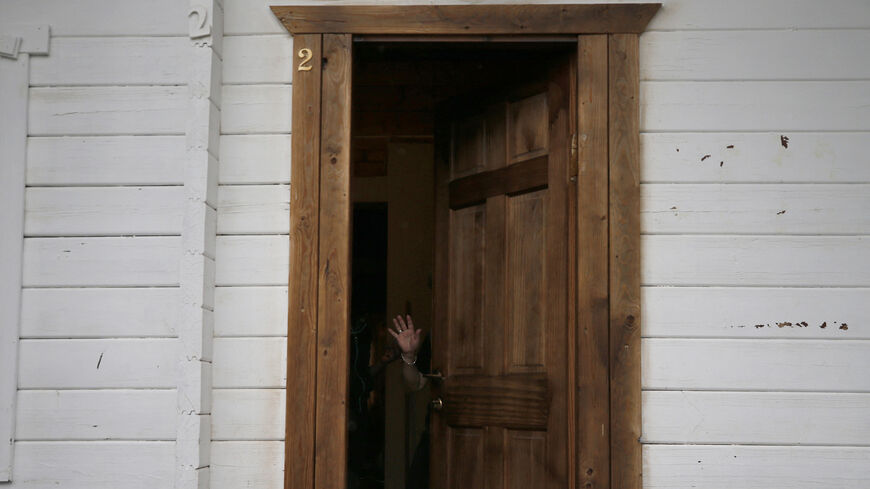 A woman waves from behind the door of a chalet of an Israeli holiday village turned into temporary residence for Ukrainian refugees who fled the Russian invasion of their country, in the northern Israeli Moshav of Goren, on March 23, 2022. - JALAA MAREY/AFP via Getty Images

Ukrainian President Volodymyr Zelenskyy welcomed Israel’s High Court ruling on July 3 rejecting a government cap on the number of Ukrainian refugees allowed to enter the country. The court ruled in favor of a petition against quotas introduced a few months ago by Interior Minister Ayelet Shaked, limiting the number of Ukrainians allowed to enter Israel.

“I commend the decision of the Supreme Court of the State of Israel, which obliges the government of Israel to abolish any additional restrictions on the entry of citizens of Ukraine. The rule of law and respect for human rights is exactly what distinguishes a true, developed democracy!” tweeted Zelenskyy.

Ukraine’s embassy in Israel tweeted in Hebrew, “We thank the Supreme Court for the encouraging decision regarding the entry of Ukrainian citizens. We maintain an efficient dialogue with Interior Minister Ayelet Shaked and expect the minister to help Ukrainian women and children, who have become extremely vulnerable in light of the brutal Russian attack. Our appreciation to lawyer Tomer Varsha, who initiated the petition with great dedication to the rule of law.”

Three years ago, Zelenskyy and then-Prime Minister Benjamin Netanyahu reached an understanding on entry for Ukrainian citizens. Speaking at a joint press conference with Netanyahu, Zelenskyy had said, “Recently, our countries have been actively cooperating in the field of migration. I am speaking of Israel’s numerous entry denials to Ukrainian citizens. We have agreed to finally resolve this issue.” The result was that Ukrainian nationals no longer needed a pre-requested visa for a visit of up to three months in Israel.

Shortly after the Russian invasion of Ukraine, Israel changed its policy. While several Israel political leaders said the country would embrace Ukrainian refugees, authorities espoused a different approach. Shaked capped the number of refugees allowed to shelter in Israel at 25,000, a number that included some 20,000 Ukrainians already in Israel on expired visas. In other words, Israel was willing to take in only 5,000 refugees from Ukraine and to regularize the status of 20,000 Ukrainians illegally residing in the country.

These numbers did not include Ukrainians of Jewish origin entitled to enter the country and become Israeli citizens under the law of return. According to reports last May, Since the beginning of the Russian invasion, more than 28,000 Ukrainians have entered Israel, including Jews. On May 23, following a Tel Aviv District Court ruling, the Interior Ministry announced it would automatically extend the tourist visas of Ukrainian citizens currently in Israel and allow them to work.

Relations between Kyiv and Jerusalem have been complicated ever since the Russian invasion. Zelenskyy, of Jewish heritage, clearly aspires to consider Israel one of his main allies. On the other hand, Zelenskyy had repeatedly expressed his disappointment over insufficient Israeli diplomatic and security assistance to Ukraine in its battles against Russia. Zelenskyy said as much in his Zoom address to the Knesset March 20 and again in his address to Jerusalem's Hebrew University June 24.

"I'll be honest with you, I love Israel very much and have visited it several times in the past, but I've avoided giving interviews to Israeli journalists because I don't always know how to answer their questions very well. I don't know how to answer their questions about Israel's help or what it could be doing. I'm grateful to the people of Israel. I am grateful for the sincere and emotional support to the people of Ukraine. … but we would like to also get support from your government," he said.

Zelenskyy added, "For example, Luxembourg, with a small population, has provided us with aid at the level of half of its military expenditure. … What about Israel? We understand it's a complicated issue for you, but we need your help to defend ourselves."

For the first two months of the war, Israel was very active on humanitarian assistance, being the first country to set up a field hospital in Ukraine, but avoided any military help, fearing the wrath of Moscow. It was not until April 20 that Israel changed its policy, authorizing the transfer of defensive gear. The office of Defense Minister Benny Gantz issued a statement  saying he had spoken on the phone with his Ukrainian counterpart Oleksiy Reznikov, informing him that "in light of the request of the Ukrainian Ministry of Defense," he had "approved the purchase of protective equipment of helmets and vests, which will be transferred to the Ukrainian rescue forces and civilian organizations."

On June 30, Israel’s Foreign Ministry confirmed that Vladimir Kozlovsky — who is both an Israeli and a Ukrainian national — had been taken captive by pro-Russian forces in the Moscow-controlled Luhansk region while fighting with Ukrainian forces. A video of Kozlovsky in captivity showed him identifying himself as Israeli. The ministry offered no further details on the issue.

Israel’s leadership sides with Ukraine, the United States and Europe against Russia over the invasion. Prime Minister Naftali Bennett addressed the issue on few occasions, preferring to discuss Israel’s humanitarian assistance and not to condemn Russia outright. It was then-foreign minister and current Prime Minister Yair Lapid who publicly condemned the invasion. Still, Israeli diplomats with whom Al-Monitor spoke recently said that Jerusalem’s position against the invasion is clear, a position they express in their contacts with European Union and NATO colleagues.