The latest fire came during a record-breaking heat wave in Europe. 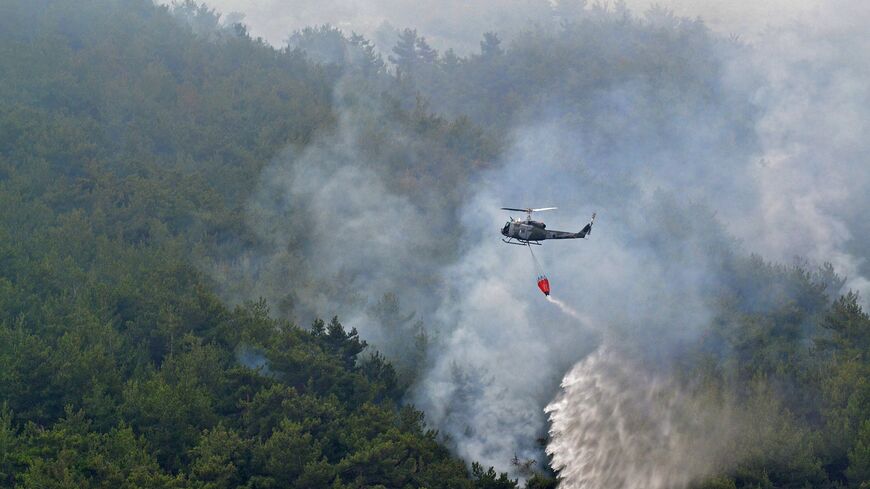 A firefighting helicopter drops water on the Batramaz forest fire in Lebanon's northern district of Minie-Danniye, on June 8, 2022. - FATHI AL-MASRI/AFP via Getty Images

The blaze broke out in forested areas in the town of Qabaait in northern Lebanon’s Akkar governorate. The fire reached close to people’s homes and damaged pine trees and olive groves in the area. The fire had been thought extinguished last night but then returned today, the official National News Agency reported.

Accuweather showed a high of 32 degrees Celsius (90 Fahrenheit) in nearby Tripoli today. However, the ultraviolet index was 11, the highest level possible.

The local government of nearby Fnaidek warned residents today to not start fires for any reason, MTV Lebanon reported.

Why it matters: The fires coincided with a record-breaking heat wave in parts of Europe this week. Yesterday, temperatures reached  40.3 C (104.5 F) in the United Kingdom — an all-time high.

Fires are common during the hot Lebanese summer. There was also a massive wild fire in a pine forest in the Dinniyeh region of northern Lebanon last month. Last year, there were large forest fires in Lebanon as well as Syria and Turkey — some of them deadly.

Extreme weather in the Middle East has prompted concerns about climate change’s effects on the region’s residents, particularly displaced people. Displaced Syrians living in tents in the northwest contend with extreme heat throughout much of the year.

Know more: Lebanon has also been struggling with water shortages since the economic crisis began in 2019. Yesterday, the United Nations released a report on Lebanon’s water infrastructure, which it described as “on the brink.” Many Lebanese rely on private water delivery due to insufficient public water. The water trucks now charge around $96 for 1,000 liters. This figure is six times higher than it was in 2019, per the UN.