While the document lays out a platform for continued US-Israeli cooperation, there are still signs the two are divided on diplomacy with Tehran. 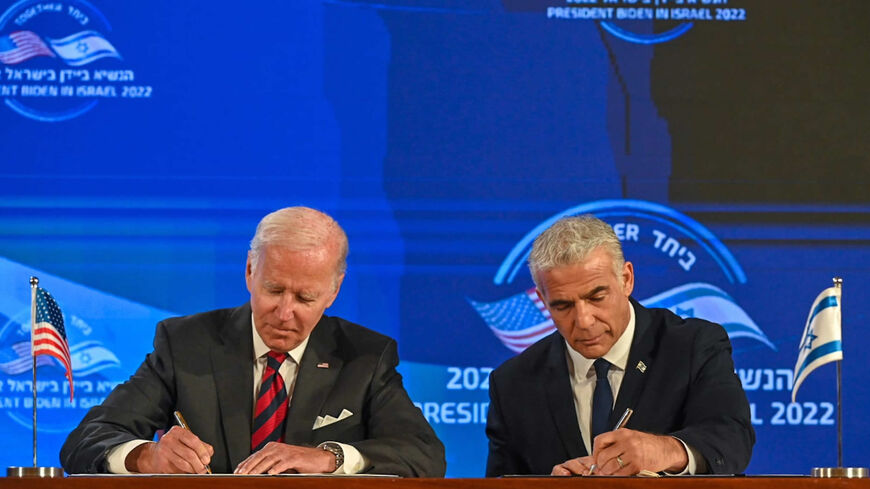 The press conference that followed the signing of a joint declaration on US-Israeli strategic cooperation by President Joe Biden and Israeli Prime Minister Yair Lapid Thursday exposed the divide between the two leaders on the Iranian nuclear file.

Hailed by Israeli diplomats as historic, the statement — known as the Jerusalem Declaration — reaffirms the unshakable bonds between both countries, "and the enduring commitment of the United States to Israel’s security. Our countries further reaffirm that the strategic US-Israel partnership is based on a bedrock of shared values, shared interests and true friendship. Furthermore, the United States and Israel affirm that among the values the countries share is an unwavering commitment to democracy, the rule of law and the calling of 'Tikkun Olam' [repairing the world]."

The declaration further underscores the American commitment never to allow Iran to acquire a nuclear weapon, and that it is "prepared to use all elements of its national power to ensure that outcome. The United States further affirms the commitment to work together with other partners to confront Iran’s aggression and destabilizing activities, whether advanced directly or through proxies and terrorist organizations such as Hezbollah, Hamas and Palestinian Islamic Jihad.”

Addressing the press after the signature ceremony, Lapid stressed the need to put Iran against the wall, forcing it to take a decision. “The only thing that will stop Iran is knowing that if they continue to develop their nuclear program the free world will use force. The only way to stop them is to put a credible military threat on the table,” he said, adding that such a threat should not be a bluff. “The Iranian regime must know that if they continue to deceive the world, they will pay a heavy price.”

Addressing the visit tomorrow evening of Biden to Jeddah, Lapid asked Biden to relay a message to the leaders of Saudi Arabia, Qatar, Kuwait, Oman and Iraq, saying, “Our hand is outstretched for peace. We are ready to share our technology and experience, ready for our people to meet and learn about one another, ready for our scientists to collaborate and our businesses to cooperate.”

Reportedly, in the one-on-one meeting between Lapid and Biden earlier today, the Israeli leader told his American counterpart that nuclear talks with Iran cannot continue to be open-ended and must have a deadline. Lapid also said the world powers signatories on the 2015 Joint Comprehensive Plan of Action must call the UN Security Council and snap back sanctions on Tehran for its nuclear violations.

In an apparent disagreement with Lapid on the need for heavy sanctions against Iran and preparing a military possibility, Biden said at the press conference, “I continue to believe that diplomacy is the best way.” Still, Biden noted that there is “an ironclad commitment from the United States of America to Israel’s security.”

Israeli analysts argue that no real progress was made during the visit to reduce the divide between Jerusalem and Washington on the Iranian nuclear file.

Biden, on the other hand, said already yesterday at Ben Gurion Airport that the two-state solution is the best way to solve the conflict between Israel and the Palestinians.

The Jerusalem Declaration also refers to the Palestinian issue, stating, “The United States and Israel commit to continuing to discuss the challenges and opportunities in Israeli-Palestinian relations. … President Biden reaffirms his longstanding and consistent support of a two-state solution and for advancing toward a reality in which Israelis and Palestinians alike can enjoy equal measures of security, freedom and prosperity. The United States stands ready to work with Israel, the Palestinian Authority, and regional stakeholders toward that goal. The leaders also affirm their shared commitment to initiatives that strengthen the Palestinian economy and improve the quality of life of Palestinians.”

In his remarks to the press, Biden said that the United States will “continue to work for a negotiated peace between Israel and the Palestinians.” He continued, “Israel must remain an independent, democratic Jewish state. The best way to achieve that remains a two-state solution for two peoples, both of whom have deep and ancient roots in this land.” Anything that takes the sides further from that is “detrimental to the long-term security of Israel,” argued the American president.

With the political part of the visit ending, Biden now continues to the residence of President Isaac Herzog, for a formal reception. Later this evening, he will participate at the opening ceremony of the Maccabiah Games, uniting Jewish athletes from around the world.