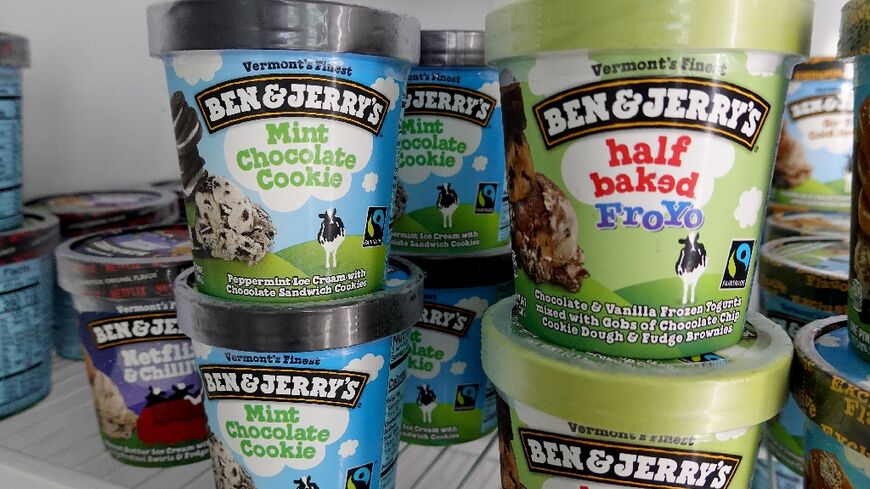 Vermont-based Ben & Jerry's, the company known for championing progressive causes, has filed an injunction against its parent company to prevent the sale of its product in the West Bank - JOE RAEDLE
Agence France-Presse
July 5, 2022 — New York (AFP)

American ice cream brand Ben & Jerry's said Tuesday it is suing its parent company Unilever to block a move that would see its product sold in West Bank settlements, which would run counter to its values.

The company, known for its political activism, took the unusual step seeking an injunction after London-based Unilever last week announced it had sold its interest in the ice cream to Israeli license-holder Avi Zinger.

The legal action was "essential to ... protect the brand and social integrity Ben & Jerry's has spent decades building," according to the complaint filed in a US district court.

Unilever's decision was "made without the consent of Ben & Jerry's Independent Board," and goes against the merger agreement that gave the board the ability to protect the founder's values and reputation, the complaint said.

In July last year, Vermont-based Ben & Jerry's announced it would no longer sell its ice cream in the Israeli-occupied Palestinian territories, which the Jewish state seized in 1967, saying it was "inconsistent with our values," although it said it planned to keep selling its products in Israel.

However, Zinger had continued to produce the ice cream in his factory in the suburbs of Tel Aviv and distribute it to the Israeli settlements, going against Ben & Jerry's decision.

Hundreds of thousands of Jewish settlers live in the occupied West Bank and east Jerusalem, in communities widely regarded as illegal under international law.

Palestinians cheered the company's move last year, seen as a victory for the BDS movement, which calls for boycott, divestment and sanctions of the Jewish state over what it describes as the mistreatment of Palestinians.

Founded in the United States in 1978, Ben & Jerry's is known for championing progressive causes, including protecting the environment and promoting human rights, and has frequently released special ice cream flavors to support causes or in protest.

Unilever, which last week said it had "never expressed any support" for the BDS movement, defended its right to execute the transaction.

"As we said in our statement of 29th June, Unilever had the right to enter this arrangement. The deal has already closed," the company said Tuesday, adding "We do not comment on pending litigation."