US citizen in Iran prison appeals to Biden for deal 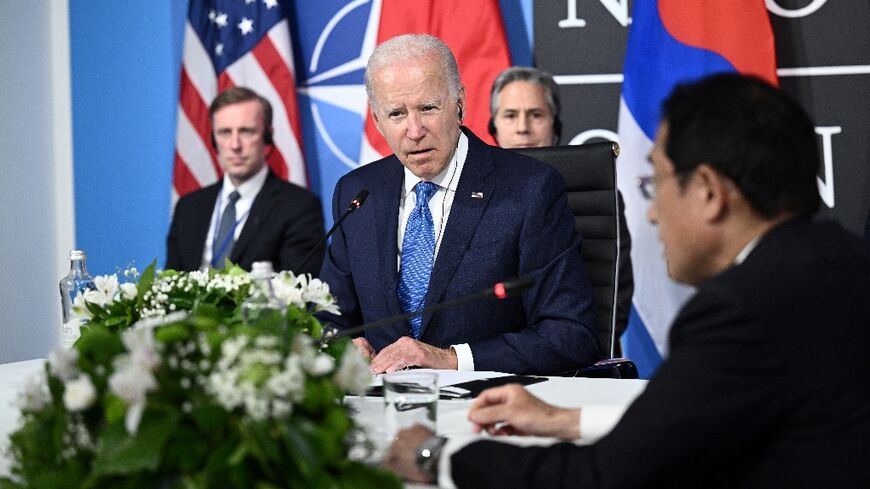 US President Joe Biden, seen at a NATO summit in Madrid, has heard a public appeal from an Iranian-American to hep free him from prison - Brendan SMIALOWSKI
Agence France-Presse
June 29, 2022 — Washington (AFP)

A US citizen held for nearly seven years in Iran made an appeal from prison Wednesday to President Joe Biden, urging a deal to free Americans regardless of the outcome of nuclear diplomacy.

In an op-ed published in The New York Times, 50-year-old Iranian-American Siamak Namazi said he was concerned about repercussions he might suffer for speaking out while confined to Tehran's infamous Evin prison.

"But I am compelled to break that silence now because I believe that the Biden administration's approach to rescuing Americans in distress in Iran has failed spectacularly so far and unless the president intervenes immediately, we are likely to languish in this abyss for the foreseeable future," he wrote.

"Mr. Biden, I implore you to put the lives of innocent American detainees above Washington politics and make the tough decisions necessary to free all of us immediately."

Namazi said he had been hopeful last year as the new Biden administration opened talks with Iran on returning to a 2015 nuclear deal, with US officials indicating an agreement was impossible without freeing four Americans.

"That was the right approach. But forgoing an opportunity to free us because the nuclear talks have stalled is not," he wrote.

Namazi, a businessman, was arrested in October 2015 and handed a 10-year sentence on charges of seeking to overthrow the clerical state, with evidence cited including his fellowships at Washington think tanks.

His father, former UNICEF official Baquer Namazi, was taken into custody in February 2016 as he tried to see him.

The now 85-year-old was ordered released in 2020 but his supporters say he has been denied a passport to travel, despite mounting health concerns, as Iran does not recognize dual nationality.

Iranian media have earlier indicated that a deal was in the works to free Iranian-Americans in return for South Korea releasing some $7 billion frozen on US requests.

Iran released five prisoners in 2016 to coincide with the nuclear deal, which promised sanctions relief in return for Tehran drastically scaling back its sensitive atomic work.

Former US president Donald Trump renounced the accord and the Biden administration has been increasingly pessimistic about returning to the accord, although it is holding a new round of indirect talks this week in Qatar.

Two other US citizens are known to be jailed in Iran -- conservationist Morad Tahbaz, who additionally holds British citizenship, and businessman Emad Shargi.