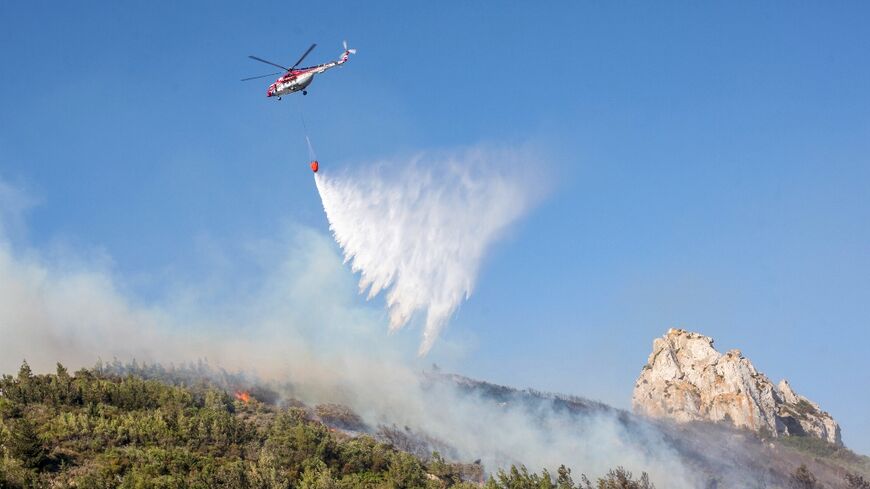 A helicopter drops water on a forest fire in the Kyrenia mountains of the self-proclaimed Turkish Republic of Northern Cyprus on June 24, 2022 - Birol BEBEK
Agence France-Presse
June 27, 2022 — Nicosia (AFP)

Trust among the Greek- and Turkish-Cypriot communities on their divided island is at a low point but their cooperation in combatting last week's wildfire was "very positive", a senior UN diplomat said Monday.

"I thanked him for the support of the Greek Cypriots for the terrible fire that had been raging in the north over a few days last week," Stewart said.

"It illustrates a fundamental point about this island, and that is the solidarity amongst Cypriots," he told reporters.

"When the time came, there was unhesitating and unquestioned assistance from Greek Cypriots for Turkish Cypriots who were in this difficult situation, and I think this is a very positive thing," he added.

Cyprus has been divided since 1974, when mainland Turkish forces occupied the island's northern third in response to a military coup sponsored by the junta then in power in Greece.

The UN official is consulting Cypriot leaders on the UN peacekeeping mandate, up for its six-monthly renewal before the Security Council.

There have been no UN-sponsored peace talks to resolve the island's division since a Cyprus conference collapsed in Switzerland in July 2017.

Relations between the two sides have hardened over the interim, and Stewart said trust-building was a priority.

He said the two sides need to "build trust... as a foundation for finding some way to move forward on the political process".

Aircraft from both sides of Cyprus, as well as the British military on the island and Israeli personnel responded to calls for help to fight the fire, which broke out Tuesday.

Turkish-Cypriot authorities said more than 6,500 acres (2,600 hectares) had been burned.