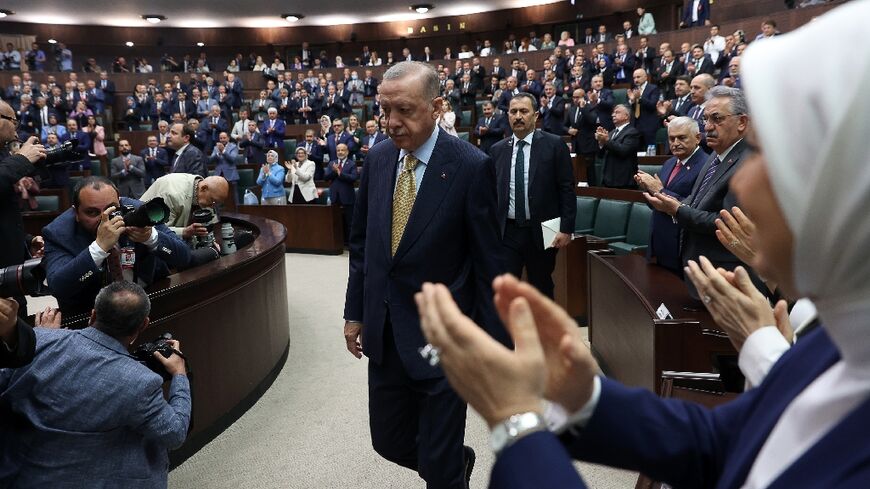 Turkey's President Recep Tayyip Erdogan on Wednesday renewed threats of a military offensive in northern Syria, which he said would target Kurdish "terrorists".

"We are taking another step in establishing a 30-kilometre security zone along our southern border. We will clean up Tal Rifaat and Manbij", he said, referring to two northern Syrian cities.

Erdogan said they would then proceed, "step by step, into other regions".

For a week now, Turkey's leader has been threatening to launch an operation against fighters of the Kurdistan Workers' Party (PKK).

He is also targeting the People's Protection Units (YPG), a Syrian-Kurdish group it considers to be part of the PKK.

"We will see who supports the legitimate security operations carried out by Turkey and who tries to oppose them," said Erdogan.

The YPG-linked Syrian Democratic Forces warned that an invasion by Ankara would undermine efforts to combat Islamic State group jihadists in Syria's northeast.

"The SDF has been expecting a possible battle for a while now," said Farhad Shami, a spokesperson for the Kurdish-led force.

"In the event of an attack, we will pause our war against the Islamic State group and start military measures against the Turkish invasion," he told AFP.

Erdogan said over the weekend that Turkey would not wait for permission from the United States before launching such an operation.

Washington last week warned Turkey against launching a military operation into northern Syria, saying it would undermine regional stability and put US forces serving there at risk.

Erdogan on Tuesday told Russian President Vladimir Putin that a 2019 agreement signed between the two countries allowed for the creation of a security zone along the Turkish-Syrian border.

"Its creation is imperative," Erdogan said.

He has also opposed the recent applications of Finland and Sweden for NATO membership, over what it considers their leniency toward Kurdish militant groups.

Both Manbij and Tal Rifaat host large Kurdish populations and lie near Turkey's border with Syria.

Their capture would allow Erdogan to expand and deepen the so-called "safe zone" along the border where Ankara hopes to resettle Syrian refugees.