Pressure ramps up on Turkish news media as elections near 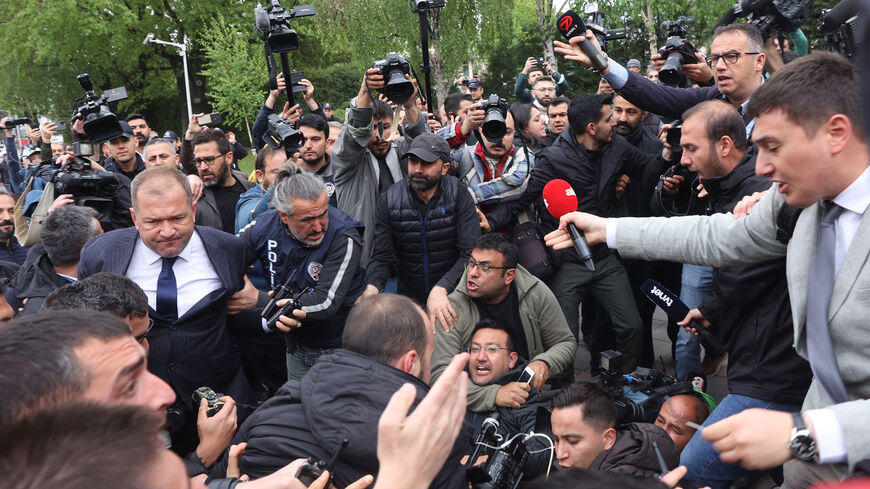 Turkish police intervene, moving journalists, as the leader of recently formed Turkish nationalist Victory Party or Zafer Partisi, speaks to the media after police blocked his attempt to challenge the Turkish Interior Minister to a public face-off in Ankara on May 6, 2022. - ADEM ALTAN/AFP via Getty Images

Turkey’s independent news televisions are crashing under heavy fines and penalties by the country’s broadcasting watchdog RTUK. TV executives say RTUK is trying to force them to cave by imposing self-censorship or selling their broadcasting licenses ahead of the upcoming election period.

The fines came as the Turkish is expected to pass a draft bill criminalizing social media posts deemed as “fake” and amid a mass arrest of the journalists in Turkey’s predominantly Kurdish southeast, underscoring the fears of increasing pressure on the media ahead of the elections scheduled for June 2023.

The latest in a string of controversies surrounding the RTUK decisions came after the watchdog slapped heavy fines on five TV stations that aired a statement by Turkey’s main opposition leader Kemal Kilicdaroglu. Citing loaded money transfers to the United States by education foundations tied to President Recep Tayyip Erdogan’s personal circle, Kilicdaroglu claimed that the transfers were part of the president’s plans to “flee the country” if he loses the upcoming election.

“These fines are upending the concept of newsworthiness,” Turkish columnist and former professor of communication Tezcan Durna told Al-Monitor. "Journalism in Turkey was already difficult, but now it has become impossible," he added.

In a video posted on Twitter May 24, Kilicdaroglu, leader of the People’s Republican Party (CHP), claimed that transfers worth more than $60 million were funneled to a New York-based Turken Foundation, a body also known to be close to Erdogan’s personal circle. While no pro-government media outlets and TV stations covered the allegations, the five televisions that aired the statement were fined for disseminating “false news.” In a demonstration in front the watchdog’s Ankara office on June 8, the Journalists Union of Turkey denounced the move.

According to Esra Kocak, the head of the union's Ankara branch, the latest fines signal to journalists that they “cannot cover any stories critical to the government.” Kocak also pointed to some official documents partly confirming the money transfers that the main opposition leader mentioned.

Only days after the heavy penalties were meted out to the TV stations, Erdogan branded Gezi protesters as “rotten” and “sluts” for joining the 2013 protests, which started as a small demonstration at Istanbul’s main Taksim Square and became weeks of massive nationwide protests against the increasing authoritarianism of Erdogan's rule. The watchdog refused to discuss these remarks, which amounted to “insults,” a violation of the RTUK rules.

A request by Ilhan Tasci, a RTUK member selected by parliament’s opposition parties, to formally discuss Erdogan's remarks at a council session has gone unanswered.

“RTUK Chairman Ebubekir Sahin has the authority to decide which issues to be discussed at RTUK sessions,” Tasci explained to Al-Monitor, adding that he was still waiting for a formal response to his official request.

Yet Tasci believes even a discussion over Erdogan's remarks is highly unlikely as it would “take a highly brave step.” The watchdog's head has been seeking to stay in Erdogan’s “good graces in his every step and action,” Tasci said.

The latest episode stands as just one example of RTUK’s several controversial decisions that critics argue blatantly violates the council’s impartiality principle in favor of the government. While no pro-government televisions has been punished, the watchdog fined independent and pro-opposition TV stations 71 times in 2021 alone, with the total cost of the fines reaching more than $1 million.

Critics argue that in addition to suppressing the opposition, additional motives are in play.

Merdan Yanardag, chief executive of TELE-1, said that the fines aim to force the station to sell its broadcasting license. “We will never allow this to happen,” Yanardag told Al-Monitor. TELE-1 television faces closure if it fails to pay some $115,000 fine until June 22.

Most of the independent stations cannot run advertisements from public institutions. The number of commercials by leading private companies, meanwhile, remain limited, “because they are afraid of the government,” Toktas said.

At the heart of the controversial RTUK decisions lies the composition of the higher board. Six members including the chairman of the nine-member board were elected by the ruling party and their nationalist allies with three remaining seats were elected by the main opposition and Turkey’s pro-Kurdish Peoples’ Democratic Party (HDP). Ali Urkut, who was elected by the HDP, which emerged as the third largest opposition party from the previous general elections, remains behind bars on terror-related charges.

“There is no trace left of a RTUK that is at an equal distance to all broadcasters. It is not about whether there is a violation or not anymore; rather, it’s about which stations are violating or which are airing an offensive remark,” Tasci said.

“In the past, RTUK ruled that insulting an opposition lawmaker by referring to him as a ‘panderer’ should be considered within the scope of freedom of expression,” he said, adding that independent news stations were fined by the board for far lighter words. “Today RTUK views the screens through the lenses of the government."

Free and fair representation has long been under the scrutiny of international organizations, with Europe's main election observation body urging the government after previous elections to allow media outlets "to operate free from intimidation or pressure."

“The overall campaign coverage was characterized by unbalanced, extensive and unchallenged promotion of [Erdogan], including by the public broadcaster, while the main opposition candidate was negatively covered in the news and current affairs, to such an extent that at times he received more coverage than any other contestant,” the Organization for Security and Co-operation in Europe said in a report published after the 2018 elections.

Yet coupled with the government's tightening grip over the opposition parties, internet and press, the RTUK’s fines fuel concerns that the upcoming election period will likely see an even more challenging atmosphere for opposition parties.

Former RTUK member Ismet Demirdogen agrees. Arguing that the board was entirely relying on Erdogan’s instructions in its decision making, the watchdog has “turned into a stick” at the hands of the government, he said.