Colleagues of 20 detained journalists say they believe their arrests are tied to Turkey’s planned military operation against Syrian Kurdish militants. 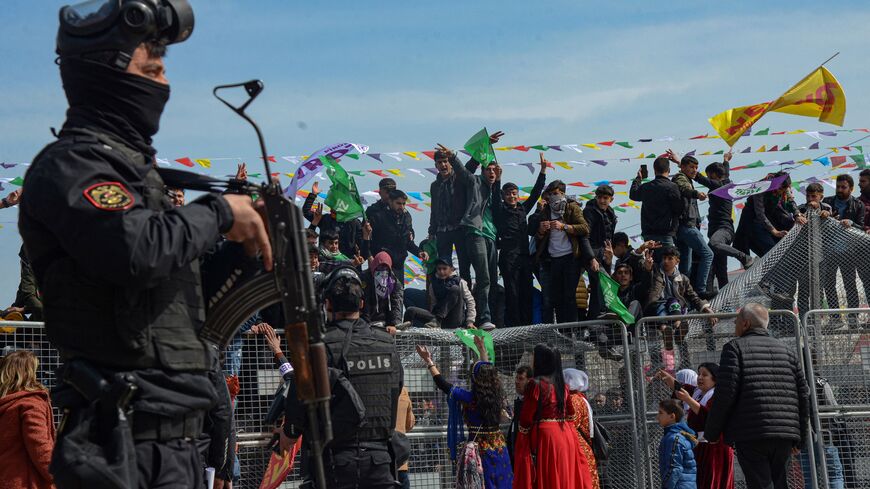 ISTANBUL — Twenty journalists from Turkey’s Kurdish-majority city of Diyarbakir were spending their seventh day in custody on Tuesday for unknown reasons. But press freedom activists claim it's connected to Ankara’s planned military operation in northern Syria.

The journalists were rounded up in early morning police raids on their homes on June 8. The offices of their media outlets were searched and computers and other equipment seized. Two non-journalists were also detained in the operation.

Their lawyers say they have been denied access to case documents and do not know the reason for the detentions. The detainees reportedly appeared before a prosecutor on Tuesday to give statements in their defense.

Prosecutors in Diyarbakir have placed a gag order on the investigation but official media outlets such as the state-run Anadolu Agency reported the arrests were part of an anti-terrorism operation against the Kurdistan Workers Party (PKK).

The agency said the arrests were carried out after police analyzed 82 hours of television programming broadcast from Belgium and the United Kingdom. The footage allegedly included content supporting the PKK and spreading its messages.

The PKK is designated a terror group by the United States and European Union. It has waged a 38-year insurgency against Turkey that has led to tens of thousands of deaths.

Colleagues of the journalists have suggested that a planned operation against the PKK’s Syrian wing, the People’s Protection Units, in Syria could be behind the arrests.

In recent weeks Turkish President Recep Tayyip Erdogan has pledged to carry out another incursion into the part of northeastern Syria under the control of groups linked to the PKK.

Turkey launched a new military offensive against the PKK in northern Iraq in April. Analysts have said the war in Ukraine, as well as Ankara’s veto over Swedish and Finnish NATO membership, could provide diplomatic cover for an operation in Syria. A similar incursion into Syria in October 2019 led to widespread international condemnation.

“The government got some leverage and now it’s exploiting it to the full extent,” he told Al-Monitor.

The international community’s limited response to the lengthy jail sentences passed down to philanthropist Osman Kavala and seven other defendants in April had also persuaded the government that it has a free hand to pursue opponents, Saka added.

The imprisoned journalists include staff from the Mezopotamya News Agency, the all-female JinNews and Serdar Altan, the co-president of the Dicle Firat Journalists Association in Diyarbakir.

“According to information leaked by pro-government media, the people detained include people who reported, provided commentary for or worked as anchors for Kurdish media stations such as Roj TV and Medya Haber,” Sedat Yilmaz, a senior editor at the Mezopotamya news agency, told the Media and Law Studies Association.

He added that sources close to the ruling party said the detentions sought to silence opposing views to the planned military incursion in Syria.

In a message released through lawyers, Altan said Turkey’s worsening economic crisis and looming elections could also have played a part in their arrests.

"We don’t know what we are accused of," said Mezopotamya editor Aziz Oruc. "We ask the police why we were detained, but they don’t know either. They just say, ‘There is an order.’”

Hundreds of journalists and dozens of media organizations have voiced support for the detainees. “The detention of Kurdish journalists on the grounds of an investigation by the Diyarbakir Chief Public Prosecutor’s Office is a blow to press freedom,” they said in a statement released in Turkish, Kurdish, Armenian and English.

They also called on opposition parties to show solidarity with the detained journalists and for the judiciary “not to become an instrument of the government’s unlawfulness and tyranny” and release them as soon as possible.

Journalists working in Turkey often face prosecution over their work, with some of the most common charges being support for terrorist groups or insulting public officials. Media rights watchdog Reporters Without Borders places the country 149th in its World Press Freedom Index of 180 states.

Speaking outside JinNews’ office on Tuesday, editor Beritan Canozer said the detainees were being held because of their work as journalists.

“In addition, the production buildings where our colleagues work are still under police blockade,” she added. “They claim that they are still searching the offices on the seventh day. This unprecedented situation shows that the main purpose of the government is to silence the free press and make it unworkable.”

Journalists and Kurdish activists have often faced pressure over their activities, media academic Saka said. “This time it’s both the Kurdish dimension but also a crackdown on journalism in general. It’s overlapping in this case.”