Knesset speaker Micky Levy participated today at the gay pride parade in Jerusalem, condemning death threats that were sent earlier this week to an organizer of the parade and several legislators. 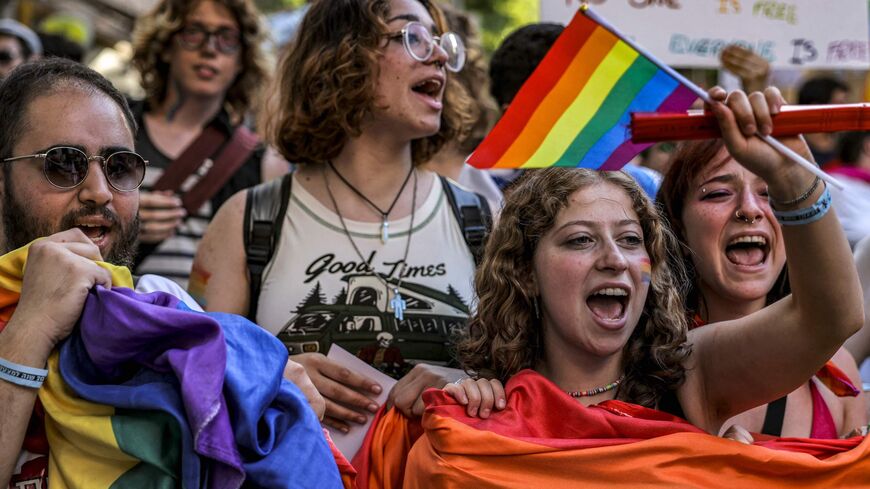 Participants chant slogans as they march during the annual Jerusalem Pride Parade in the city center on June 2, 2022. - RONALDO SCHEMIDT/AFP via Getty Images

Thousands of people marched this afternoon in Jerusalem at the annual gay pride parade. Participants gathered first at Jerusalem’s Liberty Bell Park for a happening before starting to march. The march ended later in the evening at the municipal Independence Park with a musical performance.

Knesset speaker Mickey Levy addressed the crowd at the park in a first for a person of his position. "Twenty years ago, as [police] commander of the Jerusalem district, I had the honor to first authorize the pride parade in Jerusalem, and now I am here as speaker of the Knesset. A real closure," said Levy.

Addressing the issue of threats that were sent in recent days against organizers of the parade and Knesset members, Levy said, "I was shocked to the core of my being by the heinous calls for murder and foul words targeted at the LGBTQ community, incitement that has already led to murder in the past."

Levy then added that "the march in Jerusalem is not a provocation. Jerusalem is the capital of the State of Israel, and the entire public has the right to march there."

Transportation Minister Merav Michaeli of the Labor party and Health Minister Nitzan Horowitz of left-wing Meretz also participated. Both Michaeli and Horowitz have participated many times over the years in the parade in Jerusalem and in other cities.

The parents of Shira Banki, who was stabbed to death at the 2015 gay pride march by ultra-Orthodox extremist Yishai Schlissel at the age of 16, recited a prayer before the march. Yesterday, Shira's father, Ori, condemned the threats, calling them “terribly sad” and “a waste.” Interviewed by Israel’s public broadcaster Kan, Ori said, “Shira was a young, politically conscious girl.” The father said Shira participated in many pride rallies because advancing LGBTQ rights was an important goal for her.

Over the years, ultra-Orthodox activists have protested in different forms against the march.

Yesterday, police said they had arrested a Jerusalem resident who had sent anonymous death threats to an organizer of the parade and to several lawmakers. The messages were sent on Twitter and Facebook from a social media profile named "the brothers of Yishai Schlissel." The threats warned that "the fate of Shira Banki" was "awaiting" them.

Earlier today, police detained two youngsters from Jerusalem and Beit Shemesh, who had tear gas, bats and gloves in their car, suspected of intent to attack participants in the parade.

A few dozen far-right Lehava movement and other right-wing activists held a counterprotest at Bloomfield Park across from Liberty Bell Park where the march started, with calls and slogans against the LGBTQ community.

On May 18, a gay pride march planned at the southern city of Netivot was canceled after a bullet was sent to the mother of one of the organizers.