The majority of Israel's ultra-Orthodox community appears to hold Yishai Schlissel alone responsible for the death of Shira Banki, who was stabbed at a gay pride parade, claiming it is not the fault of his religion. 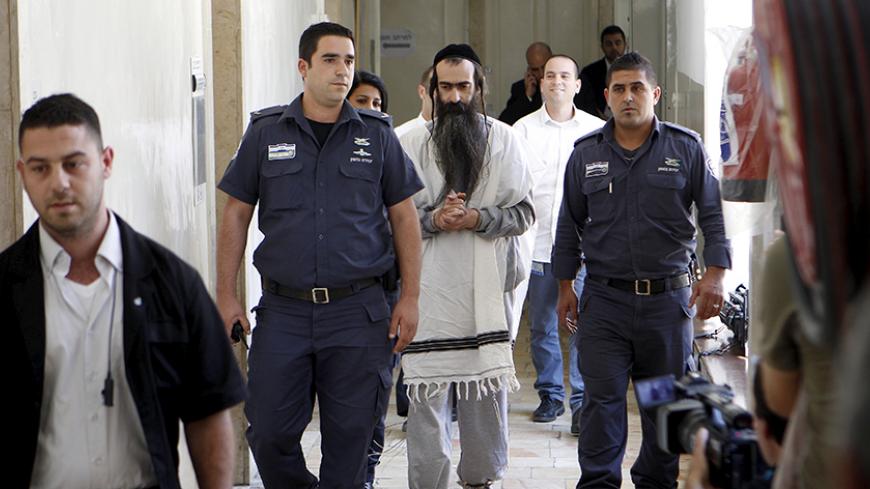 Yishai Schlissel, who stabbed six participants, killing one, at a gay pride parade in Jerusalem on July 30, is escorted by security personnel at the Jerusalem Magistrates Court, July 31, 2015. - REUTERS/Muammar Awad

The Jewish religion forbids murder and the harming of others. How, then, could a man from that community, a product of its educational system, attack participants at a gay pride event with a knife, not once but twice in 10 years? How could he claim that his motivations were religious?

The main questions the ultra-Orthodox community is asking itself are these: Does the community bear any responsibility that it should acknowledge, beyond condemning these events unequivocally? Could the fact that the murderer was raised and educated in ultra-Orthodox institutions play any part in encouraging the violence that led to murder given that his actions, according to him, were driven by religious motivations he had absorbed?

That said, the ultra-Orthodox community is adamantly opposed to the LGBT community based on the religious prohibition against homosexual relations. That the gay pride parade is still called the “abomination (or blasphemous) parade” by members of the community could, according to outsiders, contribute to the emergence of violent tendencies.

“But We Are Guilty,” an article on the ultra-Orthodox Kikar Shabbat website, has caused considerable consternation in the community. In the piece, the ultra-Orthodox strategist Asher Gold criticizes his community’s attitude toward the LGBT community, an attitude that he asserts led to the terrible murder.

“As delusional and detached from reality as Yishai Schlissel is,” Gold wrote, “he committed the stabbing in the name of the God of Israel, in the name of that flawed worldview that calls itself ‘ultra-Orthodox,’ which has caused so much damage to our community, both internally and externally. When Schlissel committed the stabbing, public announcements [condemning the parade, in the form of wall posters plastered throughout Jerusalem] flashed through his head.''

Gold declined to be interviewed by Al-Monitor, asserting that the debate over ultra-Orthodox responsibility for the murder should take place within the community itself, not in more public forums. He noted, however, that he stood behind everything in his article.

Based on voices from within the community, the impression is that a large part of it does not identify with Gold’s arguments. “Since when do we have to take responsibility for what crazy people do?” asked Chaim Brizel, 41, the sexton of a Jerusalem synagogue. “His motive was madness. His justification was religion. Religion should not have to apologize that crazy individuals exploit it for bad purposes. The same Torah that condemns homosexual relations also says, ‘Thou shalt not kill’ [Exodus 20:13]. This is proof that the person suffered from extreme instability, which interfered with his judgment.”

Brizel further stated, “We will continue calling the parade an ‘abomination parade,’ because the act itself is described as an ‘abomination’ in the Torah. We are ideologically opposed to the movement to promote the phenomenon in public. We consider it to be a perverse deviation from the straight and narrow path and harmful to the continued existence of the world. But that is a far cry from an attack. The fact is that apart from a single, crazy individual, the ultra-Orthodox community has never produced a murderer who pulled a knife to kill for religious reasons. We have never killed people for violating the Sabbath. We have never killed people for eating non-kosher food. Nor do we have the authority to punish people who violate the Torah. All the talk about this in the media is a case of incitement against the ultra-Orthodox sector.”

An internet poll conducted by Kikar Shabbat asked visitors to the website if the ultra-Orthodox community should apologize for what Schlissel did. At the time of writing, 64% of all respondents said “No! He is an insane individual, who acted alone and doesn’t represent anyone.” Only 13% selected, “We must [apologize]. He is presented in the media as belonging to the ultra-Orthodox community.”

The established print media in the ultra-Orthodox community did not mention the attack. This is because the ultra-Orthodox press does not cover crime, and it has a policy of not reporting on the activities of LGBT groups. The rationale behind not covering crimes or any activities that the community deems negative is the idea that constant exposure has an impact. In other words, constant exposure to criminal acts, or in this case to the gay community, provides a degree of legitimacy to something that is forbidden by Jewish law.

Nevertheless, Moshe Amar, a former chief rabbi of Jerusalem, and David Lau and Yitzhak Yosef, the two chief rabbis of Israel, both of whom affiliate with the ultra-Orthodox sector, publicly denounced the violence against the participants in the gay pride parade. In the political arena, the Sephardic (Middle Eastern) ultra-Orthodox Shas publicly condemned the incident, while the Ashkenazi (Eastern European) ultra-Orthodox Yahadut HaTorah refrained from doing so.

“It goes without saying that we firmly condemn this act, just like we condemn all acts of murder and violence,” a Yahadut HaTorah source told Al-Monitor on condition of anonymity in explaining his party’s silence. “But in this particular situation, we decided not to respond, because a response could be misinterpreted to mean that we assume a degree of responsibility, when we assume no responsibility at all. We did not incite, we did not demonstrate and we never encouraged violence. Our educational system doesn’t even mention the phenomenon. As representatives of our public, we will not respond to every criminal act, especially not an act committed by a single insane individual.”

The murder of Banki sent shockwaves through Israeli society and has resulted in a lively public discussion about attitudes toward the LGBT community. Although there are some who try to create the impression of institutionalized incitement to violence against the LGBT community by the ultra-Orthodox, it is difficult to point to such a case. The focus of attention should be on the failure of the police more so than what the murder says about groups that allegedly encourage violence.

The man with a face that should have been familiar to every policeman, and whose traditional, ultra-Orthodox clothing should have raised flags, burst through the security perimeter protecting the parade in full sight of everyone nearby. Most of all, attention should be paid to the scandalous failure in how authorities dealt with the murderer, who had been released from prison just a few weeks earlier after serving time for having committed the same exact act and who told the media that his beliefs and behavior had not changed.