The comments were made against the backdrop of an unexpected shakeup within the IRGC's intelligence wing following a series of breaches. 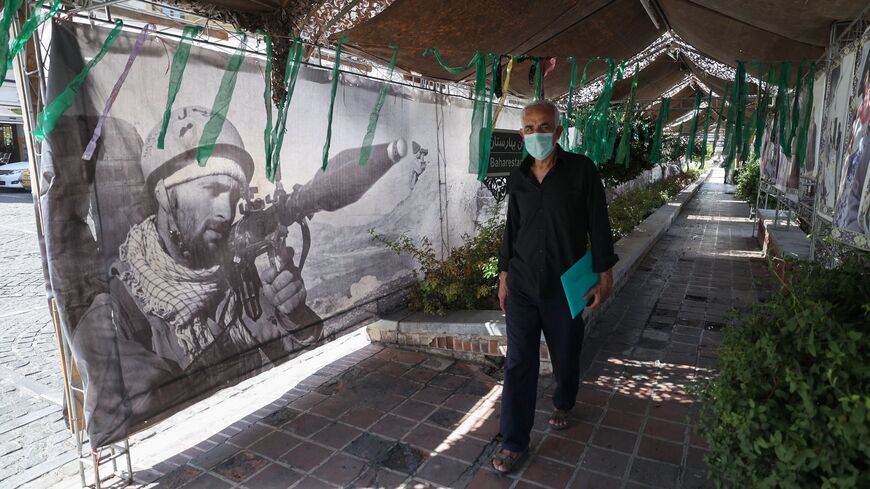 An Iranian man walks past banners at a street exhibition by Iran's army and paramilitary Revolutionary Guard force to celebrate "Defense Week", marking the 41th anniversary of the start of 1980-88 Iran-Iraq war, at the Baharestan Square in Tehran, on Sept. 25, 2021. - ATTA KENARE/AFP via Getty Images

According to the commander of Iran's Islamic Revolutionary Guard Corps (IRGC), Maj. Gen. Hossein Salami, hostile foreign spy agencies are waging a war of intelligence against the Islamic Republic.

"Our Intelligence Protection Organization is engaged in a direct confrontation with the skilled and experienced intelligence agencies of the arrogance," he declared, using a term common in the Islamic Republic's political literature to describe Iran's enemies, on top of them Israel and the United States.

Salami referred to such a war as "the most real and closest" battle Iran has faced in years, but vowed that in the meantime, Tehran will carry on "until the dusk falls on the enemies."

The IRGC commander was speaking at a ceremony in Tehran on June 30, where he inaugurated Gen. Majid Khademi as the new chief of the IRGC's Intelligence Protection Organization, which is tasked with preventing security breaches in the elite force.

The IRGC's intelligence apparatus has seen a surprise shakeup, with its shadowy director Hossein Taeb being sacked after 13 years. The hard-line cleric is currently serving as an adviser to Salami, with an IRGC spokesperson dismissing arguments that he was demoted. The tenure of the 59-year-old chief was marred by a chain of Israel-blamed attacks on Iranian nuclear scientists and atomic sites. A sharp rise in such "acts of sabotage" in the past two months has been seen as a major lapse within Taeb's organization and a blow to the greater establishment.

After pledging revenge for the latest attacks, Iran has faced Israeli allegations of plotting to target Israeli nationals abroad, a charge that Tehran has denied. The Turkish press widely reported earlier this month on the arrest of Iran agents allegedly preparing to tick Israeli names on their hit list. Speculation has been rife that Taeb teams were the masterminds of the Turkey mission, but the perceived failure due to possible leaks and the subsequent embarrassment was not tolerated by his superiors in the chain of command.

In his speech, the IRGC commander argued that Iran's "enemies have invested heavily on infiltrating the IRGC for their evil purposes," but claimed that such plots have been foiled "thanks to round-the-clock efforts by the intelligence protection forces."

Unofficial reports have in recent weeks also alluded to several arrests within the IRGC on accusations of espionage for Israel, including that of Ali Nasiri, who according to those reports was ironically serving within the higher ranks of the intelligence protection wing.

Making no reference to internal issues of the IRGC, Salami described Israel as a state "confined within massive cement walls" following failure to materialize its "daydreaming about Nile to Euphrates," a reference to the so-called Greater Israel project.

He concluded that such a failure "has tilted the balance of power in favor of the of the Islamic Republic."