Prime Minister Naftali Bennett made a quick visit to the Emirates, where he met privately with Emirati President Sheikh Mohammed bin Zayed. 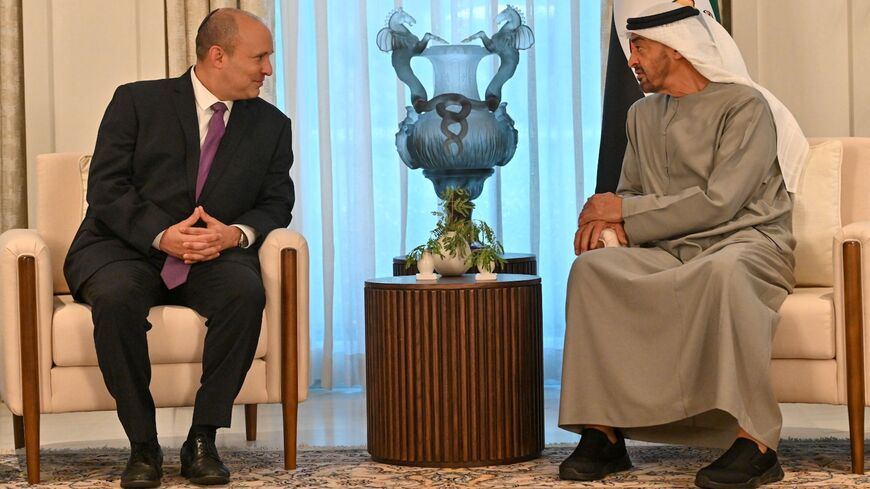 Prime Minister Naftali Bennett met this afternoon in Abu Dhabi with Emirati President Sheikh Mohammed bin Zayed. The trip was announced to the press only after Bennett landed in Abu Dhabi.

Bennett tweeted, “I arrived a short while ago to Abu Dhabi to meet my friend President Sheikh Muhammad bin Zayd and to express my condolences to the royal family on the passing of Sheikh Khalifa bin Zayd. Today, together, we will take the special bond that has been woven between our countries to the next level for the growth and security of both our peoples.”

A statement issued by the Israeli premier's office after the meeting said that Bennett traveled to Abu Dhabi at the invitation of the Emirati leader and that they met privately for about two hours. After the meeting, delegations from both sides participated in a larger meeting at the palace.

The announcement gave little details on the content of the visit. It mentioned the free trade agreement recently signed between both countries and the scope of bilateral trade and said that the leaders discussed regional issues.

The meeting came just a day after the International Atomic Energy Agency (IAEA) board of governors slammed Iran for failing to explain uranium traces found at three undeclared sites.

After the board's vote, Bennett said, "This is a significant resolution that exposes Iran's true face." He later tweeted, “Israel welcomes the resolution by the board of governors of the IAEA proving that Iran’s nuclear program is systematically violating international commitments. The world must come together to support the integrity of the IAEA and act against Iran’s pursuit of nuclear weapons."

Defense Minister Benny Gantz hailed the “important step" by the IAEA, adding, “Iran has demonstrated once again that it threatens both regional and global peace. In addition to the condemnation, the international community must take concrete steps. Every monitoring device that is turned off should be met with diplomatic and economic sanctions. We must stand united and work closely together in facing Iranian regional and global aggression."

Addressing the Knesset’s Foreign Affairs and Defense Committee June 7, Bennett warned that Israel has shifted its policy on Iran. “The past year saw a turning point in the Israeli strategy vis-à-vis Iran," he said, adding, "The State of Israel has taken action against the head of the terrorist octopus and not just against the arms as was done in previous decades. The days of immunity in which Iran attacks Israel and spreads terrorism via its regional proxies but remains unscathed are over.”

Bennett also referred to his June 3 meeting in Jerusalem with IAEA director Rafael Grossi, saying, “I clarified Israel's position, which is that we are acting and will continue to reserve the freedom to take such action against the Iranian nuclear program as may be necessary at any time, with or without an agreement. Nothing will tie our hands. … We expect that the IAEA board of governors will send a clear warning signal to the regime in Iran and clarify to it that if it continues with its policy of defiance in the nuclear sphere, they will pay a painful price for it."