Spain’s enclaves of Melilla and Ceuta in North Africa have long been a flashpoint for people seeking to enter the European Union from Africa, resulting in tensions between Morocco, Algeria and Spain. 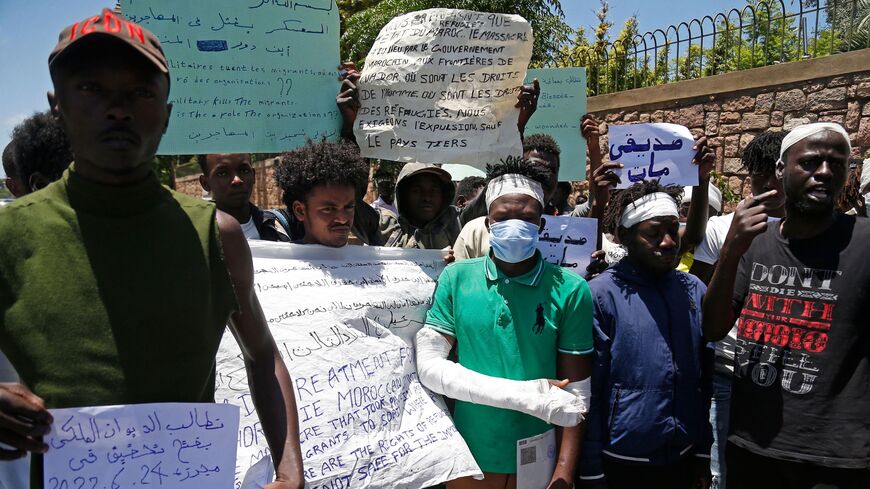 Migrants hold placards during an anti-racism demonstration in the Moroccan capital Rabat on June 28, 2022. A massive attempt by migrants to storm the barrier between Morocco and the Spanish enclave of Melilla resulted in "unprecedented violence" that killed at least 23 sub-Saharan Africans and has sparked fears of worse to come. - AFP via Getty Images

Dozens of migrants died trying to cross from Morocco into Spain over the weekend. The tragedy is part of a wider issue involving both countries, people from sub-Saharan Africa and Algeria.

What happened: On Saturday, thousands of people — most of them from sub-Saharan Africa — attempted to illegally cross from Morocco into the Spanish enclave of Melilla. The territory borders Morocco and is located on the African continent — not continental Europe like most of Spain. At least 23 migrants died, while an additional 20 plus two security officers remain in the hospital. More than 500 of the migrants successfully entered Melilla, according to Agence France-Presse.

A video obtained by the Spanish news outlet ABC showed the group climbing a metal fence when Moroccan security forces arrived and fired what appeared to be smoke grenades at the migrants. Part of the fence then collapsed, and many of the migrants fell to the ground.

Spanish Prime Minister Pedro Sanchez blamed traffickers for the incident and defended the response of Spanish and Moroccan security forces. He told The Associated Press today that some of the migrants attacked the fence with axes and hooks.

Why it matters: Security incidents in Melilla are not new. Two days before the deadly crossing attempt, Moroccan security forces clashed with migrants seeking to enter Melilla. More than 127,000 have crossed into Melilla from Morocco since the border was reopened in May, according to data obtained by the Spanish news outlet EFE.

Irregular crossings from Morocco into Spain have an impact on international relations in the region. Morocco has blamed the recent incident on longtime foe Algeria. The Moroccan Embassy in Madrid said the migrants entered Morocco via Algeria and benefitted from the country’s “deliberate laxity” toward the border with Morocco.

Morocco and Algeria have long been at odds over the Polisario Front, which fights for the independence of Western Sahara from Morocco. The group has a large presence in refugee camps in Algeria.

Last year, thousands of people illegally entered the Spanish territory of Ceuta from Morocco via rafts and swimming. At the time, Morocco was angry at Spain for allowing a Polisario Front leader to seek medical care in the country.

Like Melilla, Ceuta is located on the African continent and borders Morocco. The North African country claims both Melilla and Ceuta as its own.

It is possible that Morocco and Spain are more on the same page over the most recent incident. Sanchez told the AP that Morocco is “suffering” from the migration surge.

Know more: A particularly high number of the migrants who have tried to get into Melilla recently are from Sudan, according to the Spanish news outlet El Pais.

What’s next: The United Nations has called for a “prompt” investigation in the deaths of the migrants in Melilla.