The lawmakers called for the administration to pressure Israel on the evictions before President Joe Biden travels to Israel this summer. 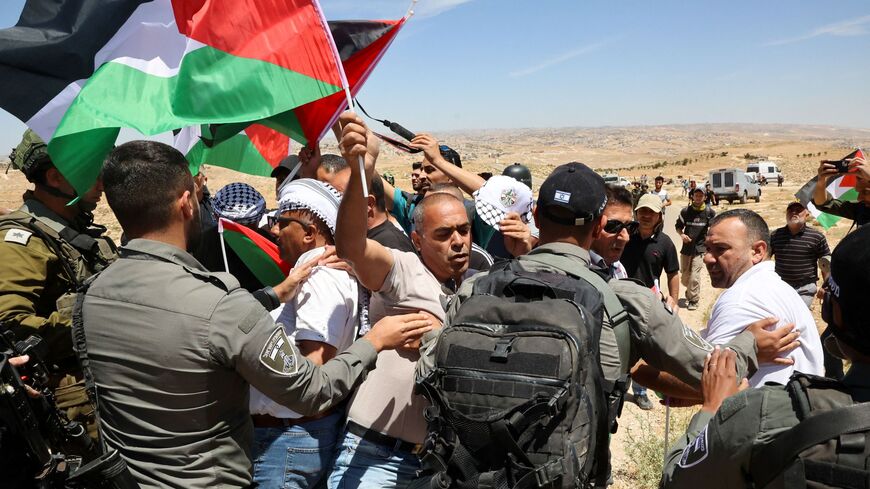 Israeli, foreign and Palestinian activists clash with security forces during a demonstration against the eviction of Palestinian villages to make way for an Israeli military training zone, in the southern hills of Yatta, south of the West Bank town of Hebron, on May 20, 2022. Israeli civil rights groups recently denounced a High Court decision that approved the eviction of roughly 1,000 Palestinian villagers to make way for a military training zone. The case of Masafer Yatta, or Firing Zone 918, an agriculture area near Hebron, has been one of Israel's longest running legal battles. - HAZEM BADER/AFP via Getty Images

As President Joe Biden gears up for an expected trip to Israel next month, a group of US lawmakers are calling on his administration to pressure the Israeli government to halt the looming evictions of more than 1,000 Palestinians from their homes in the West Bank.

Demolitions and evictions in Masafer Yatta, a rural part of the southern West Bank known to Israelis as the South Hebron Hills, are reportedly underway. Earlier this month, Israel’s highest court upheld an expulsion order affecting some 1,200 Palestinians, including some 500 children.

The court ruled the Palestinians were not permanent residents of the land when it was designated a military firing and training zone by Israel in 1981. Rights groups, however, argue some Palestinian families have lived in Masafer Yatta since before Israel captured the West Bank in 1967.

In their letter to Secretary of State Antony Blinken on Thursday, more than 80 Democrats and independents from both chambers of Congress wrote that the evictions could undermine efforts to reach a two-state solution.

"We respectfully request that you immediately engage with the Israeli government to prevent these evictions and further military training exercises in the area," the letter said.

They also called on Blinken to encourage Israel to approve master plans for Masafer Yatta villages that would allow Palestinians to build and maintain homes.

“With President Biden visiting Israel in late June, it is critical that the administration respond quickly to ensure that this momentous trip can deliver concrete steps toward peace,” they said.

Asked about the Masafer Yatta evictions on May 9, State Department spokesperson Ned Price called for both sides to avoid taking steps that exacerbate tensions. “This certainly includes evictions,” he said.

Biden came into office promising a more even-handed approach to the decades-old Palestinian-Israeli conflict. The administration has previously expressed concern over planned evictions from Sheikh Jarrah, the predominantly Palestinian neighborhood in East Jerusalem that was a flashpoint during the 11-day conflict between Israel and Hamas in May 2021.