Dozens of Turkey’s grassroots women rights groups issued a statement against racism and anti-immigrant sentiment, only to face angry reaction from many parts of the political spectrum. 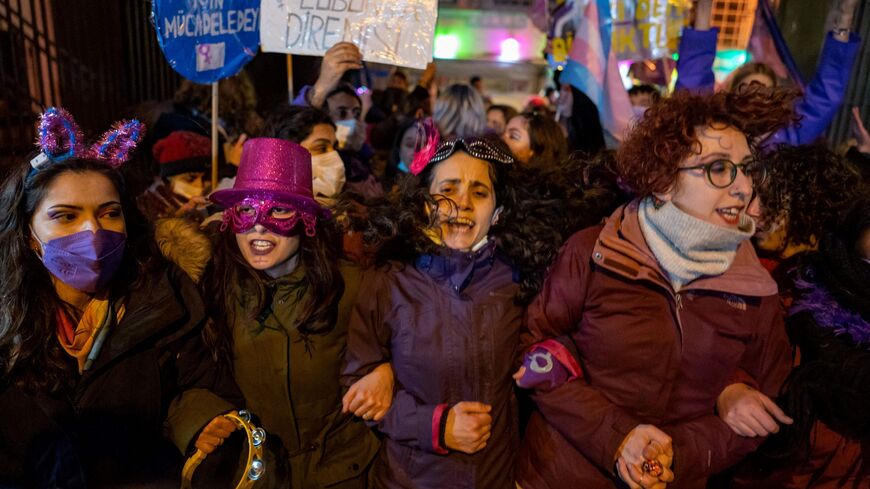 Women shout slogans against police barricades during a march to Taksim Square to mark the International Women's Day in Istanbul, on March 8, 2022. - YASIN AKGUL/AFP via Getty Images

Turkish women's rights groups have decried racism on their behalf in a show of solidarity with refugees.

In a May 22 statement signed by dozens of women's rights groups, Women Defense Network denounced the rising anti-refugee sentiment which has been fueled by “unverified” videos and “targeting immigrants as perpetrators of harassment, rape, abuse and violence.” It also raised a red flag about the dangers of spreading unverified video clips. The statement was in response to videos on Tiktok reportedly shot by refugee men, which have further fueled the already high anti-refugee sentiment in the country over the past weeks.

Although anti-immigrant rhetoric is framed around women’s safety, "We stand up against male violence. Women in this country do not feel safe, that is the problem,” Cagla Akdere from the Women’s Defense Network told Al-Monitor. “Refugees, migrants, poor, or uneducated are not the reason for female insecurities. Providing safe lives for women does not mean encouraging or normalizing racism."

The signatory groups and activists have come under fire on social media platforms following the release of the statement, with some posts including misogynistic, threatening, demeaning language.

However, “they are not afraid of speaking their minds,” Irem Afsin, a communications expert and women's rights activist, told Al-Monitor. The groups are standing up against sexual, physical or emotional violence, "without any ifs or buts and without focusing on the identities of those involved.”

Curiously, the statement has not just drawn angry reactions only from nationalist and ultranationalist corners but also from conservative and leftist circles in the increasingly contentious political climate.

“There is the shadow of the election looming,” Akdere said, and the opposition is organizing its platform around anti-immigrant sentiments. "Now we see a rising tide of racism, and it is no longer contained in right-wing politics. It has slithered into the leftist and even feminist movement, and that is dangerous.”

According to Begum Basdas, a researcher at the Hertie School Berlin Center for Fundamental Rights, the embrace of this “patriarchal” discourse by leftists is particularly surprising.

“Some left politics in Turkey surprises us, by replicating the patriarchal and discriminatory rhetoric of the governing authorities,” she told Al-Monitor. "The women’s movement still dares to take their voices and bodies to the street. Thus, they are perceived as a threat by the patriarchal system represented both by the dominant forces in right and left politics."

Anti-immigrant arguments are based on the claim that immigrants arrive in Turkey to take jobs, and health care benefits. The argument mainly relies on the “replacement theory,” claiming that the Turks “have been being replaced with other populations,” particularly with Arabs coming from Syria.

Serhat Tutkal, a political scientist from Universidad Nacional de Colombia, in Bogota, points out that women are turning into an object of almost all political controversies in Turkey. “While most anti-immigrant groups seem secular, they adopted the discourse of conservative extremists in Turkey where women from the opposing groups are seen as spoils of war,” he told Al-Monitor.

Far-right anti-immigrant groups deliberately attack left-wing women "even though these are secular women that anti-immigrant groups were supposedly protecting," Tutkal said, and other anti-immigrant Twitter users "are genuinely angry because in their mind they protect women by attacking the immigrants. What all these users have in common is that they do not acknowledge the women’s agency and they think that women who “cross the line can and should be punished.”

But, Tutkal warned, “By publicly targeting progressive women, the aim is marking all women who oppose far-right politics as ‘deserving’ of anything that may happen to them.”

Tutkal’s warning is particularly alarming in a country where violence against women and femicides are rising.