Tunisians have seen their purchasing power plummet in recent days, amid a market shortage of basic goods, soaring prices of most consumer goods and warnings of possible nationwide protests. 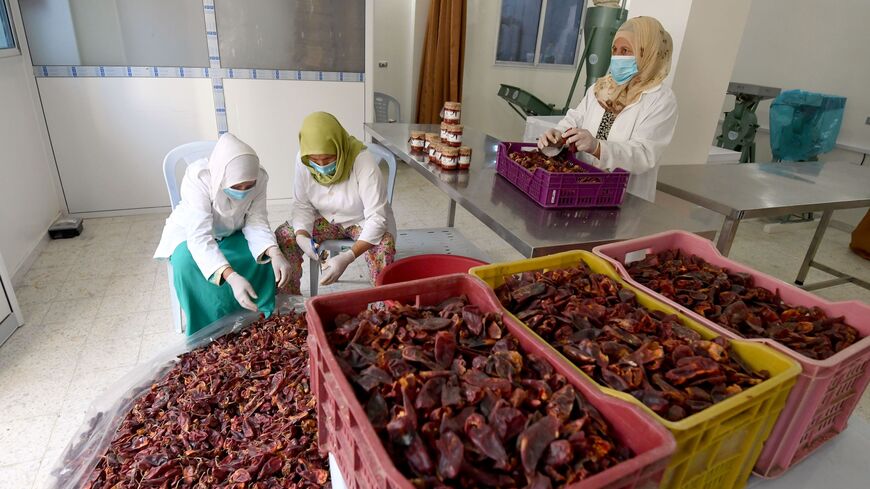 Tunisian rural women prepare red peppers which are used in the making of harissa paste, in their cooperative Menzel Mehiri in Kairouan province some 200 kilometres south of Tunis, on July 13, 2017. - FETHI BELAID/AFP via Getty Images

TUNIS — The Central Bank of Tunisia raised its main interest rate by 75 basis points to 7% on May 17, to combat inflationary pressures. The bank also raised the minimum rate of return on savings by 100 basis points up to 6%.

Mounir Ghabri, the director of customer relations at the Tunisian Company of Electricity and Gas, told Tunis Afrique Presse on May 15 that the company has approved new increases in electricity and gas prices, at rates ranging between 12.2% and 16% for domestic customers and 15% for industry.

Tunisian Minister of Industry, Mines and Energy Naila Nouira Gonji told the Mosaique radio station May 14 that fuel prices will be adjusted on a monthly basis throughout 2022. She added that the increased rate agreed upon in the Finance Law does not exceed 3% on a monthly basis, but the latest fuel price increase amounted to 5% due to the high global fuel prices.

The vice president of the National Federation of Building, Kamel Mansour, told the state radio station Shems FM on May 19 that the recent measures will cause a rise in construction prices.

The moderate Islamist Ennahda movement warned in a May 20 statement about the authoritarian regime's increasing power in parallel with the recent price hikes, which have further depreciated the purchasing power of Tunisians.

In a press conference in Kasbah May 12, Minister of Vocational Training and Employment Nasr el-Din al-Nusabi announced an increase in grain prices to support domestic farmers.

The vice president of the National Chamber of Café Owners, Sadri Bin Azouz, tolf Mosaique May 17 that cafes and restaurants have to raise their prices each time the government increases prices, and the consumer will be affected most.

Ammar Dhia, head of the nongovernmental Consumer Defense Organization, told Al-Monitor that the global economic situation is raising the cost of living. But incomes in Tunisia, he said, remain unchanged. “This has undermined the Tunisians’ purchasing power, especially low or middle income classes, who find themselves today unable to secure basic life necessities,” he said.

Minister of Trade and Export Development Fadela Rabihi Ben Hamza told Mosaique on May 11 that the increase in the prices of eggs, chicken and milk has not been determined and is still being studied. She asserted that the review of prices is due to the increase in the prices of feed and aims to cover the cost of production, taking into account the purchasing power of the citizen.

Speaking to Al-Monitor, Abdel Rahman al-Hadili, head of the nongovernmental Tunisian Forum for Economic and Social Rights, warned that the rise in prices is likely to continue amid the difficult social conditions for most Tunisians. “Tunisia will witness a social explosion and protests across all segments of Tunisian society at the end of this year and next year if the situation remains as is,” he said.

Hadili accused the Tunisian authorities of failing to adjust prices in line with the needs of the producer who is forced to keep pace with international prices. “The consumer can no longer afford these increases,” he lamented.

Sadiq Jabnoun, an expert in investment strategies, told Al-Monitor that this price hike was expected after the two years of lockdown due to the coronavirus pandemic, the accompanying economic recession and global inflation, and most recently Russia’s war on Ukraine, which affected the supply of raw materials such as wheat.

Tunisia is currently facing a shortage of basic foodstuffs, notably flour, oils and rice. Citizens are queuing outside bakeries as bakers run out of bread. Domestic cooking gas cylinders have also become hard to find in the Tunisian market.