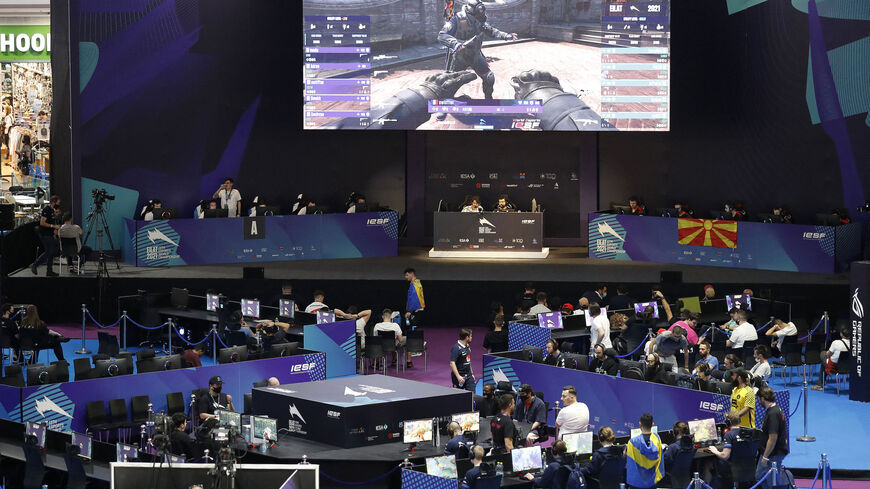 Players attend the finals of the 13th Esports World Championship in the Israeli Red Sea resort of Eilat on Nov. 18, 2021. - AHMAD GHARABLI/AFP via Getty Images

The Israeli gaming industry is relatively young, but it has already managed to record global successes in the form of companies such as CrazyLabs, Plarium and Playtika. In addition, on any given day there are at least two games from an Israeli distributor on the top 10 of global gaming rankings, both in terms of downloads and revenue, according to a recent report issued by Israeli Game Association, GameIS.

The development of the Israeli gaming industry has been made possible thanks to the advanced Israeli ecosystem and the high capabilities in areas such as monitoring, data analysis and marketing. As of 2021, the Israeli gaming industry included about 200 companies that employed roughly 14,000 with a turnover of close to $9 billion. Concerning the number of employees, the latest figure represents a significant increase from the 4,000 people working in the industry in 2017.

Israeli companies prefer the mobile platform, and according to the GameIS study, last year 27% of Israeli applications were in the field of casual and casual-hyper, 14% role-playing, 10% simulation and 9% social casino games.

Despite the successes, the gaming industry in Israel faces quite a few challenges that it will have to meet in order to reach its global status.

Guy Ben-Dov, chairman of GameIS — which was established over a decade ago to promote the gaming industry — explains that one of the problems is the image of gaming and the fact that Israeli companies started mainly through developing gambling games. However, in the last five years, the Israeli gaming industry expanded significantly with most of the expansion recorded on the mobile platform that does not require knowledge and budget-intensive productions and the process is relatively short until the game is uploaded to stores. "If the game is 'good,' it gets exposure and hence revenue generation. At the same time, the marketing side, i.e., user acquisition, has become an automatic process. In Israel, the capabilities for handling such information are considered world leaders," Ben-Dov told Al-Monitor.

He expects that growth will continue in the coming years, given the number of ventures and investments supported by entrepreneurs, although it is likely to slow down compared to recent years and certainly compared to the COVID-19 years.

But is Israeli gaming capable of expanding beyond the mobile platform? One who is actually optimistic about the future of the Israeli gaming industry in this regard is Eitan Reisel, who founded VGames, the first venture fund dedicated to gaming studios in Israel. He has been in the field for 12 years, including as the director of the gaming division at Google. VGames, which manages $200 million worth of investments, was established at the end of 2020 and has so far invested in 25 companies in Israel and abroad. Among the investments in Israel are Candivore, Super Play, Brain Games and InnPlay Labs.

Reisel tells Al-Monitor that the Israeli gaming industry is an area that is still "under the radar." He explains that in the global gaming sector there are usually few investors since it requires a different level of expertise. "When you build a game, you build content that people like to consume over time. It's similar to the film and television industry. The bottom line is that 'gaming is entertainment.'" On moving beyond the mobile platform, Reisel claims "there was no capital to set up a product that is a cross platform that costs more and takes a lot of time (to develop). However, now that we witness more budgets being directed to the industry, we observe the trend is changing. Israel will produce diverse gaming content. Israel is a digital superpower with developed infrastructure, and in a few years it will also be a global gaming superpower."

Reisel's optimism exists even though the state of the global technology industry so far in 2022 is not pleasing. For him, the advantage of gaming companies is that they are dependent on microtransactions with a wide user population and therefore are less affected by global economic trends such as inflation and high-interest rates. "A big gaming company is profitable and less dependent on external investment, and this is exactly the change we are seeing today in the market — a desire to see companies with sustainable growth prospect."

According to Reisel and others, the main problem of the Israeli gaming industry is the shortage of manpower. In recent years, organizations have emerged trying to provide solutions such as the Haifa-based Tiltan School of Design and Visual Communications, which was founded in 1994. Owner and founder Erez Isacharoff tells Al-Monitor that the idea to open a special track for gaming emerged about a decade ago when he realized that Israeli students who are interested in engaging in this field are compelled to go abroad for studies. The first and only school in Israel specializing in gaming offers a three-year track, separately for developers and designers. The school also runs a business for game development. Today the Tiltan has 170 gaming students out of a total of 700 students.

Isacharoff is familiar with the manpower problem. "We ourselves launched a campaign to recruit 87 workers in 2022 for our studio but failed to recruit them all. There are not enough workers and therefore the wage level in this domain is high. I am sure that if I had 1,000 graduates every year, everyone would be employed."

However, it turns out that gaming is not only a prospering industry in Israel but also a profession from which one can make a living, even if in the meantime there are only a few dozen. According to the president of the Israeli Esports Association, Ido Brosh, in Israel 1% of those playing earn from gaming as a profession while 99% are amateurs. Currently, there are only two Israeli gaming clubs that run like a sports club for everything, including player funding and training. But despite this, it turns out that Israel has managed to produce a gamer at the top of the world — Tal Aizik, who has so far earned about $2.5 million from competitions.

Aizik, known as "Fly," is a professional Dota 2 player and is in the world's top 30. But Aizik is the exception, and according to Brosh, the problem is that this field does not get support from state authorities like other sports. He believes that it is a pure sport since it requires from the gamer physical activity, fitness, motor ability and high mental ability. At the moment, the funds for this field come mainly from commercial sponsors who understand the potential since gaming competitions bring together a young and large audience from all over the world. Speaking to Al-Monitor, Brosh does not understand the country's disregard and claims that investing in competitive gaming will bring Israel economic benefits in the future such as high incomes, tourism and growing global interest, since gamers from all over the world are the best way to the hearts of young people.