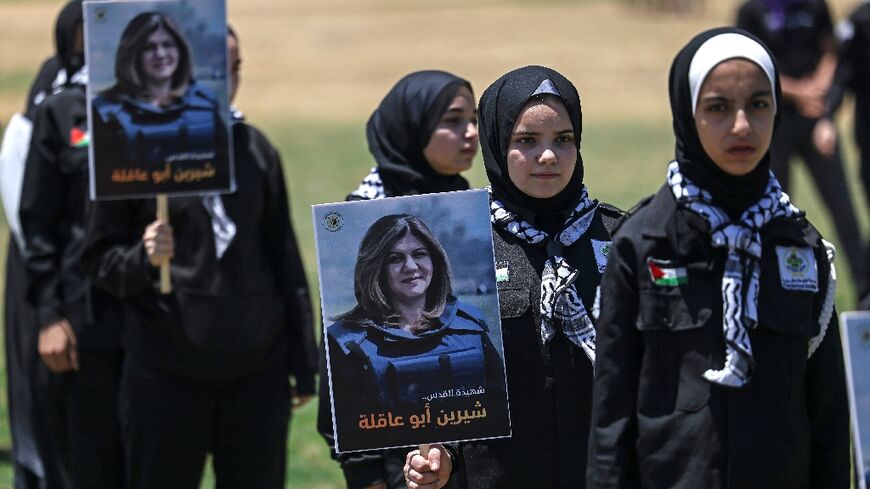 Israel's army said Monday that if an Israeli soldier fired the bullet that killed Al Jazeera journalist Shireen Abu Akleh, it did not appear that the soldier was guilty of criminal misconduct.

"Given that Ms Abu Akleh was killed in the midst of an active combat zone, there can be no immediate suspicion of criminal activity absent further evidence," it said in a statement citing Military Advocate Yifat Tomer-Yerushalmi.

Tomer-Yerushalmi will ultimately be responsible for determining whether any individual soldier faces disciplinary action over the fatal May 11 shooting during clashes in the occupied West Bank flashpoint of Jenin.

She stressed that Israel does not yet know whether Abu Akleh, a Palestinian-American, was killed by stray Palestinian gunfire or by an Israeli bullet aimed at a Palestinian militant.

The army "is taking every effort to examine the circumstances of the incident in order to understand how Ms Abu Akleh was killed," the statement said.

Tomer-Yerushalmi restated Israel's request to examine the bullet extracted from the body of the reporter. The projectile is in the Palestinian Authority's custody.

"The inability to inspect the bullet, which is being held by the Palestinian Authority, continues to cast doubt on the circumstances of Ms Abu Akleh's death," the statement said.

The army has said it had zeroed in on one incident where an Israeli soldier using "a telescopic scope" fired at a "Palestinian gunman".

That gunman "was near" to Abu Akleh, the army has said, adding that it wants to compare the bullet with the weapon fired in this incident.

Israel has offered to conduct the ballistic examination with Palestinian and American experts present.

The Palestinian Authority has rejected holding a joint probe with Israel, saying Israel was "completely responsible" for Abu Akleh's death.

The Palestinian foreign ministry said Monday it has submitted a report to the International Criminal Court (ICC) on the "execution" of Abu Akleh.

The ministry, in a statement, "called on the ICC to adopt this report in order to expedite its investigations and bring criminals and murderers to international justice".

In line with army procedures, Tomer-Yerushalmi decides on next steps in the military probe based on the initial findings, known as a commander's inquiry.

"A final decision as to whether a criminal investigation will be launched will only be made after further facts from the (army's) operational investigation and other sources are available," the statement said.