In an attempt to fill some of the most urgent gaps in mental health issues across the region, online platforms have developed tech-enabled alternatives to offer services that are safe, stigma-free and help raise awareness — although concerns about accessibility persist. 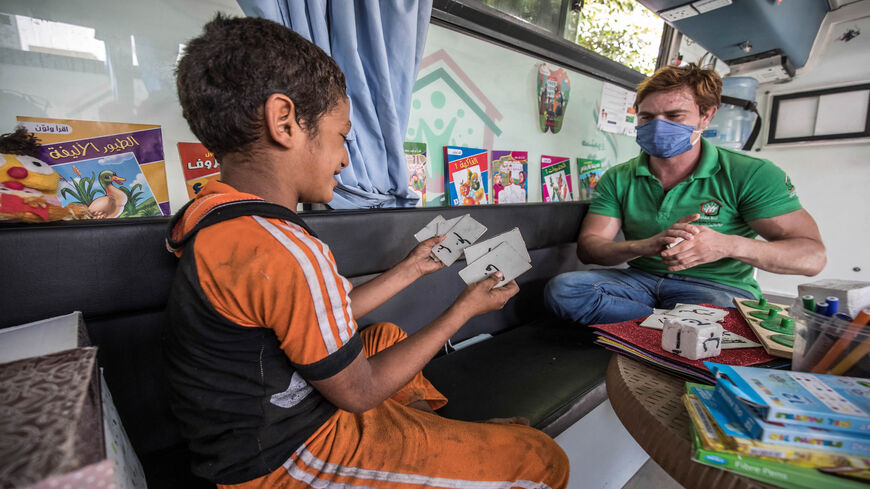 A social worker plays an educational game with a homeless child inside one of the mobile units run by the Egyptian authorities and used as part of the "Atfal bala ma'wa" (Children Without a Home) social program, Abbasia district, Cairo, Egypt, June 22, 2020. - Khaled Desouki/AFP via Getty Images

One of the most worrying consequences of the coronavirus pandemic, both when it broke out and as things began to get back to normal, has been the impact on people’s mental health around the world. Coping with the great uncertainty and changes it has brought has been a major challenge, and it has taken a huge toll on the mental well-being of millions.

Egypt has been no exception in this process and the pandemic has also affected the mental health of its citizens. A study conducted in the country in mid-2020 by three researchers from Suez Canal University found that 40% of respondents suffered a severe impact on their mental health as a result of the pandemic, including financial stress and helplessness.

Yet the impact of the pandemic on the mental health of Egyptians, severe as it may be, showed only part of a much deeper crisis. In 2018, prior to the pandemic, a country-wide survey conducted by the country’s Health Ministry with a sample of 22,000 families found that at least a quarter of Egyptians experienced mental health problems. Among the most common were depression and anxiety, particularly prevalent in rural areas. The study showed that this increased to 30% among high school students.

“There is a huge and challenging gap between the mental health services that are provided and the need [for them],” Michael Elnemais Fawzy, a psychiatrist working in a public hospital and researcher on mental health, told Al-Monitor.

Among the most often cited barriers to address this mental health crisis in Egypt are the lack of training and expertise among practitioners, general lack of resources, failure of early detection, and poor intervention and rehabilitation processes. Lack of awareness, access to mental health services, poor inclusion with the rest of the health facility system and social stigma surrounding the issue are other hurdles.

In an attempt to fill some of these most pressing gaps, online platforms and mobile apps have been developed in Egypt in recent years with the aim of offering tech-enabled alternatives to access mental health services that are safe and stigma-free and at the same time help raise awareness around mental health issues and mental well-being.

One of the most well-established platforms of this kind is O7 Therapy, launched in June 2020 and designed to provide personalized, remote and top-tier mental health services to Arabic speakers around the world, including individuals and corporations. Along the way, the Egyptian platform also aims to revolutionize awareness, support and education of mental health issues, with a special emphasis on the region from which it has emerged.

“The main goal was to build an ecosystem that allowed easy access to world-class, international-standard mental health service,” Ashraf Bacheet, a serial entrepreneur, CEO and one of the three co-founders of the startup, told Al-Monitor.

On April 4, O7 Therapy took a major leap forward by announcing that it had raised $2.1 million in a seed funding round, considered the largest ever for a Middle East-based mental health startup. The round was led, also for the first time in the region, by Hikma Ventures, the venture capital arm of multinational pharmaceutical company Hikma.

The investment round had two main purposes, Bacheet said. One is to keep developing the platform’s products, both by rolling out new programs covering specialties such as sports psychology and personality and eating disorders, and by building technology enablement to support it. The other purpose is to keep expanding outside Egypt, which now accounts for around 15% of its customers, and to break into other markets, especially in the Gulf.

Before O7 Therapy, another well-established online platform providing personalized and remote mental health services with certified professionals that made the leap from Egypt to the rest of the Middle East was Shezlong. Founded in 2014, and considered the first platform of its kind in the region, Shezlong had about 350 professionals and 120,000 users spread across 85 countries at the beginning of the year, according to the Financial Times.

According to an Arab Barometer study published in 2019 and based on a survey of more than 25,000 citizens in the Middle East and North Africa, the mental health crisis is a widespread phenomenon in the region. Survey results showed back then that roughly one-third of respondents stated that they are frequently feeling stressed and 29% that they suffer from depression. Other studies have also found that the human and financial resources allocated to mental health services in the Arab world are far below the minimum required to ensure a good service. And social stigma remains a major barrier.

“We still fear mental health to a large extend in the Arab world. And I am talking about the 90% — the people who have never been exposed to psychoeducation that I or other young, privileged young people have,” said Ally Salama, founder of EMPWR, the Middle East’s first mental health magazine and the world’s largest Arabic-language educational content in well-being. “Stigma prevents access to care,” he told Al-Monitor.

The introduction of technology in the sector, however, is allowing the development of innovative tools to improve accessibility to mental health services and device solutions to some obstacles. Both Shezlong and O7 Therapy have, for instance, developed tools for those who are not familiar with the field that consist in filling out forms that, thanks to artificial intelligence and professional review, direct users to the therapists who best fit their profile.

“It breaks down a barrier that many people have when receiving care and there is such a tremendous amount of different modalities, schools of thought, and types of therapies that function in different ways,” Monica Abadir, communications manager at O7 Therapy, told Al-Monitor. “[It] makes the experience smoother."

These platforms also facilitate mental health services for people who would have serious difficulties in accessing them in person, either because they live in remote or rural areas or because their family environment is hostile to this type of services. And they also aim to address the mental well-being in the workplace with programs designed for corporations.

“[We aim to] fill the gap that the health insurance system is not offering, which is covering the mental health of employees,” Bacheet said. “In addition health-care policies around the world generally cover at least in some capacity mental health services. But in Egypt, and most countries in the Middle East, they don’t cover it at all,” he added.

Concerns over accessibility, however, remain. “Most startups in Egypt target the rich who can afford the consultations. But most psychiatric clients are poor, because mental disorders have an impact on their education, employment and social involvement,” noted Elnemais Fawzy, who also founded the Taqet Amal Foundation for mental health services.