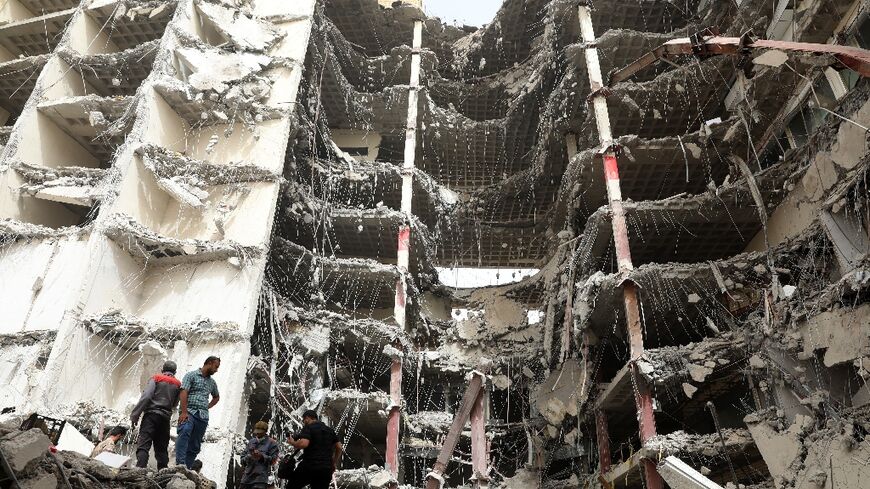 Iranians inspect the remains of the 10-storey tower block which collapsed in the southwestern city of Abadan last week, killing at least 34 people - -
Agence France-Presse
May 31, 2022 — Tehran (AFP)

A large section of the 10-storey Metropol building that was under construction in a busy street in the city of Abadan crashed to the ground on May 23, resulting in one of the country's deadliest disasters in recent years.

"With the efforts of the search and rescue forces, this evening, the body of the 36th person was pulled out from under the rubble," Abadan's governor Ehsan Abbaspour was quoted as saying by state new agency IRNA.

Five students were among the dead, said Masoud Hamidinejad, the head of Khuzestan's department of education, according to IRNA.

The latest toll leaves only two people unaccounted for from the 38 authorities had previously estimated were missing in the collapse.

A mourning service for the victims of the tragedy was held in Tehran on Tuesday, with dozens of people banging on traditional drums and hitting cymbals, local media reported.

Over the past week, night-time protests have been held in Abadan and other cities in Khuzestan province to demand that those responsible be prosecuted and punished.

"Incompetent officials must be executed" was among the slogans chanted by protesters, Iran's Fars news agency reported.

At a memorial ceremony in Abadan late on Sunday, hundreds of hecklers drowned out a speech by a local member of the Assembly of Experts, the body that selects Iran's supreme leader.

Others poured onto a platform used by state television, knocking a camera to the ground, the Tasnim news agency reported.

According to the provincial judiciary, 13 people have been arrested in connection with the building collapse, including the mayor and two former mayors.

In January 2017, 22 people, including 16 firefighters, died in a blaze that engulfed the 15-storey Plasco shopping centre in the capital Tehran.