The Iraqi authorities are warning of the high rate of desertification in the country amid other environmental and economic problems. 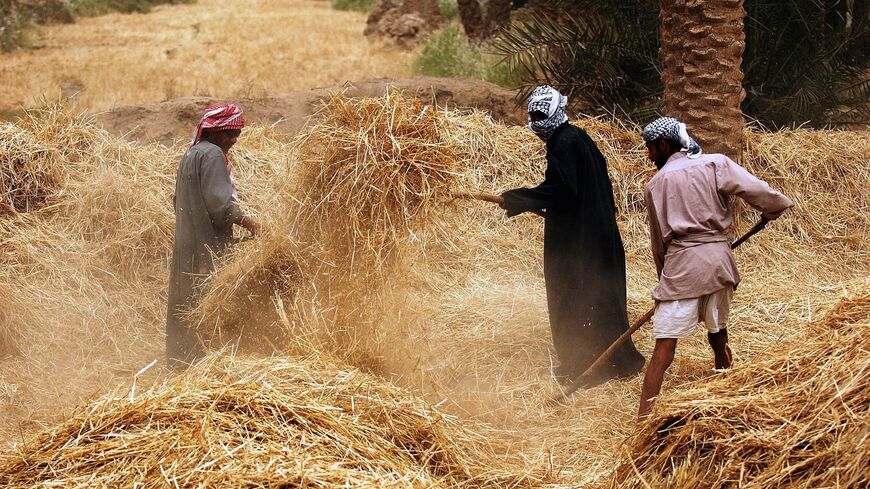 Iraqi farmers harvest barley in the village of Muaibira on May 2, 2006 in Iraq. - Wathiq Khuzaie/Getty Images

BAGHDAD — On May 8, the Iraqi Ministry of Agriculture warned that 90 percent of Iraqi agricultural land has been desertified or is at risk of desertification in the near future, due to climate change and water disputes with Iran and Turkey.

In 2020, the ministry had warned that the rate of desertification in Iraq had risen to 53%. This poses a great danger not only to the environment, but also to food security, which has become threatened after the harvest of strategic crops such as wheat, barley, and rice has dropped.

The ministry has also stated that Iraq ranks fifth in the world in severity of climate change effects.

Rawya Mazal, the official in charge of the desertification dossier at the Ministry of Agriculture, told Al-Monitor that issues contributing to the problem include global warming, drought, excessive use of water by farmers and citizens, in addition to wars and military operations.

“Iraq urgently needs to negotiate with Turkey and Iran to release water, reduce water consumption and eliminate excessive use, and establish a canal to harvest rainwater, with desert oases,” she explained. Also, reducing air pollution would mitigate the rise in temperatures.

Mazal stressed that if urgent measures are not taken, the Iraq scenario will be the worst in the region. She said that 92% of Iraq suffers from desertification or is at risk, and that Sawa Lake in Samawah has completely dried out.

Adel al-Mokhtar, Adviser to Parliament’s Agriculture Committee, told Al-Monitor that Iraq’s water reserves amount to 20 billion cubic meters, and the country may consume all of it this year. Turkey, Iran, and Syria are also suffering from a water crisis, which will require cooperation to overcome.

Primitive irrigation techniques waste strategic water reserves, Mokhtar said, as do informal fish lakes. A declining agricultural footprint may lead to the migration of as many as seven million citizens from the countryside to the cities, causing a major crisis in unemployment and service provision.

Iraq depends on the governorates of Saladin and Diyala to provide all citizens with fruits and vegetables, but they are the most affected areas in the country so far. Despite the water scarcity, Iraq plans to plant three million tons of wheat amid the global wheat crisis.

The head of the Farmers Association, Raad al-Tamimi, told Al-Monitor, “50% of the land in Diyala suffers from desertification, and the government has prevented us from cultivating strategic crops this season such as wheat, barley, and rice, which has contributed to the migration of 500,000 citizens from Diyala countryside to the city center since 2017.”

He accused the Ministry of Water Resources of wasting water in 2020 when it released water from Lake Hamrin, Hamrin and Alwand dams, and flooded orchards. That water would have been enough for Diyala and its neighboring governorates for three years, he said, and Diyala will stop supplying the country with fruits and vegetables after this season, as its lands risk complete desertification.

Tamimi called for resuming work at the Makhoul and Badush dams, which were abandoned by the previous regime, and could store over 20 billion cubic meters of water. He said that the majority of livestock in Diyala had been sold or slaughtered, due to the lack of feed and water.

The director of Al-Bayt al-Akhdar [Green House], Akram al-Salmani, told Al-Monitor that the main problem behind desertification is removing the green belt around the cities, as a result of population growth. With no government plans to build new homes, citizens have been uprooting most of the trees and bulldozing orchards to build homes. Iraq needs to plant 13 billion seedlings over 20 years, Salmami said.

The best solution, he said, is to bring in international companies to invest in lands and exploit groundwater through modern technologies, but if the situation remains the same, the Iraqi farmer will drain the groundwater in a short time.

Prime Minister Mustafa al-Kahdimi’s government began paying attention to the green economy by launching a specialized program, which includes investment in the agricultural sector, modern irrigation technology, and clean electricity production, but it is yet to be implemented since the budget has not yet been approved.