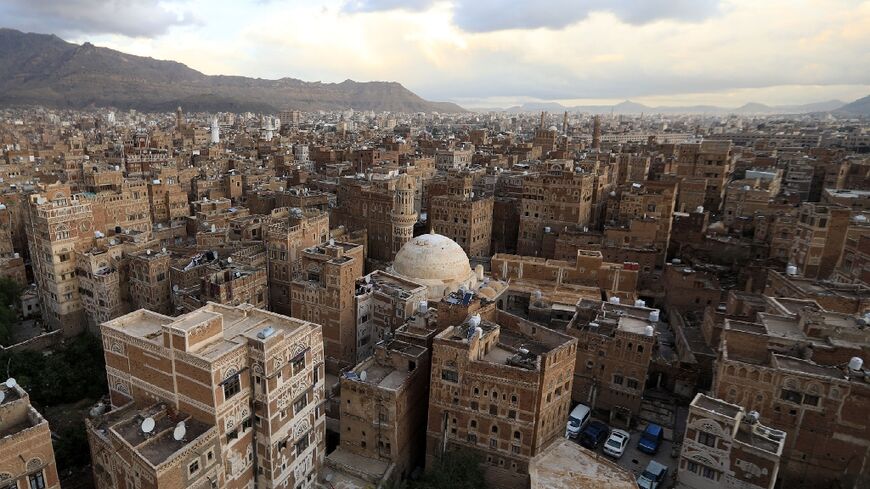 A view of the Yemeni capital Sanaa, where the Specialised Criminal Appeals Division court will review the case of four journalists facing the death penalty - MOHAMMED HUWAIS
Agence France-Presse
May 20, 2022 — Dubai (AFP)

Amnesty International has urged Yemen's Huthi rebels to free four journalists facing the death penalty for "espionage" in the war-torn country, ahead of an appeal court hearing on Sunday.

"Yemen's Huthi de facto authorities must quash the death sentences and order the immediate release of four Yemeni journalists who are facing execution following a grossly unfair trial," the rights group said in a statement on Friday.

The Iran-backed Huthis seized Sanaa from the internationally recognised government in 2014, prompting the intervention of a Saudi-led military coalition to support the government.

In April 2020, a Huthi court sentenced the four journalists to death on charges of "treason and spying for foreign states".

"This has been a sham of a trial since the beginning and has borne a terrible toll on the men and their families," said Amnesty's Middle East and North Africa deputy director Lynn Maalouf, according to the statement.

One of the detained men, Mansouri, is in a "critical health condition" with heart and other ailments, Amnesty said.

"Pending their overdue release, the journalists must be provided with urgent medical care -- the denial of medical treatment for the seriously ill is an act of cruelty which amounts to torture and other ill-treatment," the statement said.

At the time of their trial, Amnesty criticised their sentencing on "trumped-up charges", while Reporters Without Borders called the verdict "totally unacceptable".

Their arrest was motivated by their reporting on "human rights violations committed by Huthi forces," the International Federation of Journalists and the Yemeni Journalists' Syndicate have said.

An appeal will be heard by the Specialised Criminal Appeals Division in Sanaa on Sunday.

Hundreds of thousands of Yemenis have lost their lives and millions been displaced during the war, in what the United Nations has called the world's worst humanitarian crisis.