Turkey steps up attacks on Syria’s Kurds amid Iraq operation

Ankara is using the cover of Ukraine’s war to weaken the Kurdistan Workers’ Party (PKK) and associated groups in the region. 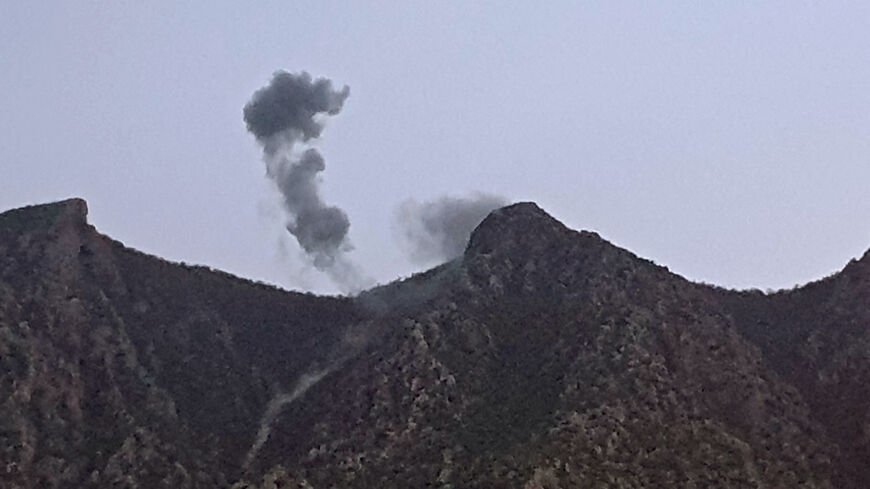 A picture taken on April 19, 2022 shows smoke billowing from behind the mountains of Matin (Jabal Matin) in the town of Chiladze following a Turkish offensive targeting rebels in the northern Iraqi Kurdish autonomous region. - AFP via Getty Images

Turkey’s military has launched a spate of strikes on Kurdish-run parts of northeast Syria over the past week as world attention is focused on Ukraine.

At least four artillery shells from the Turkish side of the border bombarded the symbolic Kurdish-majority Syrian city of Kobani on Friday. Two civilians were wounded, according to local reports.

On Wednesday, a Turkish drone strike killed the co-commander of the US-backed militia forces in Kobani and two other female fighters from the Kurdish-led Women’s Protection Units (YPJ). The group is one of the core Kurdish-led units in Syria that receives support from a US-led international military coalition in the fight against the Islamic State.

Turkey has launched four other drone strikes on the Syrian side of the border within the past ten days, two of which targeted facilities used by local security forces, spokesman for the Kurdish-led forces Farhad Shami told Al-Monitor.

Artillery from Turkish-controlled areas has also repeatedly targeted the Tal Tamr and Zarkan over the past week, killing one and wounding at least five, according to the locally-based Rojava Information Center.

The background: Ankara considers the US-backed Syrian fighters to be inextricable from the Kurdistan Workers’ Party, or PKK, a leftist militant group headquartered in the mountains of neighboring northern Iraq.

The two share a common ideology, though the Syrian factions insist they pose no threat to Turkey and have distanced their cause from that of the PKK. The US negotiated a ceasefire to halt Turkey’s attacks against the Syrian Kurdish-led fighters in 2019, but so far there has been no condemnation or statement of concern from Washington about the latest strikes.

"These attacks carried out by the Turkish state do not take place in the areas of contact and confrontation on the fronts, but directly target society," including urban centers, Peoples' Protection Units (YPG) spokesperson Nuri Mahmoud told Al-Monitor.

"The attacks occur as we strive to abide by the ceasefire agreement reached in October 2019."

"If the Turkish government's attacks on us continue, we will have to take the appropriate response to those attacks," Mahmoud told Al-Monitor.

What they’re doing: Turkey announced a full-blown military operation against the PKK in northern border areas of Iraq’s Kurdistan region earlier this week.

A blast injured several Turkish prison officers and killed one aboard a bus in the city of Bursa earlier this week, and another reportedly hit the office of Turkey Youth Foundation NGO in Istanbul Thursday. No injuries were reported in the latter incident.

Soylu on Friday blamed the Istanbul incident on Turkey’s Revolutionary Communist Party (DKP) and the Bursa bus explosion on the Marxist-Leninist Communist Party (MKLP), which he described as groups “subcontracted to the PKK.”

No evidence of the groups’ involvement was presented, though top PKK official Duran Kalkan threatened last week to bring the fight to Turkey’s cities.

What’s Next: Turkey’s attacks have worsened the already tenuous peace between the dominant Syrian Kurdish faction and minority Kurdistan National Congress (KNC). KNC offices in three cities were burned in attacks attributed to affiliates of the Syrian Democratic Union Party (PYD), a charge which a senior PYD representative denied to Al-Monitor on Wednesday.

The Syrian Kurdish forces have addressed Turkey's escalation with the US-led coalition, spokesperson Shami told Al-Monitor. “So far there has been no reaction in the field from the [US-led] coalition or Russia, which is also a guarantor of the [2019] ceasefire,” Shami said.

Al-Monitor has reached out to the US-led coalition for comment.

Know More: To stay up-to-date on Turkey’s military operations in northeast Syria, be sure to subscribe to Amberin Zaman’s weekly newsletter.

This story was updated on April 23 to include a statement by the YPG and to clarify the US military's relationship with Syrian Kurdish-led forces.