Sudan's army leaders are seeking to form a new transitional government, bypassing the efforts of the United Nations mission. 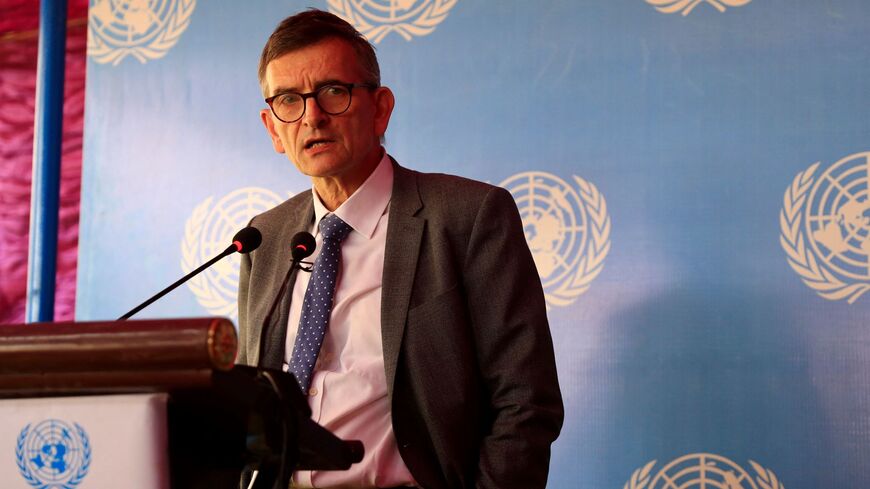 Relations between the United Nations Integrated Transition Assistance Mission Sudan UNITAMS and the leaders of the military government in Sudan are witnessing unprecedented tensions.

The tensions may affect the efforts of the UN mission to help overcome the dire political crisis in Sudan since the army-led coup in October 2021, which blew up hopes of democratic transformation.

Sudan is struggling toward civilian democratic rule, following decades of rule by former dictator Omar al-Bashir, who was ousted in the aftermath of a popular uprising in April 2019.

But Gen. Abdel Fattah al-Burhan, the army chief and the de facto ruler of Sudan, publicly threatened to expel the UN special representative in Sudan, Volker Perthes, accusing him of interfering in the country's affairs and violating the powers of his mandate.

During a graduation ceremony at the Sudanese Military College on April 1, Burhan called on the UN envoy to stop bypassing the mission's mandate and blatant interference in Sudanese affairs, or “we will kick you out.”

Burhan also called on the UN and the African Union (AU) to “facilitate dialogue between the Sudanese and not to talk about matters that they have nothing to do with.”

Burhan's statements came after Perthes' remarks before the UN Security Council on March 28, in which he criticized “the absence of a political agreement to return to an accepted transitional path” in Sudan.”

Perthes said that Sudan is heading toward an economic and security collapse and great human suffering, unless the transitional period is resumed under the leadership of civilians who were overthrown by Burhan.

The UN envoy also referred to the high level of crime and chaos, the killing of anti-coup protesters, violence against women by members of the security forces, and the arrests targeting activists and protest leaders.

Later, Burhan met with Perthes at the latter's request, and called on the UNITAMS mission to “stand at an equal distance from all political stakeholders, including the army.”

Perthes made it clear that his statement before the Security Council was derived from information prepared by his office in Khartoum, expressing his readiness to review any inaccurate information.

In January, the mission conducted preliminary consultations between the political actors in Sudan in a bid to end the current political crisis. The initiative received wide international support.

Qadi noted that the UNITAMS-facilitated consultations, which spanned over five weeks, showed that the Sudanese agree on more substantial points than they are aware of, such as “the need for an end to violence, a technocratic government or a government of experts, and a transitional legislative council.”

UNITAMS says that its role is limited to facilitating the political process only, and called on the Sudanese parties to present their visions to move forward. However, the pro-democracy groups and political parties that were ousted from power following the military coup refuse to negotiate directly with the military.

On March 29, the mission announced a coordination mechanism with the AU and the Intergovernmental Authority on Development. Qadi said, “The goal of this unique partnership is still the same: to facilitate an inclusive, Sudanese-owned, and Sudanese-led political process to address the current crisis.”

However, Qadi called on the ruling military leaders to promote the political process, including an end to violence; the release of political detainees; and a firm commitment to phase out the current emergency status in the country.

Since the military coup in October 2021, protesters have been regularly taking to the streets, calling for a civilian rule, but security forces have so far killed more than 90 people, according to an independent Sudanese medical group.

Sources close to the army leaders accuse the UN mission of siding with the pro-democracy groups. UNITAMS says it is impartial when it comes to the commitment to protect human rights, freedoms, and democracy in the country.

Osman Mirghani, a Sudanese political analyst and editor-in-chief of the independent daily Al-Tayar newspaper, said that the army leaders initially supported the UN initiative. The initial talks, he told Al-Monitor, "reached almost consensus to remove the military component from the authority, which prompted Burhan to issue his threats to expel the mission and end its work.”

However, Mirghani believes that the meeting between Burhan and Perthes has defused some of the tension between the two. But if Burhan ends the UN mission's work, "this may put Sudan in a confrontation with the international community.”

This comes as the army leaders seek to tighten their control by forming a new transitional government to bypass the UN initiative, which hopes to restore the status quo before the October coup, in which the political forces and the army shared power.

Burhan accuses the Forces of Freedom and Change, a political alliance that had shared power with the military before the coup, of working to maintain power and rule the country without elections for the longest possible period. He also rejects the structural reforms of the Sudanese army and institutions, saying that this was permissible only from an elected government.

The plan to form a government away from the pro-democracy forces is drawing the support of some political parties allied with the army, former rebels who signed a peace agreement in 2020, and some tribal and religious leaders.

The army leaders are hoping to gain the approval of the Western donor countries that have suspended funds and grants, causing the economic conditions to worsen.

Sudan has recently lost 40% of its revenues, which were secured by grants and international aid. After the coup, Western financial institutions froze the funds paid to the transitional government.

The World Bank and the International Monetary Fund froze $2 billion in aid they were about to provide to Sudan.

Yet the Friends of Sudan, a group of donor countries and institutions, links the return to a civilian-led transition to the restoration of economic aid, and international debt relief.

The army's move to form a new government will probably be opposed by the pro-democracy groups that are protesting against the coup and demanding the removal of the army permanently from any future political equation.