The robots will explain prayer rituals in Mecca and Medina in multiple languages, according to Saudi religious authorities. 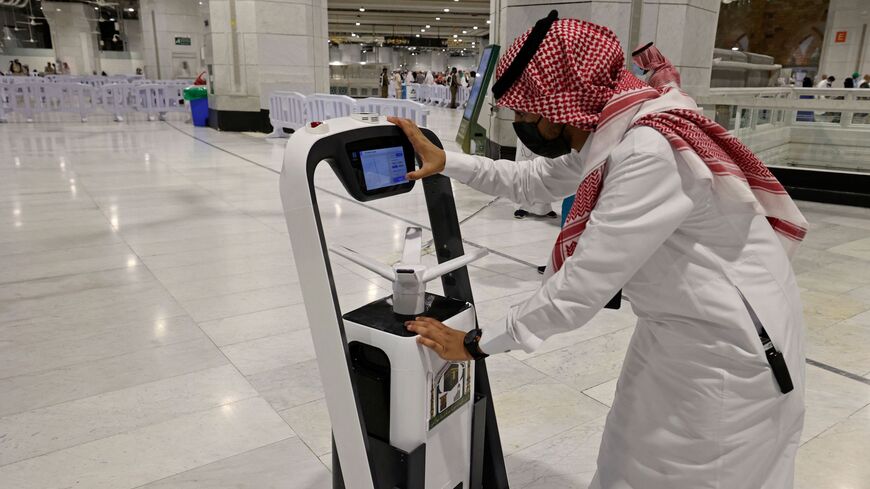 A Saudi staff member works on a robot at the Grand Mosque in Saudi Arabia's holy city of Mecca, during the yearly hajj pilgrimage on July 20, 2021. - FAYEZ NURELDINE/AFP via Getty Images

The authorities responsible for Islam’s holiest sites have announced a new fleet of robots to assist female worshippers.

The General Presidency for the Affairs of the Grand Mosque and the Prophet’s Mosque said the “smart guidance” robots will explain prayer rituals and Islamic declarations known as fatwas in the women’s sections of the Great Mosque of Mecca and the Prophet’s Mosque in Medina in Saudi Arabia. They will also answer questions about the holy sites and allow women to communicate with scholars. The robots offer answers in 11 languages including English, Turkish, Persian and Urdu as well as Arabic. The wheeled robots communicate via touch screens, read a presidential press release yesterday.

Every year, Muslims journey to Mecca for the hajj pilgrimage to pray at the Great Mosque or al-Masjid al-Haram, the holiest site in Islam. They typically also travel to the city of Medina to pray at the Prophet’s Mosque, or Al-Masjid an-Nabawi. Islam commands Muslims to perform the hajj at least once in their lifetimes. They also often visit Mecca’s holy sites at other times of the year is what is referred to as umrah. Men and women pray separately at both sites.

Saudi authorities unveiled the robots this month to assist men and women pilgrims making the umrah pilgrimage to Mecca, according to the Saudi news outlet Arab News.

Robots are not new in the holy city of Mecca. Last year, the little machines handed out water to worshippers during the hajj.

The Saudi government is exploring robots for non-religious purposes as well, and some Saudi government entities such as the state-owned oil company Aramco are investing in artificial intelligence. In 2017, Saudi Arabia notoriously granted citizenship to a female robot named Sophia.

Correction: this article was edited to clarify that the robots are available to male and female worshippers.