Iran ratchets up anti-Israeli rhetoric ahead of key rally

Iran's state-funded media called for a boost in anti-Israeli militancy as the "final battle" nears, with officials in Tehran meeting Hamas visitors and throwing rants at Arab states for normalization with Israel. 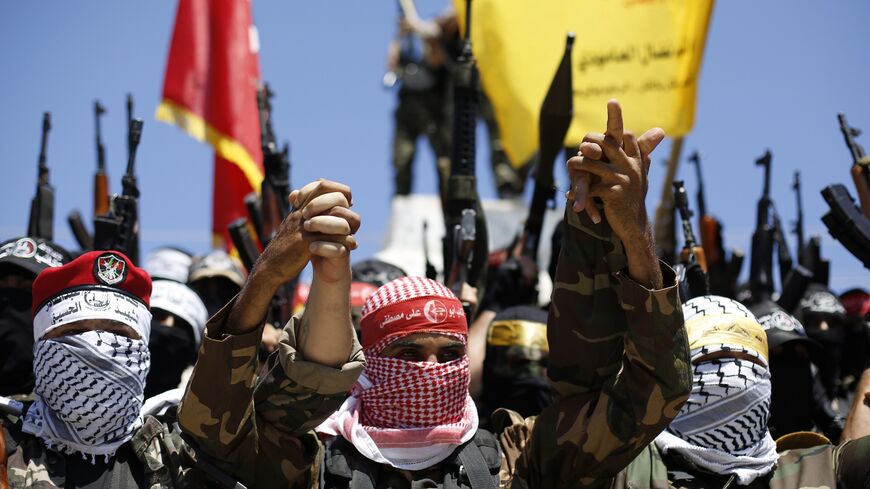 Members of various Palestinian factions pose for a picture during a demonstration to mark Quds Day in Gaza City on July 10, 2015. - MOHAMMED ABED/AFP via Getty Images

"The final battle is drawing closer," read an April 28 headline in the ultraconservative Javan daily, which is run by Iran's Islamic Revolutionary Guard Corps (IRGC), as the country was gearing up for state-organized anti-Israeli rallies dubbed Quds Day.

"This year's Quds Day is different," the paper wrote, citing a recent wave of deadly militancy launched by Palestinians targeting security forces and citizens well inside Israel. Javan argued that those attacks have turned armed struggle into an "objective reality," leaving Israel with the "unavoidable fate of destruction."

In August 1979, the founder of Iran's Islamic Republic, Ayatollah Ruhollah Khomeini, named the last Friday of the Islamic fasting month of Ramadan Quds Day, urging Muslims from across the world to take to the streets and turn up the heat on Israel. Ever since, the Iranian government has organized annual rallies, with slogans in support of the Palestinian struggle and fiery speeches against the Jewish state.

This year's public rallies are being held following a two-year pause imposed by the coronavirus restrictions, which left Iranian authorities with few options beyond symbolic car parades and televised and online events.

Ahead of the Friday rallies, Tehran was hosting a delegation from the Hamas movement. While being designated a terrorist entity by Israel, the United States, the UK and the European Union, the group has enjoyed Tehran's unequivocal financial and military support as a "legitimate resistance organization."

"The stakes should be raised higher for normalization of ties with Israel," said Iran's hard-line parliament speaker Mohammad Bagher Ghalibaf at a meeting with Hamas official Khalil al-Hayya in Tehran. Ghalibaf was pointing at regional Arab countries that have been sealing normalization pacts with Israel since 2020, a move that Tehran has condemned as a betrayal to the Palestinian cause. The Iranian speaker also advised Palestinian groups to put an armed struggle against Israel before any legal or political battles.

And yet a more harshly crafted message to Arab states recognizing Israel came from the IRGC. In a statement, the Guards labeled as "unforgivable treason" any normalization of ties with "the child-killing and fake Zionist regime." Such opening with Israel, according to the IRGC, would only render the compromising Arab states as "playmates" of the Jewish state.

On the recent flareup of violence against Israeli targets, the IRGC admired the growing power of Palestinian resistance "whose scope of threats has transcended the walls of the Zionist regime and is just heralding a massive blow-up of the very lives of the occupiers."