Furious Afghans threw rocks at the Iranian Embassy in Herat after videos went viral of Afghan refugees being mistreated in neighboring Iran. 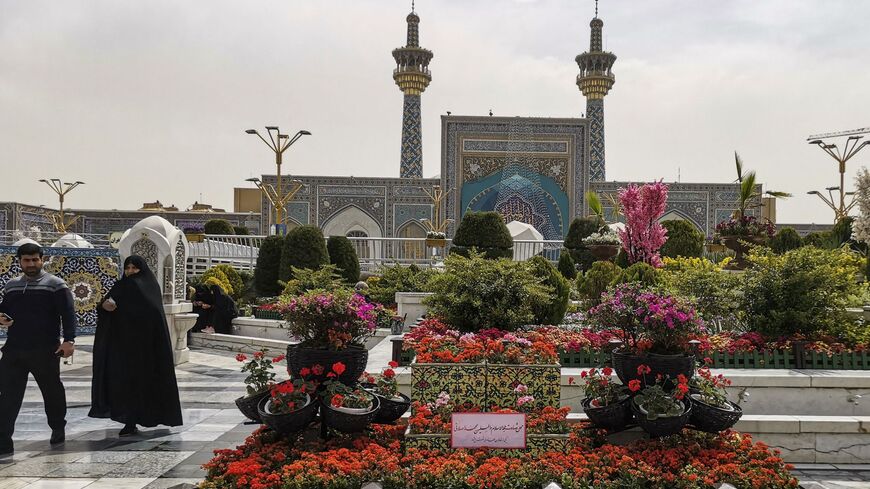 Iranians visit the spot in the courtyard of Imam Reza shrine in the northeastern city of Mashhad on April 6, 2022, where a day earlier a Muslim cleric was killed. - HADIS FAGHIRI/FARS NEWS/AFP via Getty Images

Iran's Foreign Ministry summoned the Taliban government's charge d'affaires in Tehran, presenting him with its "strongest official protest" against a series of anti-Iran rallies in Afghanistan.

The Taliban official was informed on April 12 that Iranian consulate offices will remain closed and all operations will be halted until further notice and until Tehran receives assurances from the Taliban of the "full security" of Iranian representative offices. Iranian officials also demanded legal action against the Afghan protesters involved in the attack.

Iran's move came one day after rock-throwing Afghan protesters attacked the Iranian consulate in the western city of Herat. At a similar rally, protesters set ablaze the entrance of the Iranian Embassy in Kabul, while a relatively peaceful protest was staged in the eastern Khost province.

The protesters were enraged by the mistreatment of Afghan immigrants in Iran, particularly after a video went viral last week purportedly showing an Afghan man being severely beaten up by Iranian security forces and other individuals. The incident prompted the Taliban's condemnation, with the group calling on the Iranian ambassador in Kabul to convey the "concerns" of the Afghan people and authorities regarding violence against Afghan nationals in Iran.

Earlier this month, three Shiite clerics were stabbed by an assailant inside the premises of the Imam Reza shrine in the northeastern city of Mashhad. One of the clerics died instantly and another succumbed to his injuries a few days later. Iran blamed the stabbing on an "illegal" Afghan immigrant with Sunni fundamentalist leanings.

In the wake of the incident, Iranian authorities attempted to bring matters under control by calling on both Afghans and Iranians to remain vigilant, claiming that the Mashhad incident was an "enemy plot" aimed at fuelling sectarian violence between the two neighbors.

Report on abuse of Afghan refugees in Iran is no novelty. The immigrants have repeatedly complained over decadeslong mistreatment, discrimination and xenophobic behavior at the hands of security forces as well as some other Iranians.

Denying those charges, the Islamic Republic argued that the international community ought to further appreciate its hosting of an estimated 3 million Afghans displaced by wars and other conflicts over the past 40 years.