As tensions persist in Jerusalem, Israeli Arabs feel that Israeli Jews do not fully grasp the importance of Al-Aqsa to them — both religiously and identity-wise. 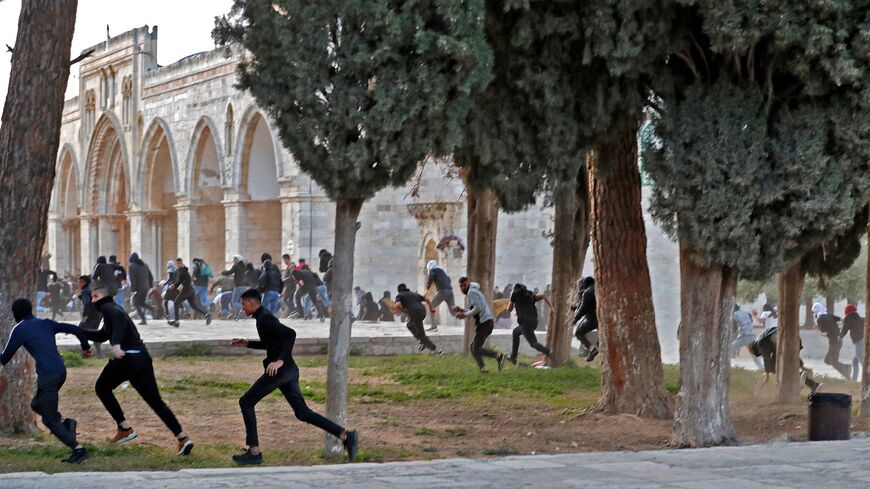 Israeli Foreign Minister Yair Lapid held a briefing for foreign correspondents April 24, a week before the end of the month of Ramadan, to announce, “Israel is committed to the status quo on the Temple Mount. Muslims pray on the Temple Mount; non-Muslims only visit. There is no change, there will be no change and we have no plans to divide the Temple Mount between the faiths.”

The briefing came after a tense weekend at Al-Aqsa, where unrest broke out April 22 between Palestinian youths and Israeli security forces. Masked Palestinians threw rocks and firecrackers and Israeli police dispersed the demonstrations with stun grenades and other means. For the first time, the Israeli police used a drone to fire tear gas grenades inside the compound.

The grim scene was streamed from Al-Aqsa via social networks across the Arab world, including within Israel. The Muslim Ra’am Party froze its membership in the coalition and its activity in the Knesset. On April 21, Jordan hosted an emergency meeting of Arab foreign ministers to discuss the situation in Jerusalem. A few rockets were fired from the Gaza Strip into Israeli territory.

Protests broke out in some Arab communities in Israel such as Umm al-Fahm, where dozens of residents protested the conflict. The demonstration gave rise to vandalism and rock-throwing as the police tried to disperse it. Mayor Samir Mahamid arrived at the scene to confront the protesters and send them home. More protests took place outside of Israel, with dozens of people marching outside the Israeli Consulate in New York.

The unrest brings up memories of Operation Guardian of the Walls in May 2021. That conflict, which also broke out toward the end of Ramadan, also started with unrest in Jerusalem and Al-Aqsa. The broad IDF operation inflamed the Gaza Strip and several mixed cities in Israel such as Lod, Ramle and Acre.

There was also the second intifada within the Palestinian Authority and the October 2000 events in Israel that broke out after then-Likud chair Ariel Sharon visited the mosque compound.

The events emphasize the importance of Al-Aqsa Mosque to not only the Arab public in Israel and the Palestinian Authority, but the entire Arab world. If anything can ignite the Middle East, it is unrest and violation of the status quo at Al-Aqsa Mosque.

Reda Jaber, director of the Aman Center against Violence in the Arab Community, told Al-Monitor, “There’s an underestimation among the Jewish community in Israel of the deep emotional and identificational importance of Al-Aqsa Mosque for Muslims and Arabs in general and Palestinians in particular. This underestimation is very dangerous, since beyond the religious importance that is a significant factor, the Al-Aqsa Mosque has also deep dimensions for their national identity. … The equation is: you take away Al-Aqsa Mosque, you take away the core of their identity.”

Sheikh Samir Assi, former imam of the Al-Jazer Mosque in Acre, observed in conversation with Al-Monitor, “Al-Aqsa Mosque is considered the third most important in Islam after Al-Haram Mosque in Mecca and the Mosque of the Prophet Mohammed in Medina … which is why we witness a lack of restraint among Muslims in all that’s connected to Al-Aqsa Mosque compound. Muslims must be allowed to pray at their sites of worship in peace.”

Sheikh Kasem Bader of the Druze faith also spoke out against the unrest in a news interview, “By what right do they invade Al-Aqsa Mosque? Why bother someone who is fasting and praying? Leave him in peace and let him exercise his freedom of religion. We don’t see young Muslims or Christians approaching the Western Wall to pray.”

Some in the Arab community and the Arab world have also sharply criticized the masked youths who hid inside the mosque, threw rocks or played soccer at the mosque, an act that violates the sanctity of mosques in Islam.