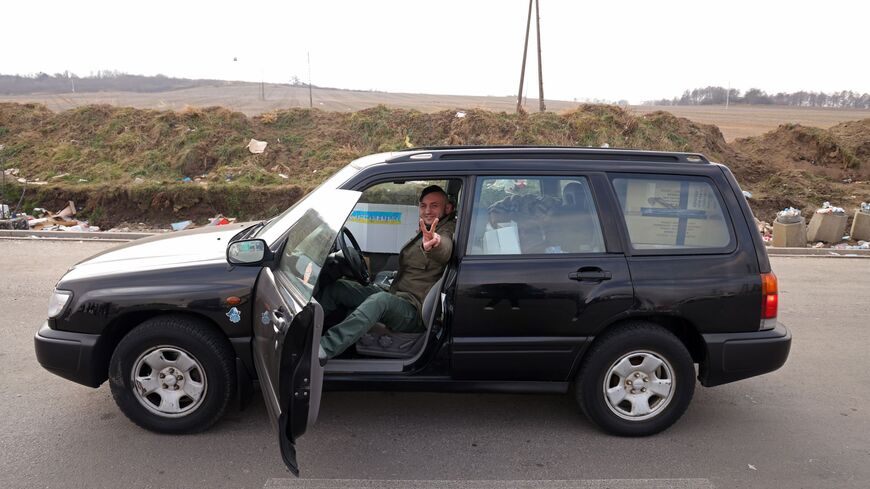 Roman, 35, a Ukrainian living in Poland, makes a victory gesture as he waits to cross into Ukraine to join the armed resistance against the Russian invasion on March 4, 2022 in Medyka, Poland. - Sean Gallup/Getty Images

Palestinians and their supporters have for years criticized Western countries for only giving lip service to ending the occupation, while financially, military and politically supporting the Israeli occupiers.

Statements in support of their rights rang hollow as the world community tried to legally ban boycotts and declared that politics should not touch sports and that sanctions should not be used against a country that professes to be a democracy.

Israeli attacks on media, medical personnel, and civilians were called unintentional collateral damage, or the result of the occupied people using their own citizens as shields. Western countries and media often used the exact terms of the Israelis to describe resistance as being acts of terror. Even diplomatic initiatives were dubbed “diplomatic terror.”

Until Ukraine. Suddenly, women preparing Molotov cocktails are media heroes. Sanctions are not only used against the army or political figures, but even extend to sports. Russia is being accused of war crimes, and even the International Criminal Court is paying attention. The Red Cross is putting out public service announcements reminding the Russian occupiers of their obligations according to international law.

The double standard is no longer a theoretical issue but an open show of hypocrisy by the international community, which did little to nothing to oppose the occupation of Palestinian territories.

PLO executive committee member Hussein Al Sheikh tweeted, “When #color, #religion, and #race become an #identity, its when values, morals, and #humanity are lost. When #international legitimacy is violated by two standards, #justice is lost, rights are destroyed, and power has become a tyranny.”

Jordanian writer Rula Samain noted, “I have been saddened because we have been calling for boycotts, but no one stood by us. Palestine is in my heart.”

From Lebanon, media critic Magda Abu-Fadil documented the racism of the Western media in an article published on Medium titled “Media bigotry loud and clear in Ukraine was coverage.” She wrote, “The ignorance, arrogance, and racism dripping from Western foreign correspondents’ and anchors’ mouths covering the Ukraine story in recent days will provide media ethicists with case studies for years to come.”

Her article was full of quotes of journalists who uplifted the Ukrainian resistance and sympathized with the refugees in a clear difference from the way Palestinian resistance is covered or the way Arab and Muslim refugees are referred to.

Dima Khatib, a senior Palestinian journalist in Doha, told Al-Monitor that it turns out that resistance is allowed if you have blue eyes. "It seems we are not ‘civilized’ enough and not ‘white’ enough and our eyes ‘are not blue’ enough. Of course, resistance to occupation is now legitimate and people going to the streets with guns is not only allowed but worthy of praise, punishing the attacker is now logical. Oh, if we were a different color, we would have become heroes and not terrorists.”

Even South African comedian Trevor Noah spoke up on an episode of the Daily Show. “I was shocked to see reporters around the world, by the way, seem to think it's more of a tragedy when white people have to flee their countries because, I guess, what? The darkies were built for it? The words and images do reflect a clear bias of the world community. We are told that Ukrainian victims are different because they are 'civilized.'"

We are seeing a stark comparison in the way invasion, occupation, resistance, and international law are handled. In one end is unprecedented use of every diplomatic and political tool against the Russians. On the other hand, long-running demands for much milder actions against Israel have been rejected by Western countries. Such clear racist attitudes toward the Palestinian predicament can be clearly seen and are an even bigger source of frustration.